A climb with bite

A perilous air drop, then onto a treacherous path to a coveted peak 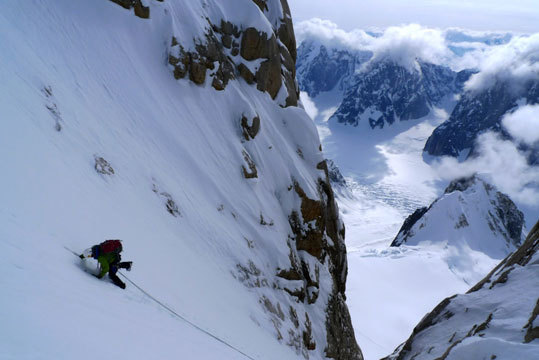 (Kevin Mahoney for The Boston Globe) An unknown climber ascends the final stretches of Ham and Eggs with the Ruth Gorge in the background.
By Brian Irwin Globe Correspondent / August 8, 2010

ANCHORAGE, Alaska — “Talkeetna one-niner, what are the winds doing?’’ inquired Paul Roderick, a pilot for Talkeetna Air Taxi, one of a few bush plane operators that ferry mountaineers deep into the glaciated Alaska Range that skirts Mount McKinley, the highest peak in North America.

“Gusts kicking up out of the northwest,’’ the tower replied from the dilapidated hangar that is its office in Talkeetna.

“Hope all that training pays off,’’ Roderick said as he turned and shot me a cocky smile. He was flying me and my climbing partner, Conrad Yager, in a 1975 cherry-red, eight-passenger, single-prop Otter that wore skis instead of wheels. Twenty-five gut-jostling minutes later we weaved through 4,000-foot-deep gorges carved by a maze of moving ice rivers. Giant walls with thin, ephemeral runnels of ice framed the view as Roderick banked the plane steeply, directly into a blind-ending pocket glacier. Our landing spot was flanked on the right by a ridge, straight ahead by peaks known as the Eye Tooth and the Bear Tooth, and on the left by our objective, one of climbers’ most coveted peaks: the Mooses Tooth.

Lacking an apostrophe because of a still-uncorrected cartographical error in nomenclature, the Mooses Tooth, was first climbed in 1964, by a German party. In 1975 Jon Krakauer, who would go on to write “Into Thin Air,’’ and friends made the first ascent of the most direct and safest line to the summit, a 2,500-foot groove of ice, rock, and snow they named Ham and Eggs. The climb was remote, requiring weeks of hiking to reach it.

Roderick, seeing an opportunity in shortening the approach to 30 minutes by dropping his plane onto this frozen bowl, pioneered the area for paying customers. Today, this one-shot-or-death landing strip known as the Root Canal Glacier is how almost everyone gets to the climb. Weather permitting, this once extreme adventure can now be done in a weekend from Anchorage.

Our plane drifted over deep crevasses just a hundred feet below, onto the smooth belly of the glacier, and coasted to a stop. Five minutes later we sat next to 200 pounds of gear and 10 days’ worth of food as the Otter took off, spraying us in dry, cold powder. We were left to melt snow for drinking water, pitch tents, and start erecting protective walls of snow bricks in the event of a storm. We weren’t alone on the glacier. A few other parties had already dug in, waiting for good weather. Three of the teams consisted not of climbing partners like us, but rather of climbing guides and their clients.

Successful ascents of climbs like Ham and Eggs are considered milestones by many climbers. Ham and Eggs has steep snow, up to 70 degrees, which can collapse or avalanche under a climber if tested in unsafe conditions. There is technical ice climbing that at times is not just vertical, but overhanging. Ham and Eggs isn’t a trail to the top of the Mooses Tooth. It’s not a winding glacier trek like the guided walks up Mount Rainer or Mount Baker. It’s an intense, technical ice climb, complete with two-ice-ax climbing, groveling, and twisted and tangled ropes. It’s 20 full rope lengths and typically takes 24 hours to get up and rappel down. There’s no other safe way off the Tooth.

Kevin Mahoney flew in the day after we arrived, the third guide to set up camp. He and I happen to live in the same New Hampshire town, but this was no neighborhood party. Mahoney was working. His job: Cook tons of food, get his charges safely to the top of the Tooth . . . and get them back down. His clients were a father and son, Dale and Ben Schmidt of Berkeley, Calif. The next week Ben had his prom. He was 17 and his attendance at the dance was more important than the slot of ice that loomed above him as he ate a chicken and cheese quesadilla. His father had climbed the Tooth five years ago; his mother, Dori, climbed it last year.

Guided mountain adventures have exploded in the last few decades. Price tags of $60,000 are common for the few hundred climbers that scale Mount Everest each year, a climb that takes 70 days. A guided climb up Ham and Eggs would range from $3,500 to $5,000. Domestic one-day hikes cost about $275. Guiding agencies are available to advise clients on how to train for big climbs and to take care of logistics, from warm bottles of tea to fresh fish and wine in base camp tents.

Not only have guided climbs become more popular, but their difficulty has increased. Routes like Ham and Eggs, a proud achievement for an average climber like myself, are being scaled by clients with few peaks under their harnesses. And they’re doing so safely.

The mountain guiding industry has had its dark days. Tragedy has struck guided parties on the mountains of every continent. Perhaps no accident is more notorious than the one on Everest in 1996 that claimed eight lives, and which made Krakauer famous. A member of the climbing team, he was working on a story for Outside magazine about the commercial guiding industry on the mountain. He later expanded the article into his bestseller.

But here on the Root Canal, at the base of the route Krakauer first climbed, mass-scale organized guiding and a summit-or-death attitude are absent. Guiding here is different. It’s personal.

Mahoney runs his company out of his barn. His style is uniquely fun and rugged. He offers beginner climbing programs and seminars, but it’s on big alpine routes like Ham and Eggs where his confidence emerges, smoothing for the Schmidts what is a serious climbing route into a seriously fun vacation.

Mahoney, 41, has been guiding for 16 years. He has established two new routes on the Mooses Tooth and climbed it five other times on Ham and Eggs. One of his climbs is a harrowing route named Arctic Rage that was nominated for the Piolet d’Or, or Golden Ice Axe, the world’s most prestigious climbing award for the best new route. For Mahoney, in terms of difficulty, Ham and Eggs is a field trip.

When the alarm’s annoying ring went off at 4 a.m. so we could start the climb, it didn’t feel like a field trip to me. Yager and I roped up, silently double- and triple-checking our knots — and each other’s. The sun was starting to rise. In late May there are only a few hours of darkness in Alaska. It was below zero.

There is a certain apprehension starting a big climb. It reminds me of being a young boy and preparing to jump off the high dive when you know the water’s cold and you are a little nervous. Yager led up the first pitch, scratching steel ice-climbing tools against the cold stone, trolling in little cracks for firm enough purchase to pull his body up a few inches, where he would repeat the move. Firmer ice followed, as we planted our picks into the blue substrate and gingerly crept up the giant wall. I quickly realized how big this peak was. Ham and Eggs was no snack.

Far below I could see the glow of the stove in Mahoney’s cooking tent. The Schmidts were enjoying a hot breakfast, after which Mahoney would happily stroll them across the Root Canal and up into the narrow gully that was the route. Dale would suffer cramps and turn back to camp, but Ben continued on, swiftly following Mahoney’s lead up the slot and rapidly gaining on Yager and me.

We moved up carefully but efficiently, scaling rope length after rope length of hard ice, sugary snow, and gristly rock. Yager, an accomplished New Hampshire guide, led the two of us up a thrilling, overhanging curtain of rotten ice, suffering the barrage of snow crashing down on his head as he pulled through the difficult moves. More of these sections followed, alternating with steep, insecure snow climbs. Scrappy rock sections interspersed the frozen medium, our steel crampons skating on granite and releasing a spark and puff of ozone with each desperate move. Far below, I heard laughing.

It was Mahoney. As if hiking up an easy trail, he eased over the icy countertop and shouted down to Ben, who was out of sight. “Come on up, buddy. You’re on belay. It’s super fun.’’

For the remainder of the climb we were just ahead of, or just behind Mahoney and Ben. The pair eased up the gully smoothly, smiling when the sun poked through, laughing when the heavy downpour of sloughing snow filled their hoods from above. Ben was plugging along, picking his way up thousands of feet of snow and ice.

At around 8 that evening Yager and I sat at the top of Ham and Eggs. Looking down at the whirling glaciers, I sipped stale water and forced down an energy bar. I tried to mentally prepare myself for an evening’s worth of rappelling, any one of which could, if not executed properly, result in the last and longest slide of my life. On the snowy summit ridge above me I heard Mahoney’s characteristic cackle, followed by Ben’s cheer.

Ben had touched the crown of the Tooth. He made it back home, safely, just in time for prom.

Brian Irwin can be reached at irwin08@myfairpoint.net.

What to do
Climb the Mooses Tooth or hundreds of other mountains, their difficulty ranging from flat glacier walks to steep ice, from sunny rock climbs (yes, even in Alaska) to ski tours. The only times of year you can climb Mooses Tooth safely are late April to May.
Guides
Mahoney Alpine Adventures
603-387-3879
www.newhampshireiceclimbing.com
Alaska Mountaineering School, LLC
13765 Third St.
Talkeetna, Alaska
907-733-1016
www.climbalaska.org
Where to stay
Talkeetna Air Taxi bunkhouse
14212 East Second St.
907-733-2218
800-533-2219
www.talkeetnaair.com
Hostel-like lodging. It’s free and clean.
Swiss-Alaska Inn
F Street
907-733-2424
www.swissalaska.com
Close to the airstrip and Talkeetna Air Taxi. Delicious food and ambience. Doubles $95.
Where to eat
Talkeetna Roadhouse
Main Street
907-733-1351
www.talkeetnaroadhouse.com
Part library, part diner, part lodge. Breakfasts are huge and classic. You can order eggs any style, but they all arrive scrambled and delicious. Eat up or shut up. The eats are so good you won’t be talking anyway. $8.50-$14.75.
West Rib Pub and Grill
907-733-3354
www.westribpub.info
A juicy burger here after your climb is requisite — and the best bite you’ll have for months. $8.75.