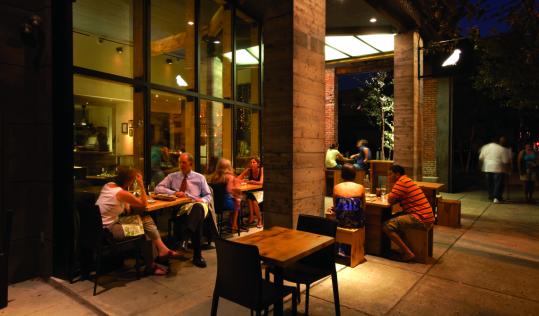 Patrons sit outside at the eco-conscious 732 Social, where the food is seasonal and sustainable. At Proof on Main, a bronze satyr sculpture perched on the bar greets visitors.
By Liza Weisstuch Globe Correspondent / April 25, 2010

LOUISVILLE, Ky. — Blame the macaroni and cheese. It takes your expectations of a Louisville restaurant and tramples them as mercilessly as a horse’s hoofs on the dirt track of .

On a Tuesday night on East Market Street, the signature dish at 732 Social sounds like familiar comfort food. Add a side of crisp, blackened Brussels sprouts, the ones chef Jayson Lewellyn has grown in a greenhouse in the off-season, and you would seem to have a standard Southern meal. But the seven-cheese sauce, browned on top and flecked with sustainable rock shrimp, practically bubbles over the edge of the scalding crock. . The silken blend is made with global cheeses — mostly Spanish and Italian — all of which are sourced from dairies that subscribe to environmentally sound practices.

Order one of the special cocktails from the bar, preferably John Henry’s Hammer, made with Old Forrester Signature Bourbon and the house allspice bitters and apricot syrup and served over a meticulously carved ice ball, and it’s clear that you’re a far cry from the twangy bluegrass-infused Louisville of legend. The Hot Brown, a stacked-high, open-face sandwich that’s long been the city’s culinary delight, suddenly seems as relevant as a bag of Doritos.

Each year, the Kentucky Derby, which happens next Saturday, draws more than 1.5 million people to the city. But thoroughbreds aren’t the only reason to visit Louisville. Chefs and bartenders around town are invigorating Southern culinary tradition with inventive fare. Taking cues from global customs, they make the most of the local bounty.

Social is on the ground floor of the Green Building, a brick warehouse built in 1850 that was gutted and turned into a LEED-certified mixed-use facility that also houses offices and a gallery. It’s owned by Gill Holland, a movie and record producer and activist, who has pioneered the transformation of East Market District into an artsy strip steeped in Boho vitality.

In keeping with other urban neighborhoods rechristened when they boost their cool quotient, the area is now referred to as NuLu (shorthand for New Louisville). Here, farm-to-table is the new “meat and three,’’ a Southern term for a heaping plate of protein and three veggies.

The high-ceilinged restaurant embodies NuLu’s ethos to the max, from its menu options to share (they don’t call it “Social’’ for nothing) to the eco-conscious design. The slabs of wood that serve as the bar top, tabletops, and barstools, even the coasters, are made from American oak reclaimed from a Lexington tobacco barn.

Under Lewellyn’s watch, the crew in the open kitchen does a nightly tango with sauté pans, manipulating seasonal crops, beef from Kentucky grass-fed cattle the chef had a hand in raising, and, of course, the indigenous whiskey. To make the au poivre sauce, Lewellyn uses bourbon in lieu of the customary cognac.

One thing that holds firm to tradition, though, is the unfaltering Southern hospitality. “A lot of people who visit from out of town think everyone here is putting on their Derby face for tourists, but we’re really like that all year long,’’ Lewellyn said.

While most of what he creates is grounded in Gallic passion and French peasant cooking technique, he adapts everything to local, sustainable products. And don’t expect to see fancy French terminology on the menu scribbled on chalkboards. “Steak frites’’ is as Gallic as it gets.

On Lewellyn’s recommendation, I stroll down East Market street to the Mayan Café, where Bruce Ucan turns the overlooked, if not maligned, lima bean into morsels of smoked earthiness. For his signature tok-sel lima beans, he roasts them in metal barrels, then flash-cooks them with parsley and pumpkin seeds, and finishes them with scallions and lime juice.

The Mayan also shows how globally-minded chefs who arrive in Louisville end up staying and garnering faithful followings. Ucan applies his proficiency with the slow-roasted meats and vegetables he was raised on in the Yucatán Peninsula to local crops. And then there are his moles. Each day, he creates a different iteration with chilies particular to regions of Mexico, so meat and fish plates are always changing.

The dynamic dining is not limited to NuLu. More and more restaurants have opened downtown. Arguably, Louisville’s culinary transformation started with Proof on Main, the bar in the 21C Museum Hotel that opened in 2006. This vibrant space off the hotel’s lobby doubles as a modern art museum.

Situated on historic West Main Street, this is one of the nine restaurants that make up the Urban Bourbon Trail, a program launched in 2008 that spotlights restaurants offering at least 50 bourbons. (Pick up a “passport’’ at the tourism office, get a stamp for a whiskey drink at each outpost, and redeem for a spirited prize.) We tucked into the bar, where a roster of whiskey cocktails are on offer. This is a fine place to sample Kentucky’s famous spirit. The bartender catches me pondering too long over the list and comes to the rescue. “Do you like sweet? Spicy? Smoky?’’ he says. “Yes,’’ I reply. He nods and puts together a flight of three bourbons.

Chef Michael Paley brings a Tuscan accent to Southern fare, so a pour of rich, amber bourbon complements everything from a rustic starter of roasted octopus with garlicky fondue-like bagna cauda dip, to heartier dishes like the whole roasted branzino, or European seabass, with Southern fixings.

When it comes to bourbon tasting, nothing rivals Bourbons Bistro, another stop on the bourbon trail and just a quick cab ride away. It opened five years ago, but with its dark wood paneling and antique bar and mantel holding upward of 140 bourbons, it has the air of a neighborhood institution. Chef Michael Crouch whips up whiskey-kissed complements.

“I quote my boss, who says there’s no such thing as a bad bourbon, just better bourbon,’’ Crouch said.

If nibbling on his bacon-wrapped roasted figs stuffed with brie and finished with a bourbon thyme gastrique doesn’t defy your expectations of this city, you might need a glass of whiskey that isn’t commonly found in bars at home to change your mind.

Try Rock Hill Farms, a sweet mellow tipple laced with smoke made down the highway at Buffalo Trace distillery in Frankfort. The restaurant’s owner John Morrrison insisted I try it: “You know, it’s Kentucky. It’s bourbon. It’s what we do.’’

Liza Weisstuch can be reached at lizashayne@yahoo.com.

Where to eat and drink
732 Social
732 East Market St.
www.732social.com
An ideal spot to sample forward-thinking food and drink with firm roots in tradition. Don’t miss the mac-n-cheese, $14, or an expertly crafted cocktail, $9.
The Mayan Café
813 East Market St.
www.themayancafe.com
The tok-sel lima beans are a must, $3.
Proof on Main 702 West Main St.
www.proofonmain.com
Italian cuisine, a stop on the Urban Bourbon Trail. Daily special $18-$36.
Bourbons Bistro
2255 Frankfort Ave.
www.bourbonsbistro.com
Nearly every appetizer, $6-$13, and entree, $11-$32, goes with whiskey. Choose from over 140 bourbons.