Off the coast, the word is ‘Shhhh’

Hundreds of islands harbor a bounty of fish and beaches 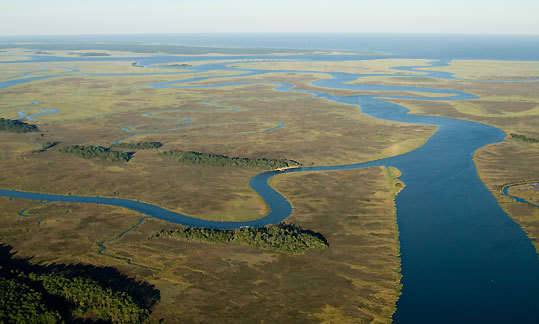 (Private Islands of Georgia ) Eagle Island with the Darien River above it and the Atlantic Ocean on the horizon.
By Patricia Borns Globe Correspondent / February 21, 2010

SHELLMAN BLUFF - If there’s a place where “Keep this a secret’’ comes to mind, it’s the Georgia coast, strung with barrier islands as big as Bermuda, and back islands - 1,600 of them - as large as hundreds of acres to the size of a pickup truck. To find so many wildly beautiful islands in one state is remarkable enough, but it’s the fishing that draws anglers here.

Around and between the islands, a mighty 8-foot tide flushes 378,000 acres of salt marsh with brackish, food-rich water: the chemistry of a great fishery. In May schools of 60 to 100 redfish start cruising the mud banks. In June, tarpon over 100 pounds roll a boat-length away. Tripletail, a fine fighting and dinner table fish, lie inches below the surface, and a kingdom of critters, from snowy egrets to wild boar, join in the feed. “It’s the last East Coast outback,’’ says Steve Holley, a tournament sportsman who manages a fishing camp here.

My family and I loaded up the car and headed to Holley’s neighborhood, the Bluffs: Shellman, Contentment, Pleasure, and Dallas bluffs, to name a few. On a coast known for fishing, the unincorporated speck north of Brunswick is one of three hot spots. Although resorts and mega-yacht marinas have yet to find the Bluffs, Georgians have fished here for over a century. At Contentment Bluff run by Holley, they rent the circa 1930s cabins or spend weekends in trailers with gleaming center-consoles in tow.

In Shellman Bluff Lin Rogers poured a Jim Beam and soda and handed us the keys to Moonpie Cottage. Rogers, who drives a 1998 Cadillac DeVille with 81,000 miles on it and a golf cart with twice that, manages the area’s best portfolio of vacation rentals, ranging from Airstreams to designer homes.

On the water, the Bluffs rise out of the spartina grass on the Julienton and Broro rivers. While my family slept in, I took my first tidewater turn, sight-fishing for reds, with Captain Scott Dykes and his friend Ronnie Chambers. A lemon sun rose as we pulled away from “downtown’’ Shellman’s waterfront of boat lifts and the Shellman Fish Camp store, where a Coke costs 60 cents. Due east, Sapelo Sound stretched emptily. A hard current dragged the buoys, and brown, detritus-rich creeks snaked in dizzying array.

“Let’s try 153,’’ said Dykes, referring to an Intracoastal Waterway marker. A good 60 hungry redfish schooled alongside the bank, too big for keepers but great sport. Next we nudged against a mud flat Dykes had recently discovered and cast to the fish moving toward us, their tails flashing above the shallow water's surface as they grubbed the bottom for food.

On the west side of Sapelo Island, we poled into a beauty spot like an enchanted glen. Locally known as “the Chocolate House,’’ its name comes from a remnant visible from the water of the 18th-century Chocolate Plantation, whose main house, commissary, barn, and slave huts are among the largest examples on the Georgia coast of tabby construction (a centuries-old material made from equal parts lime, water, sand, oyster shells, and ash). Close by were 4,000-year-old shell rings left by Paleo-Indians who used Sapelo to fish and hunt. A ferry service in nearby Meridian takes visitors to Sapelo, where Georgia State Parks guides and members of the historic Hog Hammock community offer tours.

While I fished my family was making new friends on shore. They strolled the Bluffs’ oak-draped sand streets, bought Georgia wild shrimp at Dockside Seafood, and went to the beach across from Rogers’s dock known as “Redneck Riviera’’ - a sandbar midriver that appears and disappears with the tide. I found them in the late afternoon happily ensconced with the local crowd at waterside Hunter’s Café.

Georgia’s true beaches are on its barrier islands. If you need a ride, Henderson Hope can take you to Blackbeard Island, the closest to the Bluffs. With his wife and first mate, Julianne, he carried us and a picnic basket into Blackbeard Creek. Unlike many creeks that cut into the barrier islands, this one runs through to the ocean. While anglers fish from its banks, families can see gators and bald eagles from the water, spot wild hogs on the hiking trails, and gather sand dollars on the 7-mile ocean beach.

The next morning the wind was whipping, but we were determined to fish. Dykes moved the flats boat to a protected hole and tied off to a stake in the mud. The reds struck immediately, and we played them, one right after another, until the tide nearly grounded us. Poling our way out was brutal, but we were too happy to care.

As you ascend the F.J. Torras Causeway to St. Simons Island, look below to the five tidal rivers and miles of marshland, and you’ll know why Civil War-era poet Sidney Lanier wrote, “. . . with a step I stand, On the firm-packed sand. Free! By a world of marsh that borders a world of sea.’’ You’ll also know why the fishing is so rich in the waters bounding St. Simons and Jekyll islands.

“It’s a mystery,’’ Captain Greg Hildreth says as to why more tripletail are drawn to the north end of Jekyll Island than to any place on the Georgia coast. Georgians look forward all year to March and April when these fish move inshore. Floating on their sides at the water’s surface, as if mimicking a patch of seaweed to attract minnows and shrimp, tripletails look like garbage can lids until hooked, when they leap, literally and beautifully, into action.

Fish aren’t all that draw anglers to St. Simons, where Hildreth and fellow guide Mark Noble are based. Noble says his clients, especially couples, like what they find on terra firma: a cosmopolite’s mecca of exquisite boutiques, A-1 bentgrass fairways, and polished resorts (the King and Prince Beach and Golf Resort is a popular anglers’ base). On weekends here you might see a few more boats fishing in the vicinity of your chosen drop (fishing hole). But compared with Florida, this is still the Twilight Zone.

If, on the other hand, you tend to the intimate end of quiet, come to the back-in-time village of Darien where Andy Hill will pilot you to a private lodge on Eagle Island, lost in the Darien River marsh. Hill offers this and other island and mainland properties with concierge services that can include a boat to keep at Eagle’s private dock if you didn’t trailer your own. He connected me with Captain Wendell Harper at Two Way Fish Camp, both legends here.

A five-minute drive from downtown Darien, Two Way is named for its location on the Altamaha River where you can fish two ways: upstream in fresh water for largemouth bass and 30-pound flathead catfish, or downstream for saltwater species. This is the northernmost range for tarpon in great numbers, where the river runs to a brackish confluence with two national wildlife refuges at its mouth. In summer, you can be fishing tarpon in the morning and tailing reds on the afternoon high tide. Harper, who bends his own hooks and has no need for a fish finder or GPS, does it all, including trapping alligators with a rod and reel. “Snag ’em with a treble hook and hold on for the ride,’’ he says.

One winter day when his friends were frozen to their bar stools at Mud Cat Charlie’s, a popular restaurant here, Harper showed me some drops around the Hampton River. With St. Simons, Little St. Simons, and Sea islands for a backdrop, I felt like the paparazzi, casting to the banks of properties owned by former Treasury secretary Henry Paulson and golfer and course designer Davis Love III.

On a private plantation where former president Carter enjoyed vacations, a large party had gathered around a bonfire on the creek bank. I could hear the ice clinking in their glasses as we drifted yards away.

“I’m no fisherman,’’ a voice carried from shore.

Lucky us. With less than an hour before twilight, we caught 10 spotted seatrout for dinner here.