Escape to a winter haven 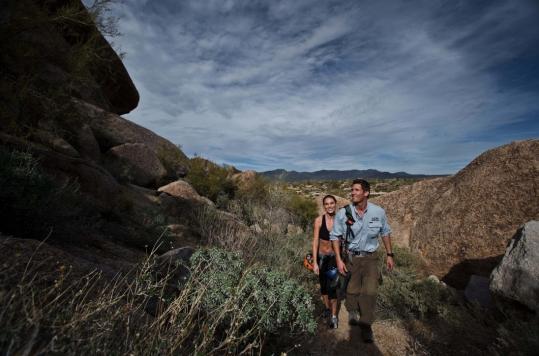 Guests at The Boulders, a resort in the red rocks of Carefree, Ariz., can hike, golf, or go to a spa. (The Boulders)
By Hilary Nangle Globe Correspondent / January 24, 2010

Even those who embrace winter are pining for a bit of sunshine and warmth about now. Here are three destinations ideal for an escape.

Cave Creek’s western heritage is well documented in the local history museum, with exhibits on prospectors and mining, cowboys and Indians, and desert flora and fauna. Winter temperatures, which hover in the 50s to 60s, are ideal for hiking to see Hohokam sites and petroglyphs. “The area was once a haven for gold miners, so you’ll see remnants of that in the hills,’’ says Jackie Dishner, author of “Backroads & Byways of Arizona.’’

One of her favorite hikes is the Jewel of the Creek Preserve in the Spur Cross Ranch Conservation Area. “It’s located in a desert wash that crosses the creek. On one side of the creek you’ll see a mesquite bosque [Spanish for forest], and on the other side a field of saguaros and other desert plant life. If you get an early start, you might see coyotes, javelinas, or rattlesnakes.’’

Be wary of the cholla cactus, she cautions: “It just takes a quick and light rub against one of those little balls of furry white prickers to have it stick.’’

For homestyle comfort in a budget-friendly B&B, book a room at Full Circle Ranch (877-465-7570, www.fullcircleranch.com, winter rates $160-$260). For full service, complete with golf course and spa, stay at The Boulders (888-579-2631, www.theboulders.com, winter rates begin at $239), a sprawling resort set amid impressive red rocks in neighboring Carefree.

Book a direct flight from Boston to Phoenix, then rent a car.

Golfing in St. George, Utah
St. George may be best known as home to Zion National Park, but there are 12 golf courses within a 15-minute drive. “People are amazed at how good the golf is here at such an affordable price,’’ says Randy Cassidy, an avid golfer and former resident.

Cassidy thinks the two best options for serious golfers are Coral Canyon, a public course with views of Bryce and Zion national parks, and Entrada, a private, 18-hole Johnny Miller signature course open to those staying at its inn. “Both are spectacular courses, especially for those coming from the East Coast and willing to spend some money to play.’’ Coral Canyon, a Keith Foster-designed 18-hole course, is his favorite. “If you pick the right tee box to play from, you’ll have a fantastic day.’’

Bloomington is a good choice for those who favor Eastern-style courses. “You’d think you were playing back East. It’s an older course with an old country club feel,’’ Cassidy says. “It’s a bit of a throwback, because it was built before water usage was an issue.’’

While golf is the big draw, the red rock canyons are a lure for hikers and mountain bikers, especially in winter, when temperatures hover around 60. Add spas, and St. George makes a good choice for any group’s non-golfers. “There are quite a few very nice fitness spas; Fitness Ridge, in nearby Ivins, has received attention from the TV show ‘Biggest Loser,’ ’’ Cassidy says.

As for night life, he says most folks drive 30 minutes south to Mesquite, Ariz., for a cheap meal and to play blackjack or slots.

The Inn at Entrada (435-634-7100, www.innatentrada.com) also has a full-service fitness center and spa. The Experience Entrada Golf Package includes two nights in a studio casita, two rounds of golf, a $50 restaurant voucher, and gift basket, with rates beginning at $499. Another option is Red Mountain Resort & Spa (877-246-4453, www.redmountainspa.com). The Signature package includes accommodations, meals, and healthy options, including guided hikes, unlimited fitness classes, and more, beginning at $189 per person, per night, through Feb. 28; room only with breakfast begins at $149, single or double.

Book a direct flight from Boston to Las Vegas, then rent a car or arrange a shuttle, or fly to St. George through Salt Lake City.

Girlfriends’ getaway in Delray Beach, Fla.
Delray Beach on Florida’s “Gold Coast’’ delivers sand, sun, and shopping. Back in the 1940s, Delray was a hip arts colony, and that spirit lives on. Boutiques and galleries line downtown’s Atlantic Avenue, spilling over to Pineapple Grove. On the coast, palms fringe two miles of sun-drenched public beaches, with cabana and umbrella rentals for a song.

When girlfriends visit spa-travel specialist Judy Kirkwood in her adopted hometown, she guides them to the sites the guidebooks don’t reveal such as Second Time Around on SE 4th Avenue. “It’s great for Lilli, Ferragamo, Louis Vuitton, and Dooney & Bourke,’’ she says. Sometimes she ventures farther north. “It’s always fun to walk out of Goodwill in Palm Beach, 20 minutes away, with a $20 Coach purse.’’

Another plus is the multitude of spas and yoga studios. Kirkwood is a fan of the Seagate Hotel and Spa, a new boutique hotel on stylish Atlantic Avenue. “It’s heavenly. I love the exfoliating rain massage. And afterwards, dine on ‘the Ave.’ in the hotel’s patio restaurant.’’

Her favorite yoga classes are at Simply Yoga on Federal and YogaFox, which offers Sunday morning yoga with live music at the Colony Hotel and classes at The Buddha Lounge on Federal. For a total workout, Kirkwood recommends Powerbarre in Pineapple Grove. “Its combination of yoga, ballet, and Pilates is guaranteed to make you walk taller, with a tighter butt.’’ Reward yourself afterward with a glass of wine and a Southwestern chicken wrap from the Brulé Gourmet Market and Bistro.

For those whose flights arrive late, DaDa is open for outdoor dining until 2 a.m., and for those in town on Sunday morning, brunch at the Sundy House, a historic boutique inn, is a must.

Old-style Florida grandeur is the hallmark of the Colony Hotel and Cabana Club (561-276-4123, www.thecolonyhotel.com/florida), an elegant and historic gem located in the downtown shopping district; winter rates begin at $209 in February, including breakfast and parking. The Seagate Hotel and Spa (877-577-3242; www.theseagatehotel.com), a swank, luxury boutique hotel, opened in November; winter rates begin at $349 in February. Both are on Atlantic Avenue and both have private oceanfront beach clubs.

Fly direct from Boston to West Palm Beach, then rent a car.