An economic staple is rich fodder for historical exploration 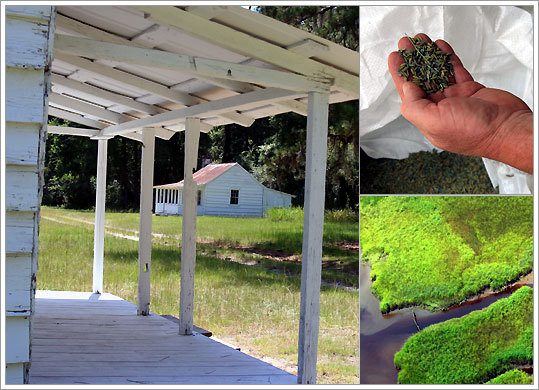 From left: Friendfield Village at Hobcaw Barony was a slave village; a blend of Carolina Gold and fragrant Indian basmati rice; the rows and many canals in rice fields were dug by hand. (Photos by Patrica Borns for the Boston Globe)
By Patricia Borns Globe Correspondent / July 26, 2009

CHARLESTON, S.C. -- “Even the emperor of China preferred our rice,’’ said guide Fred Auld, peppering us with rice factoids as he swung onto Broad Street where the Exchange and Provost, a former customs house, looms like a vision of British West Indies past.

Talk about seeing the world in a grain. The crop that made South Carolina America’s richest colony runs through restored plantations, food, a language, and lives here. You’ll find it at Magnolias in a forkful of creek shrimp perloo flecked with Carolina Gold, on a kayak in old rice canals, and at Charleston Cooks where silver-plated rice spoons and Karen Hess’s “The Carolina Rice Kitchen’’ fly off the shelves. Although there’s no designated trail that I’m aware of, as I traveled from Charleston to Georgetown, the roads led to rice.

“Wherever there was water, rice was planted. It changed the land completely,’’ said Kristina Poole, Middleton Place outdoor director, as I trailed her on a paddle up the Ashley River. “But where most human developments harm wildlife, rice left us richer in plant and animal diversity,’’ she said.

Her colleague Clint Noren confirmed this with a worried glance at his newly sown rice paddy, which along with the Versailles-like gardens and ancestral house museum interprets Middleton plantation life. “Unfortunately, rice is a favorite of the bobolink. Slaves had to stand watch with shotguns to protect the harvest,’’ he said. Now I know where the term rice bird comes from - and that Southern edible, rice bird pie.

Once an avoided subject, rice’s other half, slavery, has found expression everywhere, from the outpouring of books and DVDs in Charleston’s Avery Museum gift shop (at Avery Research Center for African American History and Culture) to interracial reunions of slaves and planters’ descendants. In a restored slave cabin, a wall display recognizes the Middleton’s former slaves by name. “It reminds me of the Vietnam Veterans Memorial,’’ a woman next to me said. A few miles away, Magnolia Plantation, world-renowned for its camellias, with sister property Drayton Hall, has also researched its slaves’ histories and made them available to help descendants trace their ancestors.

Nichole Green directs the Old Slave Mart Museum on Chalmers Street, one of 40 former auction sites within three Charleston blocks. Green’s ancestors, like first lady Michelle Obama’s, were Santee River slaves. “I thought I knew rice. But it wasn’t until I went out there in the 103-degree heat with the alligators and water moccasins that I totally got it,’’ Green said.

By “out there’’ she meant Ravenel Caw Caw, a county park where cultural historians Shawn Halifax and Thomas Thornton showed me how swamps were hand-cleared, banked, ditched, flooded, and drained in a hydraulic rice growing method used for centuries in West Africa - “a method that increased yields by 1,000 percent,’’ Halifax said. Even the seeds known as Carolina Gold were from Africa. (For the first time in 100 years, rice from the heritage seeds is being grown in the state at Carolina Plantation in Darlington. Find it in local stores or at carolinaplantationrice.com.) As we traipsed among abandoned paddies and cypress-tupelo swamps, he pointed to a rivulet running like an arrow through a spartina field. It wasn’t a creek, but a quarter-drain. Suddenly, like Green, I got it. If it’s straight, it’s man-made.

When Charlotte Jenkins’s mom left her as a young girl to mind her siblings for a few days, her brother reported, “You don’t have to hurry back, Ma. Charlotte cooks just fine.’’ Tour buses and Al Roker of the “Today Show’’ have crossed the Ravenel Bridge for Jenkins’s Jollof rice, okra perloo, and other African-inspired dishes at Gullah Cuisine. Though she trained at Johnson & Wales University, Jenkins’s rice cooking technique is strictly old school: “Dip your index finger in the pot, and if the water from rice to surface equals your first index joint, you’re good.’’

If the rice trail were a treasure hunt, a voice would be saying “You’re getting much warmer’’ as you enter Georgetown, where the serious rice growing was done. Occupied by federal troops after the War Between the States, as it’s called here, the gracious town was spared the torch and is full of gorgeous antebellum homes. Front Street, the heart of historic downtown, is a great strolling avenue with cafes backing onto the Sampit River. You might stroll with Nell Morris Cribb (Miss Nell’s Tours) and hear the story from a native and former historical society board member. Or let the online walking tour at www.georgetown-sc.com be your guide. At the town’s center, literally and figuratively, stands the Rice Museum. Here you’ll appreciate the power and pathos of a place that rose and fell on a single crop.

“Mout.’’ It means “mouth.’’ “Teet’’: “teeth.’’ At the Gullah O’oman Museum on Pawleys Island, Vermelle “Bunney’’ Rodrigues translated for me the Creole language called Gullah that Africans from many tribes used to communicate in the barracoons, the barracks in which slaves were confined temporarily. (Gullah also refers to people of West African ancestry in the former rice belt from Jacksonville, N.C., to Jacksonville, Fla.) The little museum created with her husband, Andrew, bursts with West African-inspired culture from music to medicine, while Rodriques’s story quilts dominate the walls. (Her group-made quilt telling the Michelle Robinson Obama story hangs at the White House.) Here you’ll discover the knowledge brought to South Carolina by West Africans, described in old auction advertisements as “Windward coast negroes who are well acquainted with the culture of rice.’’

Georgetown’s countryside is awash in former rice plantations both public and private. For sheer magnitude, Hobcaw Barony is stunning, preserving much of a 1718 royal land grant spanning 14 former rice plantations on some 27 square miles of Waccamaw Neck. The tour by Lee Brockington, its personable and deeply knowledgeable interpreter, weaves the complexities of a Southern Jewish statesman and Wall Street millionaire, Bernard Baruch; his spirited daughter Belle, a towering 6-foot-plus sailor, pilot, and near-Olympian equestrian; Hobcaw’s slaves and their descendants; and critters like endangered red palliated woodpeckers that owe their habitat to Belle Baruch. Like the late Tom Yawkey, who owned the Red Sox and also had a vast estate here, she gifted the land to wildlife conservation and research.

As befits a 1740 Low Country home, the front door of Hopsewee Plantation faces the North Santee River, where Thomas Lynch Jr., at 27 the second youngest signer of the Declaration of Independence, looked across to the family rice paddies on the opposite bank. My afternoon here moved lyrically from warm scones lavished with home-made jellies, to a tour of a house remarkably true to its original footprint and ethos, rescued by owners Raejean and Frank Beattey from a housing development, to a class taught by Margaret Green Weston in the centuries-old West African-American craft of sweetgrass basketry.

The coiled basket makers of Mount Pleasant’s Route 17, of whom Weston is one, today enjoy unprecedented recognition (and prices), helped by artists like Mary Jackson, a MacArthur Prize winner, and a nationally traveling museum exhibit, “Grass Roots - African Origins of an American Art,’’ in which some of them participated. If you’re shopping, consider the fanner basket, the link between transatlantic rice cultures, still used in Africa to separate grain from chaff. In three hours at Hopsewee, students build up the simplest of basket forms. And handles? I asked. “Handles take some learning. Not in a day,’’ Weston said.

In the glow of evening, Frank Beattey breezed us downriver past the slave-tended trunk gates of old. The gates, which allowed the rice paddies to be flooded on the high tide and drained on the low, punctuate the five-river Santee delta, protected by conservation easements for some 60 miles.

Barry Brock, a kayaker who has paddled all over the region, pointed me to Black River Outdoors Center where tours peel off from the Greet Pee Dee and Waccamaw rivers into natural creeks and hand-dug rice canals (blackriveroutdoors.com). Brock is also a former competition pilot who operates the Georgetown County airport. In my last hour in South Carolina, I flew over the delta.

“Rice crops waved over fields of thousands of acres . . . there was not for miles an intervening object to obstruct the sight,’’ American Monthly Magazine wrote of the Low Country landscape in 1836.

It wasn’t so different now. The jewel-green handiwork of centuries past still blankets the land like a Gullah story quilt.

I didn’t make it to Sullivan’s Island, an affluent beach community where slaves from the Middle Passage once disembarked and where author Toni Morrison dedicated a bench. “There is no place you or I can go . . . to summon the presences of, or recollect the absences of slaves,’’ its plaque reads in part.

But on the road from Charleston to Georgetown, I found many such places. They were everywhere I looked.

Correction: Because of a reporting error, a guide in a story on the Charleston, S.C., rice trail in today’s Travel section was misidentified. He is Fred Auld.