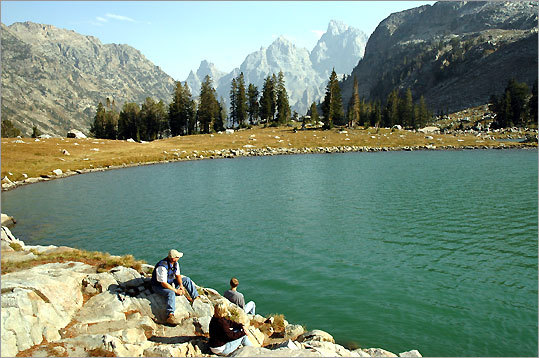 Hikers break near a lake in Cascade Canyon. (Kari Bodnarchuk for The Boston Globe)
By Kari Bodnarchuk Globe Correspondent / May 17, 2009
Text size – +

JACKSON HOLE, Wyo. - Tucked at the base of the imposing snaggletooth peaks of the Teton Range lies a patch of protected land that once served as a Rockefeller family retreat. Here, elk wander through sagebrush meadows, bald eagles fish for cutthroat trout, and marmots sunbathe on rocks alongside peaceful, meandering trails.

Laurance Rockefeller, the late conservationist and philanthropist, donated this land to Grand Teton National Park in 2001 to protect the idyllic setting for future generations. The 1,106-acre Laurance S. Rockefeller Preserve now gives visitors access to new trails, pristine waterways, and seven distinct ecosystems in the southwestern corner of the park.

"It's one of the most wildlife-rich and ecologically rich areas of Grand Teton National Park because of the different types of habitats that mix with each other here," says Jackie Skaggs, public affairs officer for the park, which celebrates its 80th anniversary this year. "It also sits right in the heart of a really important wildlife corridor."

The new preserve has an eco-friendly visitors center with wonderful sensory exhibits and eight miles of walking trails that link to the national park's trail system, making the area more accessible than ever.

The property had been in the Rockefeller family for nearly 80 years, ever since Laurance's father, John D. Rockefeller Jr., purchased 35,000 acres throughout the Jackson Hole Valley in an attempt to protect the region's natural treasures. He donated most of this land to the National Park Service in the 1950s, but held onto 3,000 acres as a summer getaway spot. Over the years, members of the Rockefeller clan have come here to relax, hike, fly-fish, horseback ride, and even honeymoon.

Laurance Rockefeller eventually inherited the land and donated 2,000 acres of it to Grand Teton National Park in the 1990s. Before officially turning over the remaining acres in 2007, Rockefeller (and, after his death in 2004, his estate) oversaw the removal of roads, utility lines, and 30 buildings including family cabins, a boathouse, and structures from its previous life as a dude ranch. His goal was to return the land to its original, natural state.

Today, the only structure on the property is an eco-sensitive visitors center that is made from recycled materials and was constructed so that its roofline mimics the Teton mountains. It is the first building in the National Park Service to have received platinum-level Leadership in Energy and Environmental Design, or LEED, status, meaning it meets very high standards for environmental sustainability.

Carney Architects, the designers, used insulation made from recycled denim in the ceiling and built the preserve's new access road out of asphalt from the seven miles of roads removed from the property. Reclaimed hemlock decking forms the ceilings and Douglas fir from downed trees or recycled from other projects was used to build the walls. The property also has compost toilets, solar power, and, by design, a parking lot that holds a maximum of 50 cars, in line with Rockefeller's belief in the delicate balance between public access and preservation.

"The preserve has a different character and intention than other parts of the park," says Skaggs. "Laurance's vision was to allow people to have a more solitary and personal experience here. You can get away from the noise and din and chaos of civilization and really immerse yourself in the peace and quiet of the forest and the lakeshore experience."

The center sets the tone. After walking past sagebrush meadows and an aspen grove, where bear-claw scratches mark one of the trees, visitors slip into a tranquil setting that transports them into a virtual wilderness.

In a darkened room with slat windows, an audio tape plays the sounds of nature captured from around the preserve: You'll hear the clap of thunderstorms, rain trickling across the lake, the thumping of a grouse, geese honking, insects clicking, and a coyote's haunting calls. In another display, more than 120 miniature photos taken on the preserve are pieced together to form a large-scale image of Phelps Lake and the mountains that rise above it.

The exhibit also includes recordings of Laurance Rockefeller as he talks about the importance of preserving areas of natural beauty, and an eloquent poem written by nature writer Terry Tempest Williams, a part-time Jackson Hole resident and a supporter of Rockefeller's conservation efforts. The lines of the poem, called "A Meditation on Phelps Lake" and written specifically for the center, gently flow through this contemplative space, connecting images, ideas, and sensory experiences like well-placed stepping stones.

"I wanted the words to be an invocation, an evocation of the stillness one finds at Phelps Lake," Williams said recently. "I wanted visitors to feel the words as one feels silence. So often in visitors centers, we are given facts and figures, an overload of information and one leaves overwhelmed and underinspired."

In one of the most powerful stanzas, which greets visitors as they enter, Williams draws on images found in Rockefeller's writings and from her own meditative experiences on the preserve: "The Scales of Nature will always seek equilibrium. A feather can tip the balance."

Although the center is open from May through October, the preserve's eight miles of hiking trails are accessible year-round. An easy 2.9-mile, family-friendly loop from the center to Phelps Lake and back takes you through six of the park's ecosystems, including lakeshore, wetlands, and conifer forest.

From the center, wander along the Lake Creek Trail past a waterfall and over a wooden bridge. Then follow the dirt-packed trail through forests of lodgepole pine and Douglas fir, alongside a trickling creek, and across an open field that once served as the ranch's corral. Keep an eye out for deer and elk tracks underfoot and peek-a-boo views of 10,552-foot Albright Peak up ahead. Birders might spot sandhill cranes, western tanagers, and Clark's nutcrackers along the route.

The highlight of this hike is undoubtedly Phelps Lake, which is so clear you can count the rocks beneath the water's surface for as far as your eyes can focus. The lake sits at the base of the towering mountains and the mouth of Death Canyon. Sit on a bench or boulder beside the lake and take in the majestic views, or make a detour and hike around the lake to sandy beaches on the opposite shore. Watch for pelicans skimming the water's surface and ospreys fishing for trout.

Your return route along the Woodland Trail takes you through a tangy forest and across several grassy meadows where young pine trees soak up the sun. You might smell the mustiness of a deer or hear the high-pitched cries of an elk. Benches beckon you to pause and appreciate the peacefulness of the setting.

While you absorb the sights, sounds, and smells of nature, consider what Williams said of Rockefeller's contribution: "To have the land returned back to itself is not only an act of generosity, but an act of restoration, for the land and for our souls."

The Alpine House
285 North Glenwood St.
Jackson
800-753-1421
www.alpinehouse.com
This country inn, located within walking distance of town, has a crisp and cozy decor with Scandinavian flair. It offers 22 rooms with individual fireplaces, a great reading room, and a casual and welcoming dining room/lounge. Rates: $125-$260.
Teton Mountain Lodge & Spa
3385 West Village Drive
Teton Village
800-631-6271, 307-734-7111
At the base of Jackson Hole Ski Resort (site of the summer-run Bridger Gondola), this classy hotel has a new spa and rustic but contemporary Western-style decor. Rates $279-$299.