What women want from mountain biking 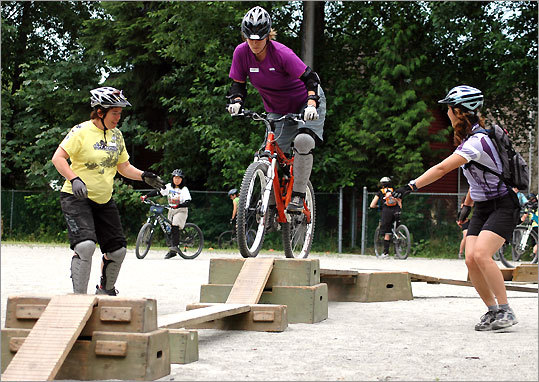 BELLINGHAM, Wash. - Riding down a spongy, pine needle-covered trail in the North Cascade foothills, one thing was clear: I did not want to hit a tree. Some of the hefty hardwoods measured as wide as doorways and had withstood years of battering, coastal storms and, more recently, mild assaults from clumsy mountain bikers.

My fellow biker babes and I were feeling confident, however, after three hours of skills sessions during which we learned how to leap over logs, pedal up steep hills, and do wheelie drops (a technique for clearing obstacles or descending steep ledges). Even more important, we had mastered controlled braking, the skill that would help ensure a safe, Band-Aid-free descent of Galbraith Mountain in northwest Washington.

Thirty-four of us had signed up for the Dirt Series program, a women's weekend mountain bike camp in Bellingham. This roving instruction program holds camps throughout the Northwest, from its home base in , British Columbia, down to Santa Cruz, Calif., and as far east as Park City, Utah.

More than 5,000 participants have come through the program since it launched in 2001. The first season attracted 45 riders. Now, the typically sold-out camps draw 45 to 60 people each, and there are 17 programs on the books for this year.

Women's mountain bike programs continue to grow. The Boston LUNA Chix Cycling Team formed four years ago and offers dozens of events annually, from skills clinics to recreational rides, to encourage more women to get involved in the sport. Dirt Divas in northern Vermont runs one-week camps for girls 11 to 16 and plans to increase the number of one-day programs available to women. And Colorado offers weekend to weeklong programs in Winter Park, Snowmass, Boulder, and Breckenridge, and near Vail and Grand Junction.

The structure of the clinics remains similar, regardless of their length. Most offer skills sessions, nutrition and fitness talks, bike tech information such as how to change a flat tire or adjust your derailleur, and trail rides where you can put your new skills to the test. Some, like Jen Fisher's Over the Bars program in Snowmass, include a massage, a half-day rafting trip, yoga instruction, and a seminar in sports psychology. All emphasize experiential learning and focus on the basics, from how to sit on a bike to how to brake, shift, corner, climb, and descend, among other skills.

Many women start off mountain biking the wrong way: They buy or borrow a bike, hit the trails with little experience, and then often get hurt or left behind by their fellow riders -often well-intentioned boyfriends or husbands whose instructions might be, "Just do it!" The popularity of women's mountain bike camps has grown, in part, because women and men have vastly different learning styles.

"Anyone who tells you that women don't want to know how everything works hasn't been to a women's mountain bike camp," says Courtney Nash, an academic neuroscientist and an instructor for the Dirt Series program. "Women want to pick each skill apart and understand all the bits and pieces, whereas men are like, 'Oh, let's just try it.' "

Adds Dirt Series founder Candace Shadley, "Women typically want to know all the how, why, and whats: How do I make it work, what will happen if it doesn't work, why didn't it work, and can I do it and at what speed?"

For that reason, virtually all women's mountain bike programs use a step-by-step progressive approach to learning. During our Bellingham camp, my intermediate group first learned how to properly brake, getting a feel for how to apply the right amount of pressure on the front and back brakes so we didn't skid, fishtail, or pitch over the handlebars while descending a hill near our practice field. Pretty soon we could glide down in a slow, controlled way without redistributing dirt along the hillside or popping up our back tires.

Every 50 minutes we switched to another skill session, learning how to do front wheel lifts to get up curbs or ledges, bunny hops to get over logs, and manuals for clearing obstacles on downhill runs.

For the learning process, it didn't hurt that many of us were using women's-specific, full-suspension Rocky Mountain bikes that came with top-notch components and were worth $2,500 to $4,000 each. The camp provides bikes, mountain bike pedals, and body armor - shin, knee, and elbow pads - to participants to try for free. Even if we never tested the durability of the body armor, it would provide extra confidence as we tackled often-challenging drills.

After a catered lunch, we put our new skills to the test on Galbraith Mountain, the area's Mount Wachusett. We practiced our climbs and descents while winding through open fields of tall grass and through densely forested terrain where mushrooms and moss cling to the trees, and rocks and roots dot the trails. Nash, our instructor for the ride, occasionally stopped to give us tips or coach us one-on-one as we tackled tricky sections. All the while, we cheered each other on.

"With an all-women's camp, there's a lot of encouragement and a healthy level of competition," said Nash. "Not competition in a traditional way, as in 'Oh, I can do that better than she can,' but in the sense [that], 'If she can do that, I can do that.' "

At a local bicycle shop that night, we attended sessions on bike maintenance, gears, brakes, and cleaning, and were properly fitted to our own bikes. We also learned more about our instructors. Some were passionate amateur riders, whereas others had been professional racers, like Lisa Sher, who was the 2002 US National Downhill Champion and Emily Johnston, a four-time competitor on the National Off-Road Bicycle Association circuit who could do a backflip on her bike.

Day two followed the same structure as the first, but we progressed to more challenging skills. We learned how to make tight turns, do high-speed cornering, and ride in a straight line, first along a fire hose, then on top of a 10-inch-wide plank on the ground, and eventually along raised boards and ramps. The most daunting drill of all, riding over teeter-totters or seesaws, turned out to be much easier than most of us expected. Soon we were each shooting across them like big kids in a playground.

"This is so much fun," said Lori Hiebert of Calgary, Alberta. "I never would have done this last week."

On that afternoon's trail ride, we climbed to the top of a fire road on Galbraith and then descended along the moderately sloped Whoopsie Woodle trail, snaking through the woods in single file.

I was concentrating hard on not getting too close to the rider in front of me when we burst out into the open with magnificent views of Bellingham Bay and the San Juan Islands in the distance, the forested hills around us, and the steep and dramatic slope that was just inches to my left.

Startled by the views and the scary drop-off, I clutched the brakes hard as we crossed a big rock slab and felt my back wheel pitch upward. I did a perfect, mid-air somersault on my bike and landed on a steep grassy slope off the trail, completely unscathed and buckled over laughing.

"They work!" I said, pointing to my scraped but intact leg guards.

We all made it down the mountain without another mishap, nailing drops, banking around tight corners, and even zipping across elevated wooden bridges and down steep, narrow ramps. After two days everything finally clicked.