The other Jefferson monument

Monticello is the legacy of a time and a mind unmatched 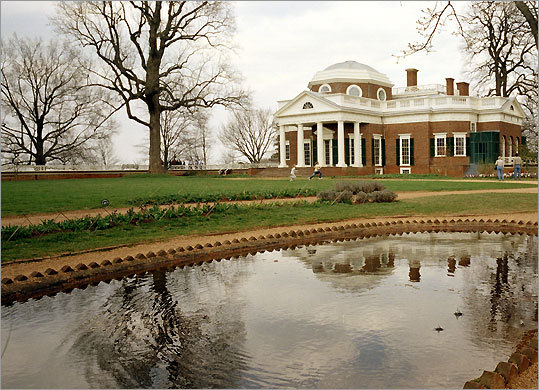 CHARLOTTESVILLE, Va. - Two hundred and twenty-three years ago, Thomas Jefferson wrote a passionate letter to a woman he had met in Paris. Come to Monticello to paint the finest landscape, Jefferson implored the artist Maria Cosway, writing, "Where has nature spread so rich a mantle under the eye?"

To Jefferson, the little mountain above the village of Charlottesville had no equal. The soil was richer, the climate healthier, the vistas grander. Here, he was building a villa unlike any in America, constantly "putting up and pulling down" to create an ever grander vision, culminating in the domed Palladian masterpiece. Cosway never visited, but last year, nearly half a million people from across the globe came to Monticello, the only American house on the United Nations list of World Heritage sites.

But many visitors came here with little formal introduction other than their school lessons. A visitors center was located off the mountain, attached to a tourist office on a busy highway. Eight in 10 visitors drove by the old center without stopping, preferring to ascend the scenic winding road and head straight for Jefferson's house. They took a tour of the mansion, perhaps stayed to survey the gardens and hear a talk about slavery, and then departed. While they saw one of the most important and breathtaking sights in the country - the magnificently restored home and grounds, the remark ably preserved views - the context about the man could be lacking. Much more needed to be told about the ideas and life of one of the most revolutionary, confounding, and indispensable men in history.

This week, however, the Monticello experience is to be born anew with the opening of a years-in-the-making visitors center and museum-like education hall. It is the most Jeffersonian of ideas, a 21st-century construct of the man's endless quest to refine and reimagine Monticello. The center can no longer be completely bypassed. Admission tickets are sold at the site, which includes a theater, exhibits, cafe, gift and book store, classrooms, and children's center.

"Simply visiting the house wasn't a broad enough experience. We wanted to engage and connect people with Jefferson's ideas," said Susan R. Stein, Monticello's senior curator. The center is the latest part of Monticello's effort to expand its educational and scholarly reach, following the opening seven years ago of the Jefferson Library at the nearby International Center for Jefferson Studies.

A visit begins with a new 15-minute film, which opens with a panoramic look of the Blue Ridge Mountains before narrowing its focus to Jefferson's vision of liberty. The film does not shy away from the controversies that seem as vivid as ever about Jefferson, citing the "glaring contradiction" of the man who wrote that "all men are created equal" yet owned slaves throughout his adult life. Moreover, it says that many historians (including those at Monticello) believe that years after the death of his wife, Jefferson "was the father of the children of the slave Sally Hemings."

The complex is a place of many doors through which one can enter the mind and world of Jefferson: the architect, farmer, slaveholder, father, scientist, philosopher, inventor, governor, secretary of state, and president, as well as what he considered his three greatest accomplishments: author of the Declaration of Independence and the Virginia statute for religious freedom, and founder of the University of Virginia.

The three-level, 42,000-square-foot center, designed with a mixture of brick, fieldstone, and cedar, is set unobtrusively on a forested slope, out of view of Monticello. One of its most illuminating exhibits is "An Essay in Architecture," which tells how the house evolved from Jefferson's original vision of Monticello I, a classical eight-room building with a double layer of porticos, into today's familiar 21-room domed structure, which is Monticello II. A computerized video provides a portal into Jefferson's mind as he reimagines the first house and superimposes the architectural influences he picked up while serving as an envoy in Paris. Bricks come down and go up, walls are installed, the dome's superstructure is conceived and the house capped with its signature flourish. Elsewhere in the exhibit, one sees a copy of the small memorandum book, with Jefferson's writing so tiny that it can only be read with a magnifying glass, in which he detailed his building plans.

Across the hall, a room filled with touch screens prompts visitors with a series of questions such as "Why wasn't slavery mentioned in the Declaration?" The answer is that a clause regarding slavery was struck to placate delegates who wanted the slave trade to continue. One who wonders why Jefferson was chosen to write the Declaration learns that John Adams declared Jefferson "can write 10 times better" than others.

Upstairs, in the main exhibit hall, a visitor can examine a detailed lineage of the Hemings slave family, including Sally, whose role in Jefferson's life has received new attention as a result of this year's National Book Award-winning volume by Annette Gordon-Reed, "The Hemingses of Monticello: An American Family." Sally Hemings was the half-sister of Jefferson's wife, Martha, who died 10 years after they married.

Jefferson himself is put in a more personal context. There is a display of items that he regularly carried with him, including a pocket knife containing a corkscrew and tiny saw, and what appears to be a fancy box clock but is actually an odometer that was attached to the wheel of one of Jefferson's carriages and chimed every 10 miles. As any visitor to the house knows, Jefferson was one of the great gadgeteers of his age, constructing doors that closed automatically and designing a great clock that worked on an elaborate system of ropes and weights. But these smaller gadgets had until now been largely out of view.

One of the more amusing displays is an animation that portrays Jefferson as a sort of founding geek, forever counting and measuring things. The video, "A Passion for Ordered Knowledge," also shows Jefferson weighing various animals, a routine that had a serious purpose: He wanted to rebut Europeans who believed that animals in America were smaller and weaker than those on the Continent. (To prove his point to one hard-headed French naturalist, Jefferson asked New Hampshire's governor to send a moose skeleton and skin to Paris.)

A final exhibit, directed at children but also appealing to adults, allows visitors to lie in a replica of Jefferson's alcove bed, sit in his rotating chair, and practice writing with a double-penned polygraph, similar to the one with which Jefferson wrote some of his 19,000 letters. Then it is off to the house itself, on a bucolic half-mile walk or the shuttle bus. Either way, the approach reveals a remarkable prospect, the home on a hill that overlooks what Jefferson called his "sea view," a forest stretching east for miles toward Richmond.

In urging his friend Cosway to visit his mountain, Jefferson wrote, "With what majesty do we there ride above the storms!" He was referring to the dramatic weather that rolled off the nearby Blue Ridge Mountains, but he might as well have been referring to the storm that he helped set in motion in 1776, and the revolutionary ideas behind it. Those ideas, too, now have their own home at Monticello.

Michael Kranish is a member of the Globe's Washington bureau and a former fellow at the International Center for Jefferson Studies. He is the author of "Flight From Monticello: Thomas Jefferson at War," to be published next February by Oxford University Press. He can be reached at kranish@globe.com.

Monticello
931 Thomas Jefferson Parkway
Charlottesville, Va.
434-984-9822
www.monticello.org
Daily except Christmas. Admission prices vary. Tours of the house are by timed ticket. Other tours available include the plantation, gardens, and nearby Montalto.
Ash Lawn-Highland
1000 James Monroe Parkway
434-293-8000
www.ashlawnhighland.org
Home of President Monroe.
Charlottesville downtown mall
www.downtowncharlottesville.net
The city has a popular outdoor mall, on streets closed to traffic, featuring more than 120 shops and 30 restaurants, many of which offer outdoor seating in good weather.
University of Virginia
www.virginia.edu
The campus is spread out along University Avenue, west of downtown. Jefferson's Academical Village, including the famous rotunda, can be seen from Monticello.