At the top of the plains, the spirit is willing to harvest this bountiful element for energy and income 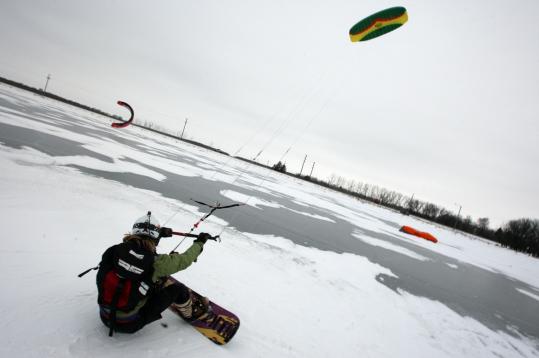 One of a new breed of plainsmen, a snow kiter relishes the wind sweeping him across Devils Lake in North Dakota.
By Tom Haines Globe Staff / February 22, 2009
Text size – +

BELCOURT, N.D. - The wind out here at the northern edge of North Dakota is the stuff of curses and dreams, enough to have driven settlers stir crazy and to have sent modern men snow kiting across the state to promote the potential of wind energy.

Since long before all of that, though, Native Americans have revered this gusty element of the natural world. So in the ice-black fright of a winter night, Jessie Cree, a leader of the Turtle Mountain Band of Chippewa, takes shelter in a simple community center on the reservation and ponders the power of wind.

"It has a spirituality," Cree says, his voice somehow holding the softness of summer. "You can't see the wind blow, but you can see whatever it hits."

Outdoors, strong gusts push the temperature to minus-30 degrees. Indoors, fluorescent bulbs glow over Cree and a circle of men and women preparing to pray for endurance during the harshest season. As hands strike drums in the center of the circle, Matthew Orcutt, 28, bellows the first words of a long-sung song of survival.

In this land long since tilled for cash crops - whether amber waves of grain, oh-so-yellow canola, or high-stalked sunflowers - many now hope the unseen wind will bring salvation to all of us, or at least to those who live on the plains.

As the wider world awakens to the need for alternative energy, hundreds of wind turbines have taken root in fertile soil from one end of North Dakota to the other. Wind farms with hundreds more towers are in the works, a boom of development that boosters say could turn the heartland into a breezy breadbasket: Distant corporations and local families stand to profit, and people from coast to coast could benefit from a more diversified energy industry that puts wind to work.

It may seem a chilling prospect, to come and measure this force of wind in winter, when a biting breeze can freeze cheeks in minutes, or even kill in little more time than that. Yet bundle well, because venturing outdoors brings an encounter with the stark winter beauty of the plains: sky softer in its blanket of blue, snow sparkling and sharp, the expanse of space at once intimate and intense. And such extremes of the season encourage people to huddle in heat, whether in farmhouse kitchens, Main Street bakeries, or cabs of trucks hauling wheat to market.

Climb in, then, alongside Thomas Schill, a farmer near the northeastern town of Langdon, as the wind makes the truck windows tremble. Schill has just dropped hard red spring wheat at the Milton elevator, and is only a few miles from home.

Schill's family has been working like this for generations. But in recent decades, small farms failed and those that survive have grown into ever-larger enterprises, with farmers such as Schill leasing a patchwork of fields. Schill's grown children farm nearby, but many young people in Langdon, and across the plains, have sought their future in the city.

Schill stares from behind the wheel out toward the horizon of white wind turbines.

"Anything to bring some people back to the area," he says. "Up in this part of the country, other than farming, what is there?"

Farmers on the plains have tinkered with wind for decades, building solitary towers to power water wells or grind grain. In 1997, nuns in the town of Richardton began using an electric turbine to partially power the Sacred Heart Monastery. And in 2003, community groups near Edgeley teamed with utilities to organize what became the state's first commercial wind farm.

Such commercial operations have existed on California hills and along European coasts for years, and now investors see the plains as a rich frontier. Longtime oil man T. Boone Pickens has promoted one particularly large project in Texas, but wind energy specialists say North Dakota has more potential to harness wind than any state.

The Langdon Wind Energy Center, with more than 100 towers standing more than 250 feet high, took root when Hans Reinhardt, another local farmer, suggested that county leaders install a wind-measuring monitor. The tests confirmed the obvious: The wind nearly always blows steady and sometimes more than that. During the Father's Day windstorm of 2005, for example, gusts topped 120 miles per hour.

When & Light, one of the nation's largest wind farm developers with projects in more than a dozen states, partnered with other utilities to add to its regional operations in North Dakota, locals in Langdon could prove theirs was a particularly windblown place. Wind tower construction brought temporary jobs, an increased tax base for Cavalier County, and roughly $4,000-a-year payments per tower to landowners.

Neither Reinhardt nor Schill has towers on his land, but Schill's wife, Janet, a photographer as well as a farmer, documented construction of nearby turbines for a self-published book. She called it "The Winds of Change" and wrote: "Now here we are, changing the landscape once again. . . . Huge blades turn over and over using the wind's power to generate the electricity to send down the transmission lines to farms, towns and cities."

The blades, set high above the ground where wind is swifter and smoother, power a generator inside the turbine that creates an electric current. The problem is there are not enough high-power lines to carry electricity to urban markets. Plans to build transmission super-corridors from the center of the nation toward the coasts so far remain only ideas. Without robust lines, critics say, the wind development could quickly die down.

Thomas Schill hopes not. But as he keeps his wheat truck rolling along the two-lane county road toward home, he wonders, "Will they still be running, say, in 20 or 30 years? Or are they going to just be a bunch of dinosaurs out there, not doing anything?"

The big-sky prairie is an easy place to ponder such turns of time. Consider, for example, one small stretch of highway 150 miles southwest of Langdon, and just north of Bismarck, the capital. There, near the town of Washburn and along the banks of the frozen Missouri River, sits the site of Fort Mandan, the winter home in 1804 of Lewis and Clark. A few miles farther north, a Great River Energy Company coal power plant and its sturdy smokestacks fuel modern life. The smokestacks unleash a steady plume, yet on this winter afternoon the wind quickly sends it sideways across the horizon. Just beyond, on a ridge toward the town of Center, stand dozens of wind turbines. Get up close and a single turbine takes on a kind of cosmic grace, its three giant blades gently purring like a comfortable cat. Coal smoke lingers in the distant sky, and it seems an urgent question: Is wind energy the future?

A group of young snow kiters think so, and the past two winters they surfed wheat-stubble fields and ice-topped rivers from north to south across North Dakota in an expedition called "To Cross the Moon." As Jason Magness, Sam Salwei, and Paul Cassedy rode the wind, an educational team presented wind energy and snow kiting lessons to schools and community groups. One goal was to encourage communities to organize their own wind farm interests.

"This last year was more about ownership," Salwei says. "We don't want big companies to come in and funnel the money out."

Such sovereignty is a dream of the Chippewa in the Turtle Mountains, along the border with Canada. The reservation sits among soft ridges carved during the ice age that slope to the edge of the plains. Thirty years ago, the tribe built a single tower on a low hill near a two-lane highway, but the tower soon broke. Another tower rose, and broke.

In the mid-1990s, the tribe bought a third tower, but that also broke months ago.

Several miles away, there is one working turbine, a modern machine looming behind the Turtle Mountain Community College. The tower and the state-of-the-art school stand as stark contrast to much on the reservation, one of the smallest and most densely populated in the United States. More than half of its residents are unemployed and many live in poverty.

Trottier sits in the warmth of a community college room and thinks of the recent multi-million-dollar schools built on the reservation with federal money and of the deal more than a century ago that paid the tribe pennies for each of millions of acres claimed by the government.

"To me, they've made so much money off our land, they couldn't pay this tribe back in 100 lifetimes," Trottier says.

He hustles across the college parking lot, cranks the heat against a minus-10-degree day and drives along a gravel road toward open farmland. After a few miles, he points to a low ridge, where a single tower collects wind data. A German company has approached the Chippewa about building a wind farm. The tribe has owned a metal manufacturing plant for 30 years. Trottier, who dreams of a tribe-owned utility partly powered by wind, wants to wait until the tribe can own the farm, too.

He talks about the sweet smells of the summer winds, and about the global consumption of fossil fuels, about the need to create economic opportunity for individuals on the reservation, but also to save the earth.

"We're going to have to get together as a planet," Trottier says.

As the sun sinks, it does not take the monitoring tower on the ridge to know that the unseen wind blows true. Though the question remains: What will the tribe, and all of us, do with it?

Summer, when wind carries the scent of growing grain, is the sweetest season in North Dakota. Winter, though, comes with its own rewards, particularly in bracing against the elements outdoors or in finding shelter in Main Street bakeries and bars.