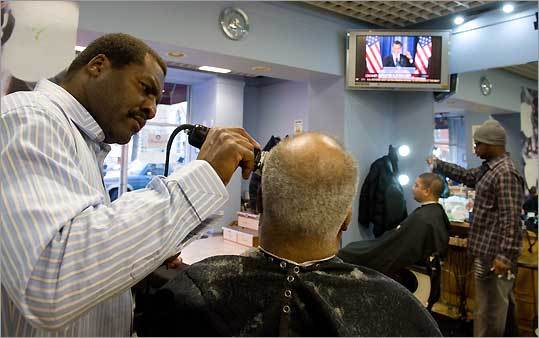 (Saul Loeb/AFP/Getty Images) The Obama is the most popular cut at Hyde Park Hair Salon, which is owned by a stylist known as Zariff (left).
By Edward McClelland Globe Correspondent / January 4, 2009
Text size – +

CHICAGO - Guy and Chris Realf from Norwich, England, come to Chicago every year to visit their daughter. They have been to the top of the Sears Tower. They have seen the dinosaur at the Field Museum. They have chewed through deep dish pizza.

This time, they wanted to see the storefront barbershop where Barack Obama used to get his hair cut. The Realfs were waiting to take a city-guided trip through Hyde Park, the president-elect's neighborhood. It's become so popular that the Chicago Office of Tourism has doubled the number of Hyde Park greeters, or guides.

"We wanted to go partly because of Obama, because we heard his hairdresser was there," Guy Realf told greeter Marlene Stern. "We read about it in the Daily Telegraph."

Stern has been giving architectural tours of Hyde Park for years, but these days, she is adjusting her itinerary to allow for Obama gawking. First, she showed the Realfs the wedding-cake brick mansion of meatpacker Gustavus Swift. They admired it politely, then asked, "Where does Obama live?"

Obama lives at the corner of Greenwood Avenue and 51st Street. It's impossible to approach the house, because the Chicago police have sealed off the block with metal crowd-control barriers. But the white portico is visible from 52d Street.

"We're seeing history, Chris," Guy whispered. "Fantastic. It was worth the trip just for this."

The trip headed next to the University of Chicago, where Obama taught constitutional law. But there was a short detour so Guy could snap a picture of the Hyde Park Hair Salon, Obama's barbershop. He seemed as delighted as a traveler spotting Big Ben.

The Realfs ended their walk through Hyde Park at the Laird Bell Law Quadrangle, an Oxbridge Gothic compound just south of the Midway Plaisance, a mile-long linear park. They had gotten the nickel tour, and they had gotten it for free from the city, which even provided an all-day bus pass. But there's a lot more to see of Obama's Chicago.

You can follow the Presidential Chicago tour at www.choosechicago.com, or you can sign up with one of the private tour companies that have recently added Obama tours. My Kind of Town and Tours-R-Us Chicago will both drive you through the Land of Obama for a fee.

Keep walking through Hyde Park, a multicultural academic village eight miles south of the Loop, and you'll find that the residents are thrilled that their neighborhood has finally become a bigger attraction than Wrigley Field or Millennium Park.

Take 57th Street Books. It's an independent, cooperative bookstore that has claimed Obama as a customer since 1986. In honor of his election, there's a display of Obama books inside the door.

Store manager Jack Cella has received phone calls from out-of-towners who want to buy Obama's "Dreams From My Father" (his 1995 autobiography) from 57th Street, just so they can have a receipt from Obama's favorite bookstore.

Cella won't say what Obama reads, but be assured it's high-minded. Book dealer to University of Chicago professors and grad students, 57th Street is an underground warren of literature, more likely to sell a book of short stories than a best-selling thriller.

"They both read very widely," Cella said of Obama and his wife, Michelle. "They look at a wide range of titles. It's great that we'll have a reading family in the White House."

A few doors down is Medici, a campus hangout where the Obamas have been dining since they owned a condo a few blocks away. You know it's a college place because the booths are scribbled with graffiti like "It's always 4:20 in Wonderland." Medici's waiters wear T-shirts boasting "OBAMA EATS HERE." And they'll tell you exactly what he eats, so you can eat it, too.

"They like cheeseburgers and pizza," manager Sarah Perleschi said. "They really like the garbage pizza. It has all the meats and a lot of vegetables. He eats a lot. You wouldn't think so, because he's so skinny."

The garbage pizza, which contains smoked ham, pepperoni, mushrooms, ground beef, sausage, onions, and peppers, is such a mess of toppings it has to be eaten with two hands. You can even order it where Obama eats. That would be the corner booth, where he has plotted with campaign strategist David Axelrod.

Keep going north and you'll come back to the Hyde Park Hair Salon. It's a classic South Side barbershop, with a shoeshine stand, copies of Jet on the waiting table, and now, a painting of Obama.

Since this is Hyde Park, even a guy like Guy Realf can get his hair cut here. Half of the customers are white or "straight-type hair," said the owner, an imposing hairstylist who goes by the name Zariff.

Zariff began cutting Obama's hair 15 years ago. For most of that time, Obama wore his hair in a fluffy, semi-Afro. But in 2004, when his client had a gig on national TV, Zariff gave him a more serious haircut.

"I decided to change it for the DNC speech in 2004," Zariff said, referring to the keynote address at the convention in Boston. "He told me to make him look good, so I cut it shorter, the look that you see now."

Now, the Obama is Hyde Park Hair Salon's most popular style. Zariff has given it to customers from all over the world.

"I've got a gentleman from Japan, Mr. Sato," he said. "He does a lot of Obama impersonations."

Once Obama got bigger, his Chicago got bigger than Hyde Park. He used to shoot hoops at Promontory Point (Lake Shore Drive and Hayes Drive), but those outdoor courts are too public for a president.

On Election Day, he played his traditional pick-up game at Attack Athletics, a private gym where the courts rent for $250. Obama showed up with a posse of politicians, the Secret Service, and a CNN cameraman. Obama played point guard, and never had a ball stolen, said Bruce Prince, a trainer at the gym.

"He's all right," Prince said, when asked to assess Obama's game. "He ain't goin' pro anytime, but he played a physical game. He's in good shape. It's fun for a commander-in-chief to play ball. Usually, they just bowl or play golf."

After the election, the Obamas spent their first night out at Spiaggia, a tony Italian restaurant with a view of Oak Street Beach. An $11 personal pizza at Medici was good enough for an Illinois state senator, but at this reservations-only restaurant, the president-elect could have eaten from the $255 white truffle tasting menu or ordered the $43 wood roasted fillet of turbot and pork belly with Umbrian lentils, chanterelle mushroom, sherry vinaigrette, and chervil.

Spiaggia is also more discreet than Obama's South Side hangouts. General manager Jason Goldsmith wouldn't reveal what the Obamas ate, or whether they sat in the main dining room or a private room. And don't try to get it out of him. Goldsmith is asked "every night" by customers who want to dine in the seat of greatness, and he never tells.

Of course, the Magnificent Mile isn't new territory for any Chicagoan. The Obamas had their first date there, starting at the Art Institute of Chicago on South Michigan Avenue and moving on to the Signature Room at the 95th, the restaurant on that floor of the John Hancock Center on North Michigan.

Another of Obama's downtown favorites is Topolobampo, a Mexican restaurant where, on a recent Friday night, there was a two-hour wait for a table.

"This is Obama's fault," one customer grumbled.

It would seem not everyone likes seeing Chicago add to its tourist attractions.

Edward McClelland can be reached at tedsgarage@yahoo .com.