In his hometown, the legend of Jimi Hendrix is newly exhibited, celebrated, mourned 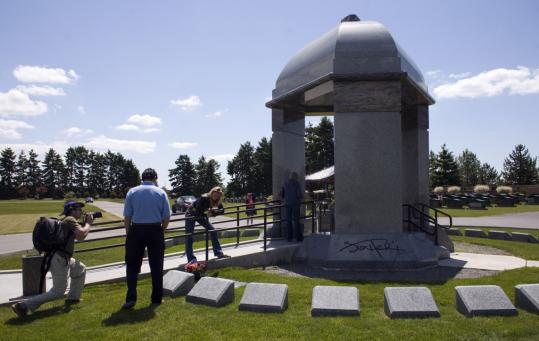 His name still stirs the imagination. Rebellious, unpredictable, beyond boundaries, he slammed rock 'n' roll into new directions. He sang with fierce abandon, lived with a reckless spirt, and blew everyone away at the first Woodstock festival. He became an edgy symbol of the counterculture and achieved otherworldly sounds with his guitar. In 2003 Rolling Stone magazine ranked him first on its list of the 100 greatest guitarists of all time.

And to think it all started in Seattle.

Jimi Hendrix was born in 1942, a child of the Northwest who enjoyed his first brush with fame after he moved to Greenwich Village in the mid-'60s. He later blossomed in London, earning praise from Eric Clapton and members of the Beatles, The Who, and Rolling Stones.

Then came stardom at the Monterey International Pop Festival in 1967, where he shocked and thrilled the California crowd by burning his guitar on stage. Three years later he was dead.

With fans across the globe, Hendrix is winning new love in a hometown that was slow to embrace him. You can get a solid taste of Hendrix here, even though many of his early haunts are gone. The Spanish Castle, a club immortalized in his song "Spanish Castle Magic," is now a strip mall.

"Most artists from their home territories aren't recognized right away, whether it's Beethoven or the Beatles," says cousin Bob Hendrix, who helps run Experience Hen drix, the Seattle company owned by his family that oversees Hendrix's estate. "But we're pleased with the way his image has grown in Seattle, and we're looking to get a street named after him in the future."

The best place to find a Hendrix vibe is at the Experience Music Project, an interactive museum founded by Paul Allen, cofounder of . Called the West Coast's answer to Cleveland's Rock and Roll Hall of Fame and Museum, EMP is an essential stop for music lovers and recently mounted its fifth Hendrix exhibit since opening in 2000.

"Every once in a while, a spirit slips through the portal of time and blows our mind. That was Jimi Hendrix," said Billy Cox, Hendrix's former bassist, who spoke at the opening of EMP's "Jimi Hendrix: An Evolution of Sound," an exhibit that runs until April 2010.

"Hendrix was a real pinnacle. . . . I grew up in Austin, but was so absorbed with him that it took a while to stop trying to copy his music and develop my own sound," said Ian Moore, a Seattle musician who played at the opening party for the exhibit.

The first thing you see is his famed "butterfly" costume, made of an iridescent red, green, and blue fabric that he wore at the Isle of Wight Festival in England and at his last Seattle show in 1970. Nearby are photos of the Spanish Castle - a gritty bar by any standard - and priceless items such as the white Fender Stratocaster he played at Woodstock and shards of guitars he smashed at the Monterey festival and at Royal Albert Hall in London.

Rare artifacts seize your gaze, including Hendrix's diary, his address book (turned to Sly Stone's number), the original artwork for his "Are You Experienced" album, and a photo of Hendrix reading Philip José Farmer's sci-fi novel "Night of Light," with the line "the sky was clear but the stars seemed far away, blobs straining to pierce the purplish haze." It is believed to have inspired Hendrix's big hit "Purple Haze."

The exhibit, however, is not overloaded with memorabilia. "We have 8,000 total items in our Hendrix collection," says Jacob McMurray, EMP's senior curator. "But we're saving bits for the future. We want to have Hendrix exhibits hundreds of years from now that are still exciting."

Among the hottest features are the "mixing stations," where visitors move dials on a soundboard to create their own mixes of four Hendrix songs. Another interactive board explores changing the effects on his guitar, such as his fuzz pedals and Octavio pedal (adding an octave sound). And there's a touch screen that calls up all of Hendrix's lyrics, plus video screens showing eight concerts, and iPods holding 19 of his albums. You can spend all day here.

"For years the city viewed him as a countercultural guy and didn't view him as a hero. It wasn't until the '80s and early '90s that he started to be recognized," said John McDermott of Newton, who works long distance with Hendrix's family as the catalog manager of Experience Hendrix. He said for a long time the biggest sign of respect for Hendrix in Seattle was a mural painted on a pawn shop.

In the '80s, local classic rock station KZOK-FM launched a drive to put a Hendrix plaque on a rock in the city zoo. And a music supply company erected a bronze sculpture of him posed with his back arched, whaling on a guitar. Small but impressive, it's on a sidewalk at the corner of Pine Street and Broadway in the nightclub-rich Capitol Hill district.

Also worth a visit is his gravesite in Renton, a suburb about 11 miles from Seattle. Hendrix died from suffocation, having inhaled vomit due to barbiturate intoxication. His family financed a gravesite and tomb for a reported $500,000. Its large roof and three stone columns look more appropriate for a head of state than a young rocker. It is kept in immaculate condition and has none of the graffiti typically left on rock stars' graves.