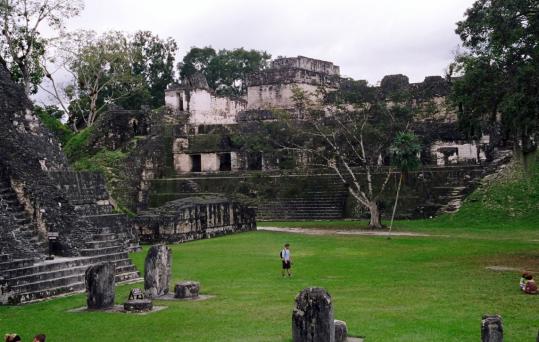 In Guatemala's Tikal National Park, among the Maya ruins is the Central Acropolis in the Great Plaza, the seat of administrative and political power and a vantage point for watching games. (MEG PIER FOR THE BOSTON GLOBE)
Email|Print|Single Page| Text size – + By Meg Pier Globe Correspondent / July 6, 2008

TIKAL NATIONAL PARK, Guatemala - On the road to the Maya ruins we sat in our guide George Hernandez's van, waiting for him to complete the paperwork in the concrete immigration building at the Guatemalan border. As he jumped in and shifted gears, he warned us it would be a long, bumpy ride with no facilities en route, suggesting we stop at the gas station just ahead. My heart raced as I watched my husband, Tom, get the men's room key from a uniformed soldier with a rifle. A few miles down the dirt road, we passed an army barracks and saw armed men in camouflage fatigues looking out over the horizon.

While Guatemala's 36-year civil war ended in 1996, the military is a presence along its border with Belize. We were later told that many Guatemalan Maya relocated to Belize to escape becoming victims of "ethnic cleansing." Hernandez's father, along with many others, emigrated from Guatemala to Belize in the early 1900s, at the end of the Caste War, in which the Maya rebelled against the economic and political domination of those of European descent.

As we bounced along, Hernandez braked at regular intervals to roll over the speed bumps signaling the beginning of small towns, each no more than a handful of colorful houses with palm or tin roofs and a horse munching grass in the yard. Women in brightly patterned clothing walked along the road with big urns on their heads, fat pigs took their time moving out of the path of oncoming cars, men swiped at lush vegetation with machetes, and children in uniforms played basketball and soccer at Roman Catholic schools.

As we neared Tikal National Park, we stopped at a roadside arts and crafts plaza and picked up Armando Bishop, who would be our guide to the monuments. He was eager to show us as much of the park's 222 square miles as possible in the few hours we had. People often spend up to three days taking in the history and wildlife habitat of this UNESCO World Heritage Site.

But we were struck by how few tourists there were. We understood Bishop was frustrated that while the achievements of the Maya were comparable in numerous ways to those of the Egyptians - with breakthroughs in astronomy, mathematics, architecture, and written language - the time, money, and resources of the archeological world have generally focused outside the Americas.

We didn't encounter a single human in our half-hour walk on shady trails from the park entrance to majestic Temple IV, one of Tikal's big attractions. Bishop's familiarity with the calls of indigenous birds, the hiding places of insects, and which species were likely rustling the branches enabled us to spot wildlife we never would have known was there. We saw crocodiles, a family of spider monkeys, keel-billed toucans, a tarantula the size of a man's fist and a hard-shelled horned beetle almost as big, and brown-speckled bats blending into the tree bark from which they hung.

About halfway to Temple IV, we stopped at a "lesser" pyramid complex that was, nonetheless, massive. Despite the steamy heat, I got chills at the sight of our first ruin. Once we reached Temple IV, the spell was broken: Scaffolding enfolded the ruin, crowds milled about its base, and we climbed plank stairs single-file amid exclamations in British, German, and Spanish accents. At more than 20 stories tall, the temple is a highlight of Tikal with good reason. From its heights, the gray peaks of the park's three other highest monuments peeked out of an immense expanse of green stretching to the horizon on all sides.

The Great Plaza, the heart of Tikal, where the sacred rituals and ball games took place, was awe-inspiring. Rising out of the green earth, the Temple of the Giant Jaguar towers on the east, faced by the only slightly smaller Temple of the Masks. On the south side is the sprawling Central Acropolis, opposite the North Acropolis. Tom and I explored each building. Turning a corner on the Central Acropolis, we came face-to-face with a red fox, which seemed as startled as we were and quickly turned tail.

The number nine, a figure sacred to the Maya, recurred throughout our trip. Each building shared a consistent structure: nine levels, each containing nine steep steps, which made for sore legs at the end of the day. Bishop explained that ascension of the stairs was not an everyday occurrence for the Maya but reserved for big ceremonial occasions and probably done by priests on their hands and knees.

Much of the archeology conducted here was done by the University of Pennsylvania. Their style of excavation, adopted by many others in the Americas, focused on preserving just one side of each structure, leaving the others much as they had been found, covered in green vegetation and moss.

Bishop said archeologists attribute the decline of the Maya to overpopulation bringing a depletion of natural resources, resulting in drought, famine, disease, and war.

Later, we realized that interest in the Maya's astronomical prowess may be more widespread than Bishop realized. We were told that hotels across Belize are selling out for Dec. 21, 2012 - the last day of the Maya calendar.

Belize's western Cayo District borders Guatemala and there are several Maya ruins in the general vicinity. The district is a 90-minute drive from Belize City International Airport.

Tikal National Park tikalpark.com This ruin of more than 3,000 buildings was home to an estimated 100,000 Mayans and is located in Guatemala, about 50 miles northwest of its border with western Belize's Cayo District. The drive from the town of San Ignacio in that district is almost entirely on dirt roads and takes about two hours. The Lodge at Chaa Creek offers a full-day guided tour for 1-4 people at $275 per person, which includes transportation, lunch, and visa/entry fees.

Xunantunich Reached by a hand-cranked ferry ride across the Mopan River, this important ceremonial center features "El Castillo," a monument that is among the tallest buildings in Belize, and an exceptional stucco carving of Maya deities. The ferry is located on the Western Highway in the village of San Jose Succotz in the Cayo District. Chaa Creek offers this tour for $100 per person.

Cahal Pech This site is located in the Cayo District on a hill overlooking San Ignacio. Its center is made up of 34 structures, the tallest of which is 77 feet high. Dating to 1200 B.C., it is one of the earliest Maya settlements in the Maya lowlands.

El Pilar Archaeological Reserve for Maya Flora and Fauna Located north of Bullet Tree Falls in the Cayo District, and about 10 miles from San Ignacio, this site affords incredible views of the Belize River Valley. El Pilar is 32 miles from Tikal. Chaa Creek's tour is $135 per person.

The Lodge at Chaa Creek San Ignacio, Cayo District Belize 1-877-709-8708 chaacreek.com A pioneer and leader in eco-tourism, this jungle lodge and spa is set in a private 365-acre rain forest reserve and has 23 palm-thatched cottage rooms, including two treetop suites.