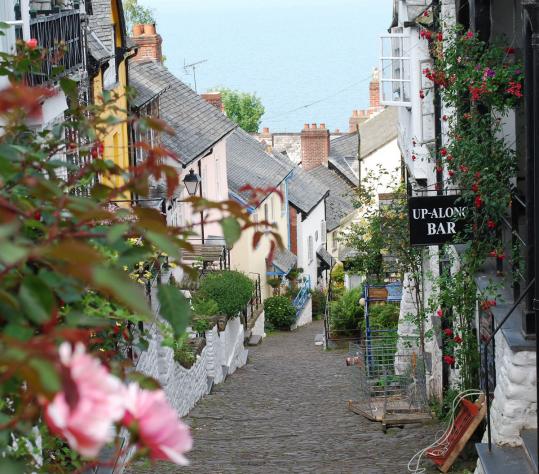 Clovelly’s famous cobbled High Street, known to residents as either the “Down-Along’’ or the “Up-Along,’’ meanders from the village cliff-top to its harbor on the Bristol Channel. (Anne Gordon for The Boston Globe)
By Anne Gordon Globe Correspondent / July 24, 2011

CLOVELLY, England - This village, raised upon rustic wooded slopes once owned by Matilda, consort of William the Conqueror who invaded England in 1066, is mentioned in England’s “Domesday Book,’’ which was completed more than 900 years ago.

Clinging to a cliff face that drops 400 feet in half a mile to the harbor below, Clovelly’s cottages, chapels, craft shops, galleries, Kingsley Museum, and popular New Inn meander downhill along its precipitous, cobbled High Street. Up-Along and Down-Along are what residents call their main thoroughfare.

Because of the street’s gradient, cars are banned. Goods, including visitors’ luggage and everyday items purchased by residents, are lowered Down-Along and dragged Up-Along on custom-made sledges.

For those unable to negotiate the perilous terrain, a Land Rover takes a back route to and from the village. Walkers, though, should be warned. Slip-resistant shoes are a wise investment.

For a peek at hidden treasures when exploring this fishing enclave, one has only to take off along any of its numerous side alleys. Artfully placed wooden benches coax passersby to stop awhile for spectacular views along the North Devon coast. Carved fruits and flowers from the Bavarian Alps add detail to one of the cottages. In a tumble of blossom, trailing fuchsia and petunias nestle in hanging baskets among tall sprays of lavender.

Climb to the upper village for a slow, fragrant ramble through Clovelly Court’s kitchen garden where peaches and apricots in espaliered style ripen against stone walls. Warmed by concentrated sunshine in one of the many glass houses, grapevines spread in a spidery web. Lining paths, dahlias, sweet william, and geraniums crowd in lush splendor. I sit for a moment on a bench in an apple orchard where the manicured grass is speckled with small white daisies, and marvel at the work of Heather Alford, the head gardener.

A visit to the donkey stable is essential. Huddled together in a dim straw-fragrant interior, the clan - 10 English donkeys, one Irish, and two French, with names reflecting their origins: Donk, Sinead, Wellington, Pierre, Jakey Ted, and two cute little fellows named Kiwi and Peter - live in semiretirement.

Before the advent of the sledge, heavy loads were stacked on special pack saddles and carried to the top of the cliff by these stocky little animals. No longer beasts of burden, one of their more pleasurable pursuits today is posing for photographs and standing in the sun on Down-Along, while Sue Kelly, their owner, weaves bright ribbons for their harnesses.

Clovelly may feel like the Mediterranean, with its brilliantly colored mural in the Methodist chapel behind the New Inn. Its cobbled streets with flower bedecked cottages could be in Spain or southern France. The fish-tinted smell of the Bristol Channel as boats rise and fall with the tides is reminiscent of Portugal. But the village, with its wattle and daub cottages - among them Donkey Shoe Cottage, Crazy Kate’s Cottage, Oberammergau Cottage, and Rat’s Castle - is pure Devon.

In days gone by the Red Lion Hotel, one of the few hostelries, was a beer house. Its Snug bar, like all else in the village, has changed little over the centuries. In its upstairs living room, a letter written in the 17th century by King Charles II to Sir John Rous, Lord of Clovelly, is on display.

In the bar, while my husband sips Cobbler, a Devonian ale, I indulge with a cream tea: fresh-baked scones heaped with strawberry jam and Devonshire clotted cream topped with a steaming “cuppa.’’ Keiran Vanstone, the young barman, enlightens me with stories of smugglers. To the east of the village are caves that were used by smugglers bringing in duty-free alcohol from France. Smuggling was rife during the Napoleonic Wars and the locals were not averse to dabbling in piracy and wrecking, a popular undertaking on both the Devon and Cornwall coasts.

Legend tells of cannibals storing salted human flesh in dark caves nearby, but most people believe the macabre tale was circulated by smugglers intent on scaring off intruders.

Christine Hamlyn, who inherited Clovelly in the 1800s, is largely responsible for the village of today. She took it upon herself to restore the neglected village and her restorations are recognized by her initials inscribed on many of the buildings. Today Clovelly is one of England’s most popular tourist destinations.

I was not surprised to learn that this glorious place attracted artists and writers. J.M.W. Turner, Charles Dickens, Rex Whistler, Rudyard Kipling, and Charles Kingsley all have links with Clovelly.

Kingsley, the clergyman, historian, and novelist, spent his childhood here and his novel “Westward Ho!’’ led to the founding of a town by the same name. His delightful children’s classic, “The Water Babies,’’ was inspired by the time he spent in Clovelly. Dickens and Kipling mentioned Clovelly in their books and Whistler’s paintings were used on Wedgwood china. Turner’s painting of Clovelly’s harbor resides in the National Gallery of Ireland.

As in most English villages traditions play an important role. Annually on Shrove Tuesday, a ritual called “Lentsherd’’ is reenacted. Village children drag noise makers - tin cans and anything else that will clatter on the cobbled High Street - on strings to the end of the harbor wall to scare the devil into the sea before the onset of Lent.

The Clovelly Herring Festival in November is a grand event for foodies, with herring, kipper, and bloaters on the menu. Shanty singing by “Shake a Leg’’ from Bideford, “Hanging Johnny’’ from Plymouth, or Exmouth’s “Shantymen’’ set feet a-tapping.

In the run-up to Christmas, villagers gather on the harborfront for an evening of caroling. As winter closes in, the aromas from a hog roast, mince pies, and mulled wine drift on the wind.

The chances of meeting John Rous (a descendant of Christine Hamlyn) on the cobbles leading down to the sea are strong. In the last 800 years Clovelly has changed hands only three times, and the Rous family have been lords of Clovelly for close to 400 years. As it was in the past when the aristocracy ran their estates as private fiefdoms, the residents here are all tenants rather than owners of their properties.

There is something for everyone here. Cliff walks, caves, and secret coves tempt those with a penchant for exploration. Wannabe sailors or adventurers can set off on a small boat for Lundy Island to learn about its smuggling history. For the not so active, sitting on the harbor wall eating Cornish ice cream and watching the world go by is a great way to spend an afternoon.

Anne Gordon can be reached at annegordon@yahoo.com.