Always worth a go

While the Celtic Tiger dozes, the capital awaits with history, lodgings, food, and a free pint 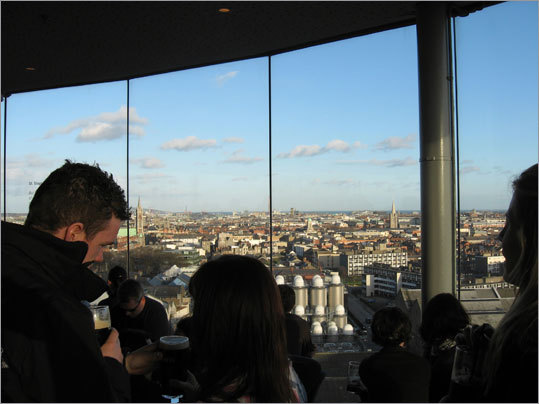 (James R. Carroll for The Boston Globe) It can seem everyone is crammed into the Gravity Bar at the Guinness Storehouse, balancing their free pints and trying to enjoy the view over Dublin.
By James R. Carroll Globe Correspondent / March 13, 2011

DUBLIN -- The running joke in a play that just closed here features various characters reassuring themselves of Ireland’s appeal to the rest of the world.

“Ireland mustn’t be such a bad place,’’ residents of 1930s island life say again and again, if Americans, dentists, Germans, and sharks want to come.

The gag in Martin McDonagh’s “The Cripple of Inishmaan’’ got laughs, and surely in part because it resonated in today’s Ireland, now perceived by the rest of the world as an economic invalid whose halcyon days as the Celtic Tiger are a mere memory.

The tiger may be sleeping, but Ireland and its capital remain enchanting, energetic, and very much worth the trip.

While the Irish may struggle with massive debt, shaky banks, a real estate bust, and joblessness, nowhere is the resilience of this nation better on display than in Dublin, where stores are busy, pubs are full, languages are many, cars are new, and conversation remains the true wealth of the nation.

“We’ll come around,’’ a bartender assures a patron nursing a Smithwick’s.

Dublin is ideal for the independent, on-foot explorer who would never consider the stop-and-go tour bus. Relatively compact and level, Dublin offers the promise of serendipitous encounters with history, food, culture, and shops large and small. And one of the greatest charms of this city, if you like beer, is the nearness of that pint once exertion prompts the thirst.

In the early 1980s, Dublin was a rather drab, sleepy capital. Now, Europeans pop over here for a weekend, joining throngs of Americans who seem to be around every corner. And yet for all of its newly acquired international élan, Dublin retains an earthy and unpretentious quality: Step into the elegant on a cold day and you will find glowing coals in the grates.

And that’s a good place to start a Dublin exploration.

A tightly packed neighborhood near the city’s center, Temple Bar is squeezed between the Liffey River to the north and Dame Street a few blocks south. It combines the vibes of Paris’s Left Bank with the endless musical background of New Orleans’ French Quarter. Pub after flowered pub offers pints, food, and traditional Irish and contemporary music from afternoon onward. Craft shops, bookshops, and galleries provide accompaniment. On weekends, Temple Bar’s streets are filled with fruit, vegetable, and flower merchants, booksellers, artists, and purveyors of homemade foods ranging from fried meats (chicken and beef, but horse, too) to vegetarian curries to Irish cheeses.

Go mobile with Hanley’s Cornish Pasties. The small shop offers the traditional steak and potato pasty, hot and generous, as well as variations on the theme. It is on the way to Merchant’s Arch, a walkway that will take you to expansive views of the city and its many bridges straddling the Liffey.

Ha’penny Bridge, a pedestrians-only span opposite Merchant’s Arch, is one of the most famous bridges. It’s an ideal spot for surveying Dublin’s low skyline, dotted with steeples and the impressive domes on the Four Courts and the Custom House, both dating to the 18th century.

Dublin’s early history must be hunted out, but it is here. Dublinia, west of Temple Bar, is a museum established in the late 1990s devoted to the Celtic, Viking, and Norman heritage of “Dubh Linn,’’ Viking for “black pool.’’

If that sounds dull to the kids, prove them wrong. Exhibitions include a reconstructed Viking house, complete with a man in the outhouse; a reconstructed medieval Dublin street and dock; and highly descriptive accounts of a medieval life of tooth rot, old age at 30, and daily threats of sudden and violent ends. Then there was the Black Death in 1348, which killed a third of Dublin.

Across from Dublinia is Christ Church Cathedral, where a house of worship of some kind has been on the spot for 1,000 years. The cathedral has a Victorian appearance, courtesy of one of its last “restorations,’’ but in its crypt below are artifacts and structures dating to the 11th century, preserved mainly, the sign says “because they weren’t in anybody’s way.’’

Some history is a matter of dispute. Take The Brazen Head, reputed to be Ireland’s oldest pub. A five-minute walk from Christ Church, the pub says on its walls and menu it dates to 1198. The tour books say 1750. The argument is best conducted over a beautiful lamb stew or a heaping plate of steaming mussels and a Guinness in this gem. Its tiny rooms are cozy with the heat of peat fires (the sweet aroma of burning peat is the evening scent of Ireland, including modern Dublin).

Lunch, dinner, or midnight, do pick up the city’s very best fish and chips at Burdock’s near the cathedral. The newsprint-wrapped meal weighs as much as a small pet. Best to share. Or maybe not.

Jump forward in the time machine with a short hike west to the National Museum of Ireland at Collins Barracks, home to British forces for centuries until Ireland’s independence. The huge courtyard has been the scene of many historic meetings and military ceremonies, including President Kennedy’s 1963 Ireland visit.

The National Museum’s barracks quarters are mandatory for those who wish to understand Ireland’s tragic and bloody history, as well as its arts and culture. Particularly noteworthy is the treatment of the Easter Rising of 1916, the abortive revolt that nevertheless set Ireland on the path to independence. Among the artifacts on display is the green “Irish Republic’’ flag that the Irish rebels flew above the General Post Office on O’Connell Street before the building was gutted by British shelling and the revolt was squashed.

History of a different sort awaits at the sprawling complex of tanks and brick buildings just across the Liffey. The large signs say the magic word in Ireland: “Guinness.’’

The Guinness Storehouse is Disneyland for beer and the most popular tourist attraction in Ireland. Six floors of exhibits detail the making of the dark stuff, and the seventh is quite literally the crowning reward: the Gravity Bar, a glass-enclosed observation deck offering a free pint and 360-degree views of Dublin.

Just a 20-minute walk east from Guinness is Dublin Castle, once the seat of British rule in Ireland and still the site of important state functions. Surprisingly, despite a tendency over the centuries for politically disagreeable symbols to end up in street bonfires, the portraits of British viceroys survive. So, too, does the sawed-off throne for the diminutive Queen Victoria, the last British monarch to visit Eire. Below ground, remnants of the ancient castle were unearthed during a restoration and thankfully preserved.

No car? Dublin has a fast break to the country. Take DART, the commuter rail, for a gorgeous one-hour ride south through seaside towns, along rocky cliffs, and through tunnels. At the terminus at Greystones in County Wicklow, you will step into sea air, screaming seagulls, and a charming village with mountains in the distance.

Back in Dublin, through the wooden gate of Trinity College Dublin and in its library is one of Ireland’s greatest treasures, the Book of Kells, a ninth-century illuminated gospel manuscript. A guard who stands close by will tell you the book is always displayed open to a page of illustration and a page of text. Every four months, the pages are turned, a task that takes eight men three hours to accomplish.

Shopping around Trinity means boutiques and department stores such as Brown Thomas and Marks & Spencer on pedestrians-only Grafton Street, a magnet for street musicians day and night. On Nassau Street, the House of Ireland and the Kilkenny Shop carry a wide variety of Irish goods, including clothing, jewelry, pottery, and crystal.

On Dawson Street, gaze upon shelf after shelf of choice Irish whiskeys at The Celtic Whiskey Shop. Often, samples are open for your palate’s approval.

What is Dublin without books? For new ones, hit Hodges Figgis, also on Dawson Street; for used tomes, try Books Upstairs near Trinity’s gate; and for antiquarian books, see Cathach Books on Duke Street.

More shopping awaits the indefatigable along O’Connell Street, dominated by the pillars of the iconic General Post Office and just a few minutes’ walk north of Trinity.

And what to make of The Spire, officially called the Monument of Light? A steel needle almost 400 feet high on the site of Nelson’s Pillar, blown up by the Irish Republican Army in 1966, The Spire is intended to symbolize the new Ireland.

Munching on a hot sugar doughnut from the Rolling Donut across from Daniel O’Connell’s statue, you notice the locals mostly ignoring The Spire.

Said a photo shop clerk who looks out on it all day long: “It’s not much now, is it?’’

James R. Carroll, author of “One of Ourselves: John Fitzgerald Kennedy in Ireland’’ (2003, Images From the Past), can be reached at vernoncarroll@cox.net.

Where to stay
The Shelbourne Dublin
27 St. Stephen’s Green
011-353-1-663-4500
www.marriott.co.uk/hotels/travel/dubbr-the-shelbourne-dublin-a-renaissance-hotel
Dublin’s most famous hotel. Have drinks in the Lord Mayor’s Lounge overlooking the green. Rooms and suites $273-$565.
The Clarence Hotel
6-8 Wellington Quay
011-353-1-407-0800
www.theclarence.ie
A hip hotel owned by U2’s Bono and The Edge, located on the Liffey River in Temple Bar. Rooms and suites $150-$482.
Bewley’s Hotel Ballsbridge
Corner of Merrion and Simmonscourt roads
011-353-1-668-1111
www.bewleyshotels.com/ballsbridge
Located in a former girls’ school in leafy Ballsbridge, a 10-minute double-decker bus ride from the city center. Rooms and suites $81-$138.
Where to eat
O’Neill’s Bar & Restaurant
Suffolk Street
011-353-1-679-3656
www.oneillsbar.com
A dark-paneled warren of rooms, a bar with a huge beer list, and a traditional carvery offering sandwiches and hot dishes from 10:30 a.m. until 10:30 p.m. $13-$18.
Porterhouse Brewing Co.
45-47 Nassau St. and other locations
011-353-1-677-4180
www.porterhousebrewco.com
Part of an Irish-UK chain, but it brews its own terrific beers and has an extensive menu. Lunch and dinner $14-$20.
The Stag’s Head
1 Dame Court
011-353-1-679-3701
www.louisfitzgerald.com
One of Dublin’s oldest traditional pubs, a cozy Victorian mahogany, stained glass, and marble, a place for conversation without television in the background. Lunch and dinner $8-$16.
Café en Seine
40 Dawson St.
011-353-1-677-4567
www.cafeenseine.ie
An atmospheric place on three floors, full of palm trees, huge chandeliers, and statuary. Very lively. Lunch and dinner $11-$19.
What to do
Guinness Storehouse
St. James’s Gate
011-353-1-408-4800
www.guinness-storehouse.com
Orient yourself to the beer and the city simultaneously at the Gravity Bar, seven stories above the streets. Admission about $20, but includes a free pint in the bar.
Dublinia
St. Michael’s Hill, Patrick and High streets
011-353-1-679-4611
www.dublinia.ie
Museum on Viking and medieval Dublin. Next door to historic Christ Church Cathedral. Admission $10, and it can be combined with visit to the cathedral for an additional $5.
The National Museum of Ireland at Collins Barracks
Benburb Street
011-353-1-677-7444
www.museum.ie
Permanent exhibitions on Irish history, art, and culture. Closed Mondays, admission free.
The National Museum of Ireland (Archeology)
Kildare Street
011-353-1-677-7444
www.museum.ie
Ancient artifacts from Ireland and other nations. Closed Mondays, admission free.
The Old Library and Book of Kells
Trinity College Dublin
011-353-1-896-1000
www.bookofkells.ie
A ninth-century illuminated gospel manuscript is one of Ireland’s greatest treasures. Admission about $12.