Dead of winter? Not in Northern Europe 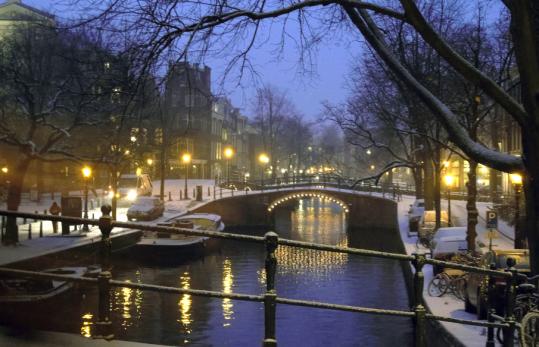 Winter arrived in Amsterdam — and most parts of Europe — last month, dusting Reguliers canal and the rest of the center city with snow. (Peter Dejong/Associated Press)
By Peter Mandel Globe Correspondent / December 12, 2010

AMSTERDAM — Is Northern Europe a destination in snow? The travel industry doesn’t seem to think so. Ski areas aside, most tours and cruises venture to Scandinavia, Germany, and the Netherlands in summer, when the days are stretched and soft.

I had always wondered what went on up here in the quiet of winter. What did locals do for fun? Were there seasonal bargains to be had? And how could I make the most of the least touristy time of year?

So I bought a 10-day Eurail Pass and sketched out an early February train route between Amsterdam, Copenhagen, and Stockholm. Round-trip flights from Boston to Amsterdam were unusually cheap, and when I checked a seating chart online, I found I had acres of aisle and window seats to choose from. So far so good.

Winter in the Netherlands’ capital and biggest city is supposed to deliver rain and sleet. But the day I checked into my Amsterdam hotel, there was a dusting of snow outside. Still, swans paddled around the fog-shrouded canals — white on white.

A resident I talked with, Nicolette Corputty, urged me to rent a bicycle to get around. Hundreds of cyclists were rocketing past on the sidewalk at the time, angrily ringing and ringing their bells.

I didn’t pack any leggings. So I decided to walk instead. I weaved in and out of rows of gabled houses and ended up at the ice skating rink near the Rijksmuseum, where I downed a thick hot chocolate and tried some bits of a puffy pancake called a poffertje to ward off the cold.

The halls of the world-famous museum were all but deserted except for knots of art students sketching. I took my time, imagining that it was my personal gallery and that I had plans to sell off some of the darker Dutch masters’ works and rearrange the paintings on a massive scale. The footsteps of a guard snapped me out of my reverie. By late afternoon, I was back outside.

Everywhere there were pinpoints of brightness that set off the gray of street and snow. A window glinted with its stacks of yellow cheese wheels. Shutters I passed were painted a surprising blue. For a long time, I got lost in side streets. But as flakes of snow floated past I realized I didn’t care. I had a long brick sidewalk and arched iron bridges all to myself — and not even a stray bicycle in view.

On the train to Denmark the next day I was handed a voucher entitling me to free coffee, tea, or water the entire way. My compartment to myself, I spread out, cranked up the heat, and kicked off my shoes.

Nearly as far north as Moscow, Copenhagen depends on ocean winds to mellow out and melt its snow. When a day is icy, like the one on which I arrived, the Danish idea of hygge, or coziness, comes into play. “Hot Tea and Hygge!’’ read a sign in front of a cafe. Inside, candles were lighted, there was a scent of soup, and out came platefuls of smorrebrod, open-faced sandwiches of ham, hard-boiled egg, and salmon — anything that can sit on bread.

After lunch, I visited the Copenhagen Amber Museum on Kongens Nytorv. It was quiet and warm. “Amber is actually fossils,’’ explained Biyun Chen, a museum desk clerk, when I asked about ships and clocks made of the stuff. “Fossils of pine resin from the forests of very long ago.’’

I ended up buying a souvenir piece. When I asked Chen how I could be sure the amber was the real thing, he laughed. “Burn it!’’ he said. “It will smell like pine trees.’’

Before leaving the city, I walked to see the statue of the Little Mermaid, from the Hans Christian Andersen tale, in Copenhagen harbor. She isn’t dressed for February and looked hunched and cold. But the orange and rust-red facades that line the famous port of Nyhavn reflected the secret sun. As if it were an afternoon in August, they radiated and glowed.

Reaching Stockholm meant riding a train another 325 miles north, and the farms and houses that flew past looked as rich as pastries with their frosted tops.

The Stockholm air was sharp in my nostrils but no one there seemed to notice the cold. Commuters wore boots with their suits and children in their Day-Glo snowpants slid around like jelly beans spilled from a jar.

At the top of my sightseeing list was the salvaged wreck of the Vasa, the world’s only preserved 17th-century ship. As I found out, “wreck’’ is the wrong word. This 1628 Swedish warship is immense. And it is almost entirely intact, as if hammered together in the cavernous museum.

Like the times when I had seen a blue whale, or bones of a brontosaurus, I wanted to walk around the display again and again. The museum’s chilly balconies let me peer at the Vasa from every imaginable angle, short of standing on its deck. To try to absorb it, I got a cup of the strongest and hottest coffee the cafeteria offered.

“You look as if you need it,’’ said the woman pouring. I smiled and swallowed slowly.

The dark strength of the drink, and of the ship, did their work. As if fired from a Vasa cannon, I skidded around Stockholm’s Old Town, which was busy with shoppers, and crossed a bridge that led me to a neighborhood called Östermalm. Elegant apartments lighted my way up a slippery hill.

When I got to the top, something caught my eye. It was a golden ornament, a statue of a stork standing guard over its corner store. “Storken Apothecary,’’ said its sign. “Oldest in Sweden.’’

It was a fierce-looking bird. But because of the weather he had a little hat of snow. Something about him said, “Sweden,’’ which to me meant, “We survive.’’

We survive. We thrive.

I smiled, shook some snow off my own hat, and trudged on.

Getting around
Rail Europe
44 South Broadway
White Plains, N.Y.
1-800-622-8600
www.raileurope.com/rail-tick ets-passes/
A Eurail Global FlexiPass gives you 10 days of travel over a broad network of European national train systems within a two-month period. If you buy in advance, you can make seat reservations before your trip and pay in dollars, $893.
What to do
Copenhagen Amber Museum / House of Amber
Kongens Nytorv 2
011-45-33-11-67-00
www.houseofamber.com
Close to the historic port of Nyhavn, the museum and shop are in a 1606 building, one of the city’s oldest. Daily, $4.
Vasa Museum (Vasamuseet)
Galärvarvsvägen 14
Djurgården, Stockholm
011-46-8-519-548-00
www.vasamuseet.se
One of the largest battleships of the era, the Vasa sank in 1628. It was salvaged in 1961 and eventually displayed here in dramatic fashion. Daily; adults $14, ages 18 and under free.
Where to stay
Radisson Blu Hotel
Rusland 17, Amsterdam
011-31-20-623-1231
www.radissonblu.com/hotel-amsterdam
In a canal-crossed downtown neighborhood, the Radisson Blu uses a contemporary overlay to link an 18th-century merchant house and a 19th-century vicarage. Doubles from about $105.
Scandic Hotel Anglais
Humlegårdsgatan 23
Stockholm
011-46-8-517-340-00
www.scandic-hotels.com
Many rooms overlook Humlegarden Park. Doubles from about $170.
Where to eat
Restaurant Parnas
Lille Kongensgade 16
Copenhagen
011-45-33-11-49-10
www.parnas.eu
Old-fashioned Danish fish and meat specialties. Entrees from about $19.
Restaurang Drottninggatan
Drottninggatan 67, Stockholm
011-46-08-22-75-22
www.mat-dryck.se
In a city full of overpriced dining, this casual restaurant and bar is a small-scale refuge. Entrees from about $15.