Tracing a writer’s journey through Greece 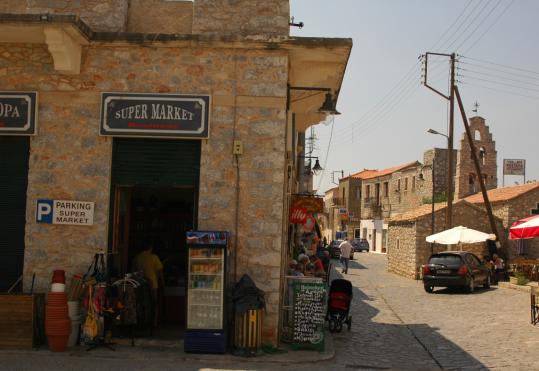 Areopoli (above) is a tiny town in Greece that helped inspire author Patrick Leigh Fermor to write “Mani.’’ Vathia (below), another place he visited, is now a ghost town. (Photos By Heidi Fuller-Love for The Boston Globe)
By Heidi Fuller-love Globe Correspondent / October 17, 2010

KARDAMYLI, Greece — Named for Phrygia’s mythical king, Pelops, who is said to have conquered this savage region before his father had him chopped to pieces and fed to the gods, the Peloponnese region stretches a fat hand out from the bottom of Greece and points bony stone digits toward the Cyclades, Turkey, and Crete. “When God had finished making the world he had a sack of stones left over and he emptied it here,’’ the Maniots are fond of saying.

Passionate philhellene Patrick Leigh Fermor, the Irish adventurer-turned-travel-writer played by Dirk Bogarde in the classic war opus “Ill Met by Moonlight’’ (later called “Night Ambush’’) visited the middle “finger’’ in the 1950s . Impressed, he wrote “Mani,’’ his fascinating account of a journey by foot, mule, and “caïque,’’ or wooden boat, to the heart of this arid peninsula cut off from the world by the Taygetus mountains and dotted with stark stone towers inhabited by fiercely feuding locals.

Hiring a car at Kalamata to follow in his footsteps, I arrive 60 years later, via lush countryside spiked with cypress spears, at Kardamyli, where Fermor settled with his wife, Joan, after his Mani adventure. Fermor, now in his 90s, still lives in the pretty village that was once a major Spartan port.

Giorgos Giannakeas, the son of Lela, Fermor’s former housekeeper, runs a seaside taverna. He tells me that the sprightly writer is often seen striding down the main street lined with driftwood-decorated cafes. “Our village attracts hikers who come to climb the peaks of Taygetus mountain range, but our main visitors are British people who come seeking the great man,’’ he says, doling out a fragrant ladle of Lela’s moussaka .

Half an hour’s drive from Kardamyli, the tiny harbor of Gytheion, once the main seaport of ancient Sparta, bears little trace of its former glory. Worn marble steps climb to a warren of alleys where cats prowl hungrily and storekeepers sell feta cheese from grime-rimmed buckets.

Unable to feed their families, countless Maniots traveled from here to find work in the New World at the turn of the 20th century. “Our fathers had no choice. It was that or die of hunger,’’ says Zafeirakos Zafeiris, who owns a hotel overlooking the Laconian Gulf.

On leaving the port, they would have passed the Kranae peninsula where Paris and Helen shared that epic night of love whose belated climax was the Trojan war. As the sun descends over this weed-blown strip of land, fishermen beat squid like laundry and ink spurts out, staining the rocks.

Gateway to the Mani, Gytheion signals a dramatic change in scenery. Climbing steeply into the fierce sun, my rental car groans and spews clouds of cheap Greek diesel. At a gas station where I stop to fill the tank, pump attendant Adonis Grigorakakis, who, like many Maniots, grew up in the United States, tells me. “The thing you have to understand is it’s all mountains here, see? The only way you could get to one of the villages here was with a boat. And it was like that right up till, say, 20, 30 years ago.’’

I climb higher until the sea looks like shards of a broken mirror and I’m surrounded by scree-strewn slopes spiked with purple-flowered thyme where scrawny sheep, their udders ripe with the raw substance of the pungent local Sfela cheese, jingle fist-sized bells. It is the bleak scenery described so lovingly in Fermor’s book.

Just outside Areopoli — named for Greek war god Ares, I spot my first “pyrgospita.’’ Tall and square, these eyeless towers were once strongholds for a vendetta-loving local aristocracy. “Feuds lasted for centuries and were ended either by the destruction of a whole family in battle, or by the surrender of an entire clan who were then required to kiss the hands of the victors who had lost ‘guns’ (male children) in the battle,’’ a leaflet at the village’s eclectic war museum explains.

When Fermor arrived in Areopoli 60 years ago sporting rucksack, shorts, and a charmer’s grin, he met people who had never seen anyone from outside the Mani before. Nowadays, this atmospheric jumble of towers and tavernas woven together by skeins of bougainvillea attracts a multinational rag-bag of visitors who stop for “meze,’’ or snacks, before visiting the Diros grotto, a subterranean wonder world of salmon stalagmites sheltered in a booming sea cave beneath the village.

Vathia, farther along the coast, has changed too. The lively village where Fermor was teased by a shepherd girl is a ghost town where one or two renovated pyrgospita glitter, amid a brooding huddle of ruined towers. I peek into one of them. Cramped as a windmill, dank as a cave, it’s easy to imagine the misery of those feuding families who, as The Earl of Carnarvon reported in 1839 : “. . . have been born and married, have lived for 20 or 30 years, and in some cases . . . have even spent their whole lives within the enclosure of these gloomy walls.’’

High above a deeply indented coastline littered with shrines erected in the memory of those who lost control of their vehicles on these perilous roads, I reach the mule track leading to the remains of the Temple of Poseidon where sailors, about to round the dangerous Cape Matapan, once prayed for a safe passage. One of the mythical entrances to the Underworld, this is where Fermor ended his trip.

As a wind shrieks across the Taygetus’s scrub-covered shoulder blades, I contemplate the darkening stretch of sea where Fermor came in a caïque more than half a century ago. I imagine him jumping overboard and swimming into the tiny cave in pitchy blackness, hands feeling the splintered walls, seeking the crack that led down to Hades, and I suddenly feel very cold.

In the gathering gloom I drive back to Areopoli along a road lighted only by the flickering candles of accident-victim’s shrines. Entering a taverna I order Fermor’s favorite tipple as a pick-me-up.

Raising my tumbler of Retsina I drink a silent toast to the man who braved the capture of German General Kreipe during WWII, but was perhaps braver still in choosing to settle in this stunning, yet still savage region, whose history is one of constant strife.