Trendy and naughty? Must be in Amsterdam 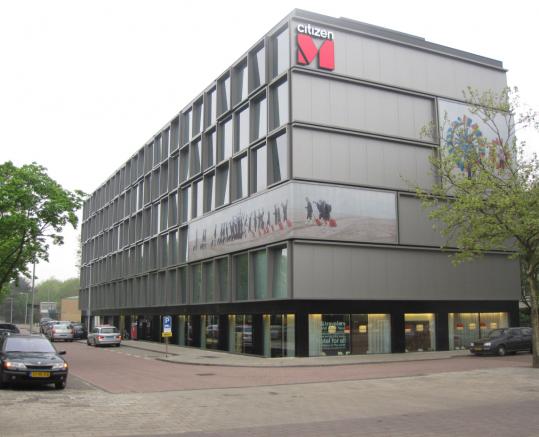 The citizenM in Amsterdam City looks like its rooms were stacked to make a hotel. And they were. Modern is the theme throughout, from the lobby to the technologically equipped rooms. (Photos By Wessel Kok/For The Boston Globe)
By Diane Daniel Globe Correspondent / July 11, 2010

AMSTERDAM — “Maybe it’s supposed to be part of the fun, that you make your own bed,’’ my husband, Wessel, suggested as we stared at the large cover-less bed in our tiny room.

It sounds crazy that we would even consider absentee bedding to be some sort of game. But at trippy citizenM, a Dutch hotel chain lauded for its playful modern style and interactive technology, anything seemed possible. The hotel’s Amsterdam City location, which opened in 2009, was named “trendiest hotel in the world’’ by a TripAdvisor survey this year, and its first location, which opened at Amsterdam’s Airport Schiphol in 2008, won the European Hotel Design Award of the Year. (A third location is due to open in Glasgow later this year.)

It was my idea to stay at citizenM for its combination of high design and relatively low rates. Wessel thinks brightly colored, misshapen furniture is all a bit silly, but he does appreciate a bargain.

The fashion forwardness and technological trickery caused us to doubt ourselves in the missing-cover caper and beyond. Every little function in the room (blinds, lights, music, television) was operated by a remote control device called a “mood pad,’’ which didn’t always work. Also taking some getting used to were the toilet and shower, each encased in separate sci-fi glass cylinders half filling the 150-square-foot room.

So anything seemed possible. Perhaps there was a button for the bedspread? Or a dome (a cone of sleep) would cover us when we reclined?

“Maybe we should check out these instructions,’’ I offered, looking at a thick tag hanging from a doorknob stating, “To take full advantage of your room, please read the following,’’ and listing nine categories of instructions. I had brought less reading material on the flight over.

So where’s the duvet?

Finally I gave up the game and called an “ambassador’’ for help. I wondered if the mood pad — which could change the color of the room lighting from orange to purple to pink with one tap — would flash a red L for loser on my forehead.

It turned out, after all that, that the cover had indeed gone missing and the ambassador had to hand-deliver a new one, just like in the old days.

Closing the door, I learned the chilly way, wasn’t the only trick. One must stand in the very center of the pod to activate the water, which comes from above and starts off cold. After it warmed, though, I loved my rain shower, along with the thrill of looking out from the transparent tube and through the fifth-floor picture window.

More modest folks will want to draw the curtain between window and shower, and also keep pod-mates on that side of the room. Actually, more modest folks shouldn’t stay here. Showers appeal to the voyeuristic, and while the opaque toilet tube is fully encased, sounds are not fully muffled, and everyone is well aware of what you are doing in the middle of your bedroom.

CitizenM’s 215 rooms, which were built off-site and then stacked together to form a hotel, are perfect for two things: sleeping and watching television from the bed. The TV comes with free movies on demand, including adult films. So make that three things.

While Wessel mourned the room’s lack of hanging-out space, I thought the lively oh-so-mod sunken lobby more than made up for the roomlets. The public space, into which unobtrusive hipster tunes were piped, is divided into several parts: Internet stations (rooms have free wireless), self-service check-in kiosks (our check-in didn’t go through; “oh, ambassador . . . ’’), bar and food area (self-service off hours), and three sitting areas with ample countertops for computer use. Windows look onto an active street, though the hotel is a good 30-minute walk from Amsterdam center. (A nearby tram stop makes for a faster commute.)

CitizenM has teamed with Vitra, a famed European manufacturer of designer furniture, to put together the seating areas, which look like playgrounds for modernists. Pieces include a yummy Marshmallow sofa by George Nelson, several chairs and the famed rainbow coat rack by Charles and Ray Eames, Vegetal chairs by brothers Ronan and Erwan Bouroullec, and an eclectic selection of far-out lighting. A nice touch was a framed print of the Netherlands’ Queen Beatrix by Andy Warhol. Who knew?

Even the kiddie corner in the lobby is stylin’, with bright pint-size curvy Panton chairs, Hella Jongerius’s Porcupine Desk, and the Eames’s iconic plywood elephants.

We didn’t see children here, which is just as well. If citizenM were a movie, it would be PG-13, or even R. While the room’s bathroom facilities might be acceptable for the young ones, adolescents or teens might jump out the window before using a transparent shower, curtain or no.

And then there’s the matter of the art outside the lobby elevator. A copy of the oversize photography book “Artists and Prostitutes’’ by David LaChapelle lies open on a pedestal, like a dictionary of devilish delights, while on the opposite wall hangs a poster showing the hotel’s exterior at night. You can see into each room window, where people of various shapes, colors, and sizes are doing various naughty things.

While citizenM is over the top with its branding — “citizen’’ icons and too-clever text are all over the place — I found myself enjoying the energy more than groaning over the gimmickry.

Still, the morning after I first fell hard for citizenM, my infatuation started to wane.

I pressed the mood pad to open the shades. Nothing. This time, instead of imagining what kind of fun challenge this might be, I called an ambassador.

“The mood pad is frozen; you just need to reset it,’’ she said, like this was a normal occurrence, which she confirmed that it was.

I followed the reset instructions, and five minutes later the device froze again.

Finally, I saw citizenM for what it was — like a high-stylin’ party girl who would never be a stable friend but sure is fun to visit.