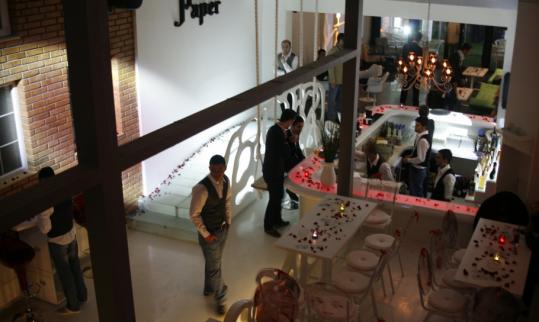 PRISTINA, Kosovo — This Balkan city is perhaps the ugliest, and most fun, capital in Europe.

Once synonymous with war and ethnic tensions, Pristina is now the peaceful, vibrant, and fast-growing seat of government for Kosovo, the world’s newest country after its leaders declared its independence from Serbia in 2008.

The city still faces challenges — the prevalence of white United Nations SUVs on the streets attests to the international community’s continued monitoring of relations between ethnic Albanians and Kosovo’s 7 percent ethnic Serb minority, for example. But visitors can’t help but feel the optimism and energy of Kosovars determined to put their worst days behind them.

After the 1999 US-led bombing campaign that brought an end to atrocities in the then-breakaway province, an intervention that makes Americans particularly welcome here, Pristina doubled in size to around half a million people.

Young people flocked to reopened schools and jobs in international organizations, while many unskilled adults took advantage of the cease-fire to seek better-paying work abroad. Coupled with Kosovar Albanians’ high birth rates, the migrations resulted in the average age of Kosovo residents dropping to around 26 today.

Where there are twentysomethings, there are wild times, and Pristina is home to high-end bars, chic clubs, and quality restaurants.

We met Bakalli on Perandori Justinian Street, a narrow road a couple of blocks south of the United Nations Mission in Kosovo, or UNMIK, and the Grand Hotel Pristina, the tallest buildings in the center of the city.

Both glass-and-concrete towers typify Pristina’s architecture. They’re hideous. It’s hard to reconcile the city’s lively social scene with such poured-concrete monstrosities, but the contrast shows how Kosovo’s present is leaving behind its past as a provincial town in communist Yugoslavia.

The names of many streets in Kosovo have changed over the years, switching from Yugoslav times, when ethnic differences were played down, to Serbian names in the 1990s and then to Albanian today. It’s best to strike out from the UNMIK and the Grand Hotel and ask Kosovars, who usually speak English, for directions when you’re in the vicinity of your destination.

Bars, clubs, and restaurants line Perandori Justinian, in the Pejton neighborhood (pronounced “Peyton’’), which teems with people most nights.

The Paper Club was my favorite. Slick and decorated in minimalist white, it sported swings suspended from ropes hanging from the ceiling instead of chairs at the bar. On a Saturday evening, it was packed with tall, dark-haired women and well-dressed men who appeared more corporate, or at least more like employees of nongovernment organizations, than the macho types one typically encounters in similar clubs throughout the Balkans.

Drinks at the Paper Club, like in most bars in Pristina, were a few euros apiece. The city, on the whole, is cheap. A taxi from one end of town to the other is less than $8.

To the north of UNMIK and the Grand Hotel is another entertainment district. Take Pristina’s main street, Mother Teresa Boulevard, until it becomes a pedestrian-only walkway. At the end of the walkway, on the left, is Zanzibar, a basement club in the Qendra neighborhood that features live music.

A former political party clubhouse and hangout for freedom fighters who wore guns as they sipped beers during the war, Zanzibar now offers raucous bands playing everything from 1970s cover tunes to experimental jazz.

Explore Qendra and you will also find Kaqa (pronounced “Kacha’’), a rustic-style bar set back from the street, and De Rada, an upscale restaurant frequented by Pristina’s lawyers, journalists, and other members of the smart set. A meal for two, including drinks, costs $30.

When Pejton and Qendra turn quiet, ask a cabdriver to take you to Johnny’s, a saloon without a sign on a nameless side street that’s a short drive from Qendra.

Marked only by a black door, Johnny’s is a popular after-hours joint in the city, a favorite among locals and expats alike. It gets packed. Tightly packed. Claustrophobics should beware, as should asthmatics, because Kosovars smoke heavily. For everyone else, this living room-size venue is a great opportunity to mingle in the crush.

For sightseers, an oddity is the recently unveiled statue of Bill Clinton, who as president ordered the air strikes that ended Serbia’s control of Kosovo. Rather underwhelming, the 11-foot-high bronze figure of him with an outstretched hand on Bill Clinton Boulevard is a 20-minute walk south from UNMIK. But even the most jaded Americans will feel a tinge of pride.

More interesting was Sultan Murad’s Tomb, a $10-one-way taxi ride from the city center. Christian knights purportedly killed the Ottoman Sultan on the tomb’s location in 1389 during an epic battle on the so-called Field of Blackbirds, the area Serbs still consider the cradle of their nation.

While the Serbs dispatched the Sultan, the Ottomans won the battle and subjugated the Balkans for the next 500 years, converting most Albanians to their Muslim religion. Possession of the field is a major reason Belgrade refuses to acknowledge Kosovo independence to this day.

Recently renovated with Turkish aid money, the tomb is a reminder of a bygone age.

John Dyer can be reached at johnjdyerjr@gmail.com.

You can enter Kosovo from Serbia, but you cannot enter Serbia from Kosovo. Those travelers have not passed through a Serbian border checkpoint.
What to do
Kaqa
Fehmi Agani St.
011-377-44-112-200
Also called Outback, as it is set back from the street, Kaqa has a nice vibe of young folks downing beers, mingling, and dancing to live music.
Paper Club
1 Perandori Justinian
011-377-44-592-249
The coolest place in Pejton, where the beautiful people go.
Tingell Tangell
Rexhep Luci Street
011-386-49-886-292
We kept finding ourselves coming back to this Bohemian coffee shop-cum-lounge. Think filmmakers, artists, and students. It’s hidden between apartment blocks near the Grand Hotel Pristina, so ask for directions.
Zanzibar
Hajdar Dushi Street
011-377-44-152-155
A basement jazz club/bar that still retains a socialist feel, but which reels with young and old in search of rowdy camaraderie. .
Where to eat
De Rada
50 UCK St.
011-381-38-22-26-22
Dimly lighted, with brick walls that recall Boston’s high-end South End eateries, De Rada is a popular spot among Pristina’s movers and shakers. Try the lamb steak for $13.
Posh Nosh
1B Mother Teresa Blvd.
011-386-49-261-626
A nice lunch spot near the enormous sculpture of the word “Newborn’’ in the center of town. Excellent sandwiches for $8.
Where to stay
Grand Hotel Pristina
Mother Teresa Boulevard
O11-381-38-220-210 (-211)
www.grandhotel-pr.com
A revamped communist standard occupied by the Serbian Army during the
NATO bombing campaign, its central location is key. Doubles $150.
Guesthouse Velania
4 Emrush Miftari
011-381-38-531-742
www.guesthouse-ks.net
Outside the city center but ideal for backpackers and others seeking a cheap but clean and safe place to crash. Singles $15. An apartment for a group about $52.