Through chapter and verse to the next pint 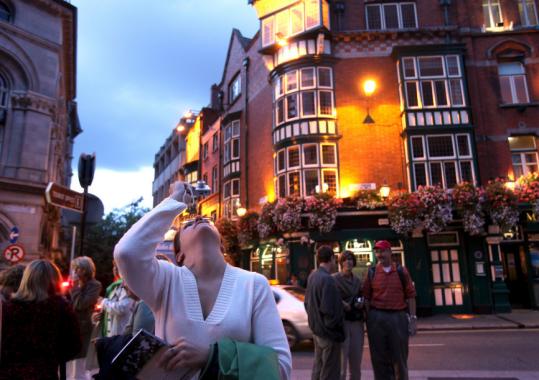 My husband and I hadn’t been here in 25 years, and were only in Dublin now due to happy happenstance: a layover en route from Italy. We had only one night; what to do with such precious time? Any plan would have to include Irish music and a pint of Guinness. Our children (17 and 23) had never been to Ireland, so we also wanted to cram in some culture.

The Dublin Literary Pub Crawl fit the bill: history, music, and literature, washed down with a pint. Led by two actors, the tour would take us to several pubs frequented by some of Ireland’s greatest writers, who are considered gods here: Joyce, Beckett, Shaw, Yeats, Wilde, and Behan, among others.

Colm Quilligan and Frank Smith were the “hosts and entertainers’’ who greeted us, along with 15 other tourists, at The Duke pub at 7:30 p.m. In an upstairs “snug’’ (a small private room), they warmed up the crowd with a hearty rendition of “The Waxies’ Dargle,’’ then donned little black bowlers and performed a scene from Samuel Beckett’s “Waiting for Godot.’’ The two-act play, they said, was once critiqued by a London critic: “The only play ever seen in which nothing happens - twice.’’

It was these little details, both humorous and historical, that made the tour lively, and the pints along the way didn’t hurt. The two gave the group a crash course on James Joyce’s epic “Ulysses,’’ explaining the significance of June 16 or Bloomsday. It’s the day in 1904 on which the novel is set, and of Joyce’s first date with Nora Barnacle, who would become his lifelong companion and eventually his wife. At The Duke, our guides reenacted a bar brawl and told us that it’s the best-known scene because it’s in the first chapter “and very few people get beyond it.’’ Smith then read from Molly’s soliloquy that ends the book: “. . . so he could feel my breasts all perfume yes and his heart was going like mad and yes I said yes I will Yes.’’

“Now, you don’t have to read the book,’’ Smith said dryly.

Our second stop was not a pub but Trinity College, where we huddled in the early evening chill - though it was June, it was raw - among the severe stone buildings. “A cultural stop without drink,’’ we were told. “The next stop will be a drinking stop without culture.’’ Oscar Wilde attended classes here briefly, in the era when students had to be at their desks at 6 a.m. for a full day of work and prayer services.

Wilde, who called his fellow students “a dreadful lot,’’ dropped out and went to Oxford. He and his mother, we were told, began the Society for the Suppression of Virtue, a group consisting of the two of them. In 1882, Wilde made a memorable lecture tour of the United States, and Smith regaled us with a rendition of a flamboyant speech he delivered before miners in Leadville, Colo., after which he promptly drank them all under the table.

To prepare us for the next pub, Quilligan provided the history of the snug. In Ireland back in the day, the Roman Catholic Church did not think it fitting that women should drink with men. So smaller, private rooms off the main bar were added. But the church needn’t have worried. As Brendan Behan declared: “The Irish are the only men in the world who would crawl across 20 naked women to get to a pint of Guinness.’’ Even the Irish in our group - there were a few - cracked up.

At O’Neill’s Bar, we checked out the snugs, the roof bar, the carvery. Quilligan and Smith were running a trivia contest along the way: Whoever had the most correct answers would win a Dublin Literary Pub Crawl T-shirt. Some of us preferred to enjoy our Guinness and pub grub, while others were bent on the prize. At O’Neills, a large, meandering place with lots of rooms, we were instructed to look for charcoal sketches of four famous Irish writers. There they were, in the last snug I checked: Patrick Kavanagh, William Butler Yeats, Sean O’Casey, and Flann O’Brien.

Dublin has 850 pubs, we were told. And how do you cross the city without passing a pub? “Go into every one of them,’’ Joyce famously said.

Though we had only about 20 minutes at each pub, that didn’t stop much of the group - all ages, mostly European - from downing a pint at each. “Out of respect for Behan,’’ one Frenchman said as he raised his mug.

But our next stop was the site of an old Protestant church that closed in the 1980s because of declining attendance, and is now a tourism office. It was here that we were told the Vikings first settled Dublin in 841. Next up was The Old Stand, a 300-year-old pub on Exchequer Street. Our trivia question: What was the pub’s name in 1920? (A photograph on the wall revealed the answer: The Monico.)

The Old Stand drew a political crowd, and it was here that Irish republican Michael Collins obtained information about the British secret service.

It was approaching 10 p.m. when we at last stopped in front of Davy Byrnes pub, used by Joyce as a backdrop in “Ulysses.’’ This was also one of Behan’s favorite hangouts, where he uttered his famous line about being “a drinker with a writing problem.’’ He began drinking at age 8, we were told, and referred to Irish liquor as “holy water.’’ When he was 16, he joined the Irish Republican Army and was sent to juvenile lockup for possession of explosives. When he returned to Dublin, he learned that the IRA had sentenced him in relation to a shooting. He said: “I was court-martialed in my absence and sentenced to death in my absence, so you can bloody well shoot me in my absence.’’

On a trip to Canada, Behan was swarmed by reporters firing questions at him. One asked him why he was there. “I saw a sign that said ‘Drink Canada Dry’ so here I am,’’ Behan responded.

Today, the Davy Byrnes is a sleek bar and restaurant catering to a fashionable crowd; Behan would doubtless be appalled. But murals of Joycean Dublin remain, including one painted by Behan’s father-in-law. In “Ulysses,’’ Leopold Bloom described Davy Byrnes: “Nice quiet bar. Nice piece of wood in that counter. Nicely planed. Like the way it curves.’’

The tour over, it was time to grade us all on the trivia quiz. A young man from Chicago won the T-shirt, said thank you, and promptly walked into The Bailey (“Was a great pub frequented by Charlie Chaplin, Peter Ustinov, Richard Harris, has great steaks,’’ said our guides) for a celebratory pint - a fitting end to our crawl. It was a great couple of hours; if only Behan or Wilde had been around to raise a pint with us. “One drink is too many for me,’’ said Behan. “And a thousand not enough.’’