THIS STORY HAS BEEN FORMATTED FOR EASY PRINTING
Italy

A family vacation complete with hairpin curves and lemons, beaches and pizza 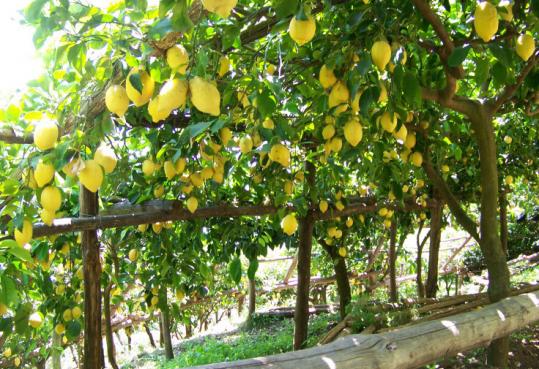 A grove bursting with lemons was an unexpected find on a mountain hike, high above the streets of Amalfi. (Photo By Bella English/Globe Staff)
By Bella English Globe Staff / June 28, 2009
Text size – +

We wanted to take a family vacation when my son graduated from high school, and we settled on a two-week period in late May and early June when all four of our schedules would align. We also settled on a place: the Amalfi Coast, that dramatic strip from Sorrento to Salerno where the mountains meet the Mediterranean, lemons meet limoncello, and the sky meets the sea.

But then our dreams met reality. How could we justify taking a trans-Atlantic trip during a recession? First, we figured out that we could cobble together four frequent flier tickets - to Rome by way of Dublin, of all places. And last fall, I began saving every $5 bill that came my way, with a resulting $1,200 for spending money by the time we left.

Then we signed on to Intervac.com, the same house-swap site we had used years ago for a wonderful vacation in France. Though there are thousands of listings all over the world, there are few in Amalfi. I guess no one ever wants to leave there, for good reason.

We finally found one place in the seaside town of Maiori and sent out a pitch: Would they trade their two-bedroom apartment 10 minutes from the beach for our suburban house 20 minutes from Boston? They couldn’t swap during our time frame, but we could rent the apartment, which was their “holiday home.’’ It was cheap, 400 euros a week, or just under $600 (at $1.45 to the euro). We wired them a down payment for a two-week stay and several months later found ourselves lugging suitcases and following Tina and Giovanni from the Maiori bus stop to their digs.

The place wasn’t fancy, but it was clean and convenient. OK, the bathroom was a bit dank. But there was a small patio, where we’d head with our wine, bread, and cheese, and a deck of cards. Before handing over the keys, the couple gave us a tour of the town, pointing out all the essentials: the pasticceria, the gelateria, the forno or bakery, and best of all, the Lemon Garden, the pizzeria that became our hangout. Among the four of us, we put away about 30 pies there and (for the adults) almost as many limoncellos, the local liqueur made with the area’s famed lemons.

Ah, Amalfi! It wasn’t easy getting there - from Rome, we took two trains and two buses - but the final bus ride along the coast was breathtaking. Our heads kept swivelling right to left, alternating sweeping ocean vistas with craggy mountain views. Charming beach and hill towns spread out in front of us and every other cliff seemed to bear the imposing remains of pirate towers, fortresses, or monasteries.

There is but one road that snakes along the jigsaw-puzzle coast, carved out of the mountain and barely two lanes wide. Our bus weaved around hairpin turns hundreds of feet above the sea. Whenever it met another bus, it made for high drama. One bus would have to stop and let the other inch by, side mirrors folded in. With our windows open, you could count the freckles on the faces of passengers in the other bus. The drivers seemed to be operating on little more than bravado and a horn.

We had been warned not to rent a car in Amalfi; the roads are not for the uninitiated and the local drivers, particularly those on scooters, appear to have a death wish. The buses run often, but you must change in the town of Amalfi for most of the routes. They can arrive early, or late. And they may already be full. Still, we managed to negotiate our way up and down the coast, and the couple of disasters we had make for memories. (Where else could it take four hours to get to the apartment, four miles away?)

The fabled Amalfi Coast was popularized in the 1950s by director Roberto Rossellini, who set many of his films here. It includes quieter towns like Maiori, known for its long, pebbly beach and boardwalk, and pricy Positano, the popular resort that ranges from the sea up into the hills, its pastel houses set in leafy terraces almost like rows of bleachers. Everywhere, the landscape is dotted with the bright yellow of trees heavy with lemons, which can grow as big as grapefruits.

Our local pizzeria, the Lemon Garden, is aptly named: Tables and chairs are set in a lemon grove. Occasionally, a ripe lemon would plunk to the ground near us, once narrowly missing my son’s head.

One day, we walked - single file - along the road to get to the next town, Minori, where we ate at a beach restaurant and bought some of the handmade paper from the artisans who ply the trade. Ruins of the paper mills still lie on the outskirts of town, and the Paper Museum housed in a 15th-century mill in Amalfi is a fascinating place to spend an hour.

Another day, we rented a boat from the Maiori dock and took off for Positano. Seeing the coast by boat is a visual feast: We passed isolated beaches and forbidding grottoes and took the measure of fishing villages such as Furore and Praiano and the larger towns of Amalfi and Positano.

In Positano, we briefly debarked, got a gelato, and strolled the serpentine alleys with tiny shops offering handmade shoes, lemon products, and colorful ceramics. Back on the boat, we headed in the other direction, dropped anchor off a beach not far from Salerno, and swam.

My favorite spot was the medieval town of Ravello, about three miles - and nearly straight up - from Minori. “Set closer to the sky than the sea,’’ as André Gide wrote, Ravello boasts the most panoramic views, a rich history of music festivals (Wagner composed here), and a couple of stunning villas with formal gardens. One night we splurged and ate at Palazzo Sasso, built in the 12th century. With impeccable service and stellar views, the place made us feel like royalty, until we had to pay the bill. After dinner, we walked over to the Villa Rufulo, where we attended a piano and violin concert during which my son took out his headphones and plugged in Eminem.

The Amalfi Coast is ideal for hiking, with ancient footpaths and stairs that once were the only connection between villages. My daughter, husband, and I took several half-day hikes (teenage son slept in) that wound up and down steps, along donkey paths, past ruins and waterfalls and old churches, by goatherds, through woods and once, by accident, someone’s lemon grove.

On one hike we discovered our favorite restaurant, San Giovanni, in the hill village of Pontone - a speck, if that, on the map. Fortified by plates of calamari, risotto, and bruschetta, we pushed on to Ravello, way above. Coming back into Minori after a hike, we were thrilled to see the Giro d’Italia (Tour of Italy) cyclists zoom by in a blur.

Best view of the trip was at Villa Cimbrone at the tip of Ravello, 1,500 feet above the Mediterranean. These formal gardens include fountains, statues, lanes, a tea garden, and a terrace with several marble busts on pedestals. It was difficult here to tell where the blue of the sea ended and the blue of the sky began.

Biggest ripoff was the trip to the isle of Capri, especially the Blue Grotto. It cost 11 euros each to take a boat to the grotto from the Capri waterfront, and another 10 euros to go inside. There were literally boatloads of people waiting to enter the cave, accessible only by rowboat. Sergio finally rowed over and motioned for us to get in and flatten ourselves, our heads clearing the sole entrance by a hair or two. Inside the turquoise grotto, Sergio launched into a hearty version of “Volare,’’ which all the other rowers seemed to be belting out, too. At the end of the five-minute round trip back to our bigger boat, he held out his hand for a tip. I whispered, “five euros’’ to my husband, and Sergio shook his head. “Ten,’’ he said, suddenly summoning English.

The one bright spot on Capri was the chairlift to the top of the island, where we enjoyed a beer and a 360-degree view of the Bays of Naples and Sorrento.

You can’t visit Amalfi without a trip to Pompeii, the town that in AD 79 was buried under volcanic ash when Mount Vesuvius erupted. The excavated site includes well-preserved remains of the amphitheater, homes, businesses, and the plaster casts of fleeing victims. Nearly two millenia later, frescoes, political slogans, and even surgical instruments remain.

But some of our best time was spent at our local beach, sunning and swimming and, at night, strolling or playing cards at an outdoor bar, watching the waves lap the shore and the lights come on in the surrounding hills.

Two weeks had flown, and after one last pizza, one last sip of limoncello, one last gelato, we wrote Tina and Giovanni a goodbye note, closed the apartment door for the last time and headed back to Rome. Our $5-bill vacation stash was gone, but to a very good cause.