WIESBADEN, Germany - Thanks to the Internet and its vast genealogical resources, it's relatively easy these days to trace your family's history. But beware: A few clicks of a mouse can start a journey that may take you to unexpected places - emotional and physical - and in my case, it was to a lichen-covered gravestone in an old Jewish cemetery.

"Roots travel" is huge these days, and Germany, ancestral homeland of more than 40 million Americans, is an increasingly popular destination. But until recently, I never would have imagined coming here to research my ancestry.

My family name is Tree, with roots reaching back into medieval England. Or so I believed for more than 50 years, along with the story of my grandfather, M. Maxwell T. Tree. According to family legend, this father of three had joined the French Foreign Legion as a pilot in World War I, dying gallantly in 1916 when his plane was shot down.

My husband had caught the genealogy bug while researching his Irish-American family's history. One day, in the course of checking passenger lists on the Ellis Island website, he spotted the name M. Maxwell T. Tree. There could have been only one person with that name. My grandfather had arrived in New York aboard the British liner Imperator on Nov. 14, 1920 - four years after he was supposed to have died.

A myth exploded meant a mystery to solve. A retired journalist, my husband was like a bloodhound on the scent. Our first clue came from a question for householders on the 1920 federal census: "What was your father's native language?" My grandfather's answer: "German." The real stunner, however, was his 1920 passport application. On the form he supplied his father's name: Lippmann Tannenbaum.

Further research revealed that my great-grandfather had been born in the village of Mansbach in the German state of Hesse and was 17 when he arrived in New York in 1868. According to stories on the New York Times archival site, he became a major supplier of precious stones to Tiffany's and at one time owned the world's largest tourmaline mine.

In the Times archives I also found my grandfather's death notice. Maxwell died on Jan. 3, 1923, in Wiesbaden. Contacted by e-mail, a helpful city clerk found his death certificate, which gave the place where he died, the Hotel Kaiserhof. She also discovered that he was buried in one of the city's Jewish cemeteries.

We didn't rush to Germany after learning all this. Frankly, I had to process my new identity and my father's reasons for obscuring it. Understanding why my grandfather had changed the family name was easy. War with Germany was looming and it was unpopular to be German-American. However, the reason my father fabricated a story about his own father's death began to make sense only after we obtained a copy of his 1941 application for a job with the US Treasury Department. War with Germany again seemed probable and my father must have worried that his patriotism would be questioned.

Finally, this year I was ready for a visit to Wiesbaden, a famous old spa town near Frankfurt. Our first stop was the Spiegelgasse Museum, dedicated to the city's Jewish history and housed in an early-19th-century complex that includes a ritual bathhouse and a rabbi's residence. Over the past 20 years its group of mostly non-Jewish volunteers has sponsored many projects reminding residents that a thriving Jewish community lived here before World War II. A volunteer gave us a map of the Jewish cemetery, supposedly pinpointing my grandfather's grave.

Next morning a taxi dropped us off at the front gate of the Plattestrasse Cemetery. For more than 20 minutes we strolled past row after row of well-tended graves. Finally we came to a brick wall with a gate opening into the gloomy, neglected, and cramped Jewish cemetery.

It was a small space and finding the grave should have been easy, but despite the map, we couldn't locate it. Finally we gave up and spent the rest of the day exploring Wiesbaden as my family might have done.

Unfortunately, The Kaiserhof, the grand spa hotel in which my grandparents and their three children were in "temporary residence," according to their passports, was destroyed by Allied bombs. We rode the vintage 1888 funicular to the city's mountaintop park and visited the grandiose 19th-century Casino Wiesbaden and handsome public mineral baths. In the Hesse State Archives we found a copy of the register of Jewish births from the village of Mansbach. Lippmann Tannenbaum's birth was recorded and his father's occupation was described as "first singer," a cantor.

We had planned to visit the Jewish cemetery in Mansbach but discovered that it would be locked that day, the Jewish Sabbath. Instead we took a train north to Bremen, an exquisite medieval city with a downriver port on the North Sea, Bremerhaven. The German Emigration Center there was moving and illuminating but neither in it nor in the also evocative Ballinstadt "emigrants village" in Hamburg could we learn much more about my elusive Tannenbaums. Still, we came away with a better sense of what it must have been like for a teenager from a small town to set off alone for America.

As our departure neared, I fretted about our failure to find my grandfather's grave. Finally we phoned Georg Schneider, the volunteer at the Spiegelgasse Museum who had given us the cemetery map. He insisted on meeting me early on the final afternoon of our trip.

Despite a nerve-racking train mix-up - we took a slow scenic train from Hamburg instead of an express - I connected with Schneider. He escorted me to the grave, which was not far from where we had been looking. Why we couldn't find it initially I can't explain.

Neither can I explain why touching this simple gravestone meant so much to me. My grandmother must have been responsible for the inscription: "Beloved Husband, Devoted Father." It seems certain that she and the children were at the funeral. She was 39 and my father was 15. I have to assume that local relatives had made the burial arrangements for this small, sad family of foreigners.

Currently we are searching for descendants of these kind people, the relatives I never knew I had.

Christina Tree can be reached at ctree@traveltree.net. 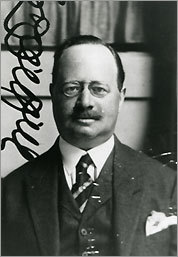 Roots resources
The German National Tourist Office (www.cometogermany.com) and the German Information Center USA (www.germany.info) have created an elaborate website (www.germanoriginality.com) to help Americans of German ancestry explore their heritage. It has links to a wide variety of sources for genealogical information such as birth, marriage, and census records.
Two important museums, the German Emigration Center (www.dah-bremerhaven.de) in Bremerhaven and Ballinstadt (www.ballinstadt.de) in Hamburg realistically re-create the immigrant experience with interactive displays, films, and photos, and replicas of ships and their sleeping accommodations.
Both museums have resident genealogists who can help visitors trace their families, and banks of computers linked to the Generations Network (www.ancestry.com), the largest genealogy research website with more than 5 billion records on line. These include the Port of Hamburg ships' passenger manifests from 1850-1934 with the names of more than 3 million emigrants from Central and Eastern Europe.