Catalan capital reigns over Spain's cuisine with dishes that are creative and . . . 'sincere' 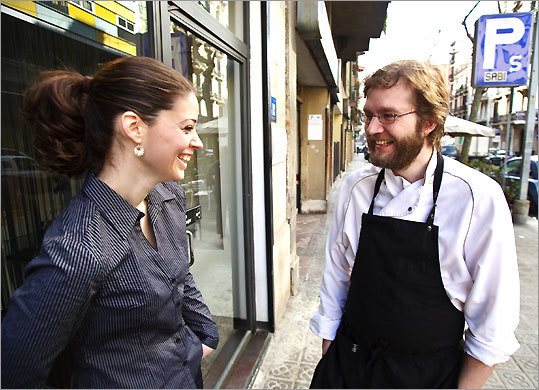 BARCELONA -- Over the last decade Spanish cuisine has been propelled into the global limelight in the slipstream of a culinary cannonball named Ferran Adrià.

For a while, it looked like every chef in Spain wanted to be the next Adrià, creating his or her own gels and spherifications. Instead, the lasting effect has been to give Spanish cuisine a long-lasting adrenaline boost. Instead of burn and fade, eating here has been like watching a slowly building fireworks finale that, just when you think it's got to end, gets better.

Now, instead of slowing in the middle of an economic crisis, there is not one movement, but many. The brightest of the new is "bistronomic": restaurants that combine quality, creativity, and well-timed economy, often run by friends or couples, with Michelin-star-trained chefs in the kitchen.

I meet Luis Plamas, Juan Coma, and Josep Casas-Febrer for a crash course in bistronomics at Gresca, one of the movement's founding restaurants. The three men are all retired or semiretired locals who seem to devote most of their time to dining well. They belong to a Barcelona eating club called La Xefla de Gelida - 30 or so friends who meet once a month to cook a big dinner and tell tall tales.

Get them talking about El Bulli and they start twitching and tipping their heads with excitement, yet the tiny Gresca is one of their favorite restaurants.

"There's simplicity to what he does, but he also creates perfect combinations and not all chefs can do that," adds Coma, referring to chef Rafael Peña's efforts.

When the dishes arrive, the three take a closer look, using their forks to inspect what's in front of them. They had had a big lunch and asked for something lighter than the offerings on the dinner menu. Peña came up with a "salad" of thinly sliced raw artichoke, Iberian ham, Parmesan flakes, and paper-thin croutons under a drizzle of olive oil. Sweet and salty, fresh and crunchy, the flavors and textures play off each other.

"There are three keys to cooking," says Coma. "Product quality is most important. Segundo is the combinations, and third, the exact cooking temperatures. If you've got all of this, the food is perfect."

I see this with my main course: two filets of John Dory, stacked atop cockscombs, asparagus tips, and walnuts. It's just as Coma explained: top-quality fish, cooked so that the skin is crispy, the flesh flaky on the edges and agreeably firm on the inside. The cockscomb adds fantastic texture, playing off the good, gelatinous qualities of the fish, while the nuts and greens give crunch and texture.

It's also the kind of dish that if the chef botches it (Fish and fowl? Cockscomb?), he goes down in flames.

Achieving this level of quality day in and day out while staying within budget is no small feat.

"We follow the market and change our prix-fixe lunch menu every two days," says Peña, who runs Gresca with his partner, Mireia Navarro. "Today we had John Dory, but we'll do something else if it's too expensive tomorrow."

"When I do the ordering for the wine list, I have eight wine shops I work with," says Navarro, who runs the front of the house. "I go with the seller with the best price for each wine."

This mix of economy, variety, and seasonality is key to bistronomic's survival and a gift for a motivated chef who wants to do his own thing. Before opening Gresca, Peña paid his dues, going from a job as a pizzeria cook to gigs that included El Bulli and Lasarte, chef Martín Berasategui's Barcelona restaurant.

"After working in kitchens for years and years, you get tired of having a boss. The only way you can get out from under that is to do a small place," says Peña.

Nearby at Restaurante Embat, run by chefs Fidel Puig Durall and Santiago Rebés Weindl, there is more clever play with combinations of classic local ingredients.

Lunch appetizers include a chickpea, sausage, bacalao, artichoke, and mushroom dish that's a hearty play on textures. Another plate features chorizo, potatoes, and green beans with a poached egg perched on top. Tuck in and the yolk becomes a simple, luscious sauce.

"These chefs are hugely ambitious and spend a lot of time thinking about the dishes they create," says Arenos, the food writer. "They work with products that they [and in turn their clients] can afford, creating high cuisine at reasonable prices."

And this trend is happening all across Spain?

"Nope," he replies. "Only in Barcelona."

Arenos pauses to recount recent Catalan food history: Michelin-starred restaurants grew in number, Spain got its first female three-star chef in the person of Catalonia's Carme Ruscalleda, and Barcelona now has a bumper crop of young chefs with one or two stars in the Michelin Red Guide.

Worthy movements with names like prêt à manger ("ready to eat") and neopopular grew, and high-quality tapas and ethnic restaurants sprang up and flourished.

Yet with all of this happening, it's clear that Arenos loves bistronomic food and its chefs, the stars of Barcelona's bright future.

"It's a rough life," says Arenos. "They don't have a lot of money and their restaurants are their lives."

"Our little guy, Nil, used to sleep over there when we first opened," says chef Roger Martínez, pointing at what looks like a closet shelf behind a curtain.

Martínez cooks while his wife, Marta Floria, runs the floor and does the accounting at their restaurant, La Mifanera, in the Sarrià-Sant Gervasi district.

"It's hard work. Sometimes the bank calls and it gets a little tense," says Martínez. "When you work for someone else, that sort of thing is their problem, but this is our place and we want people to eat well."

Martínez concentrates on creative tapas and rice dishes, a pair of favorites for the local audience. "You don't come here for fish or meat," says Martínez, "unless it's in the rice."

One of his current favorite dishes is an artichoke risotto with local anise liquor, Parmesan, and a dash of espresso grounds. It sounds gimmicky, but it's well thought out.

"There's sweetness from the anise, bitter from the coffee, salt from the Parmesan, and acidity from the artichokes," he says.

"After months and months, you're changing dishes and trying to keep up - it can get tiring. If you're not motivated," says Gresca chef Peña with a grin, "it's impossible."

It's not impossible. It's fantastic.