Ancient colors of Provence mined from the land itself 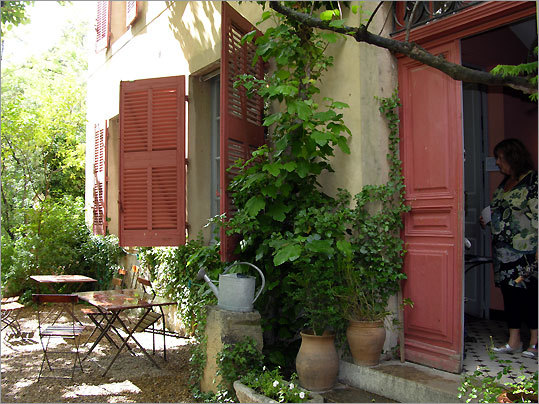 ROUSSILLON, France -- Selectively answering our questions, which we carefully constructed in beginner's French, the plump woman, on the plus side of 50, chatted amiably while directing our car to a dirt lot. "Oui, oui, le parking est ici!"

We had met her when, confused by the vague road signs in Provence, we stopped for directions to hiking trails in the jagged ridge of red and yellow cliffs that were within sight but seemed unattainable by car. The woman seemed to grasp our goal but nothing here indicated the trails, "les sentiers des ocres," were nearby.

A day earlier, we had visited Aix-en-Provence, where we toured the studio of painter Paul Cézanne (1839-1906) whose Impressionist masterpieces owe much to the intense colors made possible by ochre from these hills. Later we would visit the village of Roussillon en Provence and a nearby ochre museum. But now, we needed a change of pace.

After the morning's croissants and coffee at our rented apartment in Vénasque, we drove a twisting mountain road to this valley quilted with farms and sprinkled with grazing sheep, dry-stone huts, and red poppies. Across the greenscape, we could see orange cliffs known as le Colorado de Rustrel, a view that recalls the US Southwest.

The luminous colors of Cézanne's paintings had inspired us to seek out the source of ochre, the impure mineral used as a pigment for millennia. Four hundred miles northwest of Rustrel, in Lascaux, prehistoric cave paintings dating to 15,000 BC portray bison and horses in motion drawn with red and yellow ochre. In ancient churches and monasteries throughout Europe, ochre was used in frescoes painted by artists hired to bring lessons of the Bible to priests and peasants alike. Today, ochre is used to color tiles, ceramics, pottery, concrete, plaster, and fertilizers.

The world's biggest vein of ochre runs here in the Lube ron range. First mined as an industry in the late 18th century, the ochre is exported throughout Europe, the United States, Africa, and the Middle East. The ore is 10 to 20 percent ochre, 80 to 90 percent fine siliceous sand (containing silica), in layers so dense that bulldozers are sometimes needed to break them apart. Factories pump the ore-sand mixture into containers that separate the mixture by centrifugal force.

The enterprising woman charged us six euros to park in her makeshift lot and handed us a glossy four-color map on which someone had hand-drawn Xs and arrows toward trails. We followed her map along a country road and 15 minutes later came upon the actual entrance at a municipal lot that we would have found on the road from Apt. The attendant smiled knowingly at our tale of being charged double to park elsewhere and gave us a more informative map indicating seven marked trails, 30 minutes to four hours in length, restrooms, and a campground.

The hike was easy in sneakers or light boots. We followed well-marked paths through the site, which is partly a former quarry that left freestanding peaks towering above us, steep hills and dunes capped with grasses, fragrant shrubbery, and wildflowers. One section is named the Sahara. An irregular ridge is Cheminées des Fées, or fairies' chimneys. We crossed low streams and climbed wooden steps into ravines thick with cypress and dark pines.

About two hours later, we retraced steps to the car and headed to Roussillon. The village, midway between Apt and Gordes, is poised atop the highest of the red ochre hills at the edge of the Vaucluse plateau. Often listed among the most beautiful villages in France, it is famous for its orange-tinted architecture and winding, narrow streets. Roussillon is also a tourist mecca with at least eight art galleries clustered near the village center and shops full of high-quality decorative arts for the home, especially contemporary ceramics.

Although past the traditional French lunch break, between noon and 2, we had a short wait for a table on the outdoor terrace at La Grappe de Raisin (The Bunch of Grapes), one of many attractive cafes and bars. We ordered a carafe of wine and two fluffy omelets, one filled with ratatouille, the other with crayfish, onions, mushrooms, and chili.

Leaving town, we drove a short distance to Conservatoire des Ocres et Pigments Appliqués, the ochre museum, arriving about 4:15. Since closing time was 5 and the last tour - in French - was underway, we were not charged admission and allowed to visit the museum, workshop, bookstore, an old ochre factory, and outdoor sculpture garden on our own.

"The museum itself is a gem of light, color, and texture that made me want to gobble up every display," said Stacy Seiler, a New York artist and professor of drawing at Parsons the New School for Design here to collect material for a lesson plan about ochre. Seiler said she was drawn in by the walls of evenly spaced rectangles filled with tiles and solid frescoes containing every hue of ochre. Shelves of bottles and old containers held powdered pigments and gorgeous dyes.

The old factory walks you through each stage of the extraction process before ochre is refined into a pigment. There are contemporary examples of the same ochre pigment used in the dyes of couture fabrics and an outdoor art installation, "Labyrinthe," by Francisco Sobrino, constructed of big, boldly colored blocks. "Without the comparison," said Seiler, "I would not have connected the Lascaux cave paintings and vibrant red-orange architecture in Roussillon to the dyes used in creating a Louis Vuitton bag."