Chasing the spirit of the Kinks at pubs and childhood homes 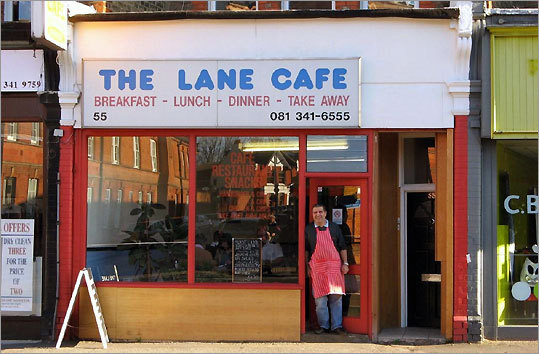 This cafe, with its friendly owner and greasy grill, was used for photos for a Ray Davies record. (Simon Van Den Bergh for The Boston Globe)
By Geoff Edgers Globe Staff / December 21, 2008
Text size – +

LONDON - The Beatles have Liverpool. The Beach Boys can lay claim to Southern California. But to me, no rock band is as closely linked to a geographic territory as the Kinks are to this city. When I listen to their near-flawless '60s catalog, I can almost taste the buttered currant buns and Sunday roast. And there is no song better than "Waterloo Sunset."

So on a recent trip to London, I connected with Olga Ruocco, a longtime fan of the band and guide of a most informal Kinks tour. If she has the day free, her fee is lunch.

First, we made a few choices. To keep our tour under three hours in a city overrun by traffic, many sites needed to be cut, from an important spot in "Lola" to some phone booths employed for the '80s video of "State of Confusion." Knowing I'd be otherwise occupied later in the afternoon, I headed to Waterloo Bridge first thing that morning. A Waterloo sunrise was better than nothing.

Ray Davies, the band's chief songwriter, has always had a sense of place, and a keen eye for reminding us of what came before. In "Come Dancing," the band's 1983 hit, he crafted an upbeat pop song around what is largely a depressing reality.

It's not enough that the dance hall his sisters used to go to is gone. He reminds us in the song that the hall has been taken over, in turn, by a bowling alley, supermarket, and parking lot.

Listening to the song, I feel the melancholic tug of time's passage, even if nothing could be more foreign to me than a '50s-era English dance hall.

We met Ruocco on Denmark Street (the title of a 1970 Kinks song), once known as England's Tin Pan Alley because many music publishers set up shop here. Back in the '60s, at 25 Denmark St., you would have found Kassner Music, the publishing company that signed the teenage Davies, a deal that like so many ended in tension and lawsuits. Today, the street is largely made up of musical instrument stores. But standing there, Ruocco told me about how fans would leave notes and phone numbers for Davies, his younger brother Dave, drummer Mick Avory, and bassist Pete Quaife.

Next, we headed to the Archway Tavern, where the band was photographed for its mid-career masterpiece, "Muswell Hillbillies." Back then, in the early '70s, the pub was a drinking man's place, not the sort a woman might wander into alone. Today, from the looks of it, the Archway is something worse: A nondescript bar painted puke-green.

"It's sad," Ruocco told me as we knocked on the door in a failed attempt to get in. "Obviously things have got to change, but sometimes the change isn't for the better."

We headed next to Fortis Green, in the heart of Muswell Hill, the neighborhood where the Davies brothers grew up in the 1950s. They lived at No. 6, and the house looks pretty much as it did then. It's a humble spot set back a few feet from the street. The centerpiece of the house was the big front room. That's where the Davies family and friends would gather for pub-induced singalongs and also where the brothers started to practice.

Not wanting to pass up the opportunity, I approached the house and rang the bell and met a young couple, the mother holding a baby. It was clear they didn't want anybody coming in, so I merely asked whether we could photograph outside the house. No problem. Everybody does, the man said.

Across the street sits the Clissold Arms, site of the first Davies brothers show. These days, the place is hopping, but as a yuppieish hot spot. (They serve braised octopus.) The Kinks memorabilia, which once included a guitar, has been reduced to a few framed photographs placed in a back hallway near the loo. Why does Ruocco include it on her tour?

"Because it was there at the time, and people are still interested, and it still has its place," she said.

The same would apply to the former site of the Athenaeum, where the boys were said to have been booed off the stage during a talent show. The spot is now a chain supermarket, and one defined by the intense orange logo and signage everywhere. If you stand back from the structure, though, you can see the shape of the old building above.

We had two more stops. The Kinks created Konk Studios so they would have their own place to record. Since the first session in 1973, the band has created several key records there - "Misfits" (1978) and "Give The People What They Want" (1982), to name two. We found a group of Dutch Kinks fans surrounding the stucco building. They were in town for the next day's Kinks Fan Club convention and decided to take their regular pilgrimage to the studio. In the past, they had been able to wrangle a tour of the inside. On this day, we were turned away by an otherwise cordial man who answered the door.

No problem. Dutch fans in tow, we walked a few blocks up the street to the newest spot on Ruocco's tour. The Lane Cafe is better known to Kinks fans as the "Working Man's Cafe," the title of the most recent solo record by Ray Davies. Unlike the Clissold Arms, it's largely as advertised: a gritty, plain spot with a friendly owner and greasy grill. We gathered for coffee and conversation, all the time wondering whether Davies might surprise us by wandering in and asking for a plate of fish and chips.

For tours, contact Olga Ruocco: olga.ruocco@which.net
There's also an online site that outlines the Kinks tour, kinks.freeservers.com/route/.
You can pick and choose from Kinks hot spots, but a few important sites are clustered together. Ruocco usually does the tours on public transportation.
The Clissold Arms is at Fortis Green, N2 9HR. You can get a nice, yuppie lunch there and grouse about the lack of Kinks respect. Right across the street is the house where Ray and Dave Davies grew up. And up the street a bit is the Alexandria Pub, frequented in the old days by the brothers.
Konk, the studio operated by the Kinks since the early '70s, is near Hornsey Station. The Lane Cafe, site of a photo shoot for the most-recent Ray Davies record, is just up the street at 55 Tottenham Lane.
Advertisement
Boston.com Most EmailedSubscribe to SliceBookmark Boston.com Most Emailed120