Some tips to help make your dollars stretch in Europe 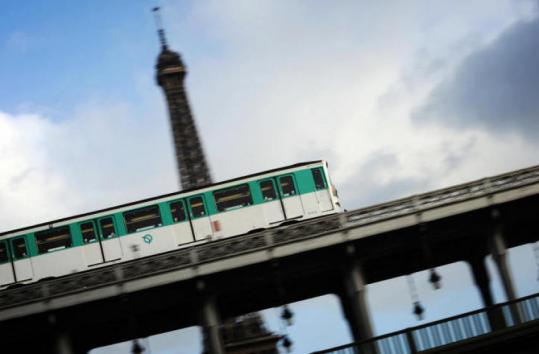 A train of the Paris Metro (cheaper than a taxi) passes the Eiffel Tower. (Martin Bureau/AFP/GETTY IMAGES)
Email|Print|Single Page| Text size – + May 18, 2008

PARIS - I have lived here for almost seven years. I saw the euro arrive and watched the dollar slowly lose ground. In the beginning, the pinch never felt too bad. Would I pay a couple of extra cents for my Saturday morning croissant? Bien sûr! But as the dollar continued to slide, I realized that if I paid with converted dollars when I went to dinner in Europe, I essentially would be paying a third more for the same meal my friends were eating. It adds up fast.

In South America for the past few months, I read every story I came across on how to save money in Europe. They were frustratingly similar and not very helpful.

My least favorite suggestion was a variation on "take a cruise/go to a spa/buy a prepackaged tour." These can all be nice, but really, in terms of soaking up local culture, what's the point? Then there is "go for a shorter time." What, and go home, mow the grass, and lament what a poor schmuck you are because you can't afford a week in Europe? As for "go to Eastern Europe," tell that to the woman who's had a lifelong dream of a romantic trip to Paris, Rome, or London.

Using Paris as an example, here are some tips that concentrate on what visitors do most - eat, go out, get around - that will help to save money across the Continent.

Along with being cheaper than what you'd get for the same price in a hotel, renting a furnished apartment (check out the "Europe" section of the website Vacation Rentals By Owner, vrbo.com, for example) can make you feel like you live in a place. You catch the rhythms of the neighborhood, get to recognize some locals, and you can . . .

One of the finest pleasures of being in Europe is going to food markets, but if you don't have a kitchen, you can't cook. Look for lodgings like bed-and-breakfasts and hostels (hostelworld.com) that let guests use the kitchen.

Years ago, I was a student in France and my parents came to visit at the end of the school year. I have trouble remembering any of the restaurants we ate at, but I have vivid memories of a picnic in the Jardin de Luxembourg and a strawberry tart that nobody wanted to share on the Île Saint-Louis. Getting a chunk of cheese, some cold cuts, bread and wine, and dessert from the pastry shop isn't skimping, it's living. Bonus tip: Pack some cheap silverware, a good, sharp knife, and a corkscrew.

Eat out at lunch

A prix-fixe meal tends to be a better bargain than ordering à la carte. Unlike some restaurants in the United States, it's not necessarily old food the chef is trying to move. At lunch, it's even cheaper, which in fancier restaurants is even more pronounced. Don't worry - you won't leave hungry. Bonus tip: Eat out at breakfast, too. For less than the cost of an overpriced breakfast at a hotel, you can have a coffee and croissants at a cafe and watch the world go by.

If you're settling in at a cafe while having an apéro with a friend or two, get a bottle of wine (or a pitcher of beer or sangria) instead of different drinks by the glass. With the world on parade in front of you and friends by your side, are you really going to have just one glass? Also, watch for wine in a carafe and keep an eye open for bars, cafes, and even restaurants with happy hour specials.

Don't eat at the show

In all of my time in Paris, no one has ever said how great their dinner was aboard a "bateau mouche," the excursion boats. Likewise, eating at the Moulin Rouge smacks of buying Playboy for the journalism. Dinner before a show is likely going to be dull and come at an inflated price, even as part of a package deal. Don't bother.

Museums often have reduced afternoon or evening rates, which can be the perfect time to visit, since the tour groups will have thinned out by then. Watch also for family rates and free days. The Louvre, for instance, is free on the first Sunday of every month and admission goes from nine euros to six after 6 p.m. every day. Much of this information can be found on each museum's website.

Take the tube, but mind the gap

A one-day tourist pass for the Paris Metro costs 8.50 euros, but a single ticket (which has no expiration date) is 1.50 and the per-ticket cost of a 10-pack is 1.10. How many people actually take more than five rides a day to make the tourist pass worth it? Websites for the metros for most big European cities often list prices for all of their ticket offerings. If you're here for a longer spell, watch for week- and monthlong passes.

I once blew my entire budget for a romantic weekend in London on the cab ride from the train station to my friend's flat. Enough said.

Get out of town

Once you leave a city, food and lodging prices become more reasonable. Besides, who's going to complain about a couple of days driving through the European countryside?

If you're going to rent a car on your trip, request a diesel, which is far more common here. Friends in Paris used to stare at me openmouthed when I told them about gas prices in the United States. Remember a buck a gallon? They've been paying several times as much for a long, long time, but at least diesel here isn't subject to taxes that make it more expensive than unleaded gas.

Call me cheap, but is your grandmother really going to wear that Toulouse-Lautrec scarf while she's out grocery shopping? Have you ever bought something for your dad that he liked? Write postcards from a cafe.