Everyone gets Guignol's punch lines 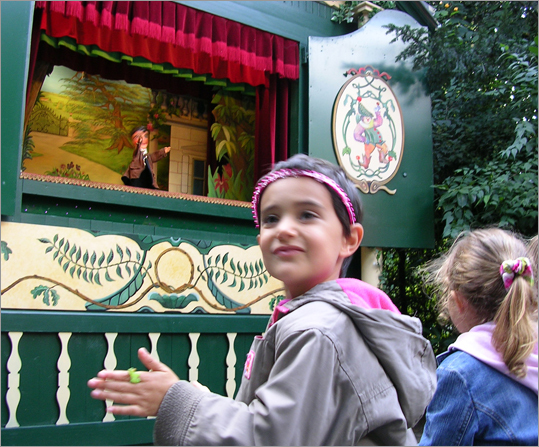 PARIS - After two centuries of misbehavior, a puppet named Guignol is still tweaking authority figures and getting away with it.

Guignol began making mischief in 1808, and celebrates his 200th birthday this year. The puppet remains a French icon, with at least 10 Guignol theaters for children in Paris.

The word "guignol" has entered the French language as a synonym for clown. "The Guignols" is also a long-running TV show for adult viewers, a satire with life-size puppets that comments on the public personalities and events of the day.

What accounts for the longevity of this rascal and his hold on the French imagination? One reason may be Guignol's roots in the rebellious energy that followed the French Revolution.

According to Pascal Pruvost, who directs the outdoor puppet theater in the Parc des Buttes-Chaumont in the 19th arrondissement, Guignol is a free spirit with a license to commit nonsense.

"Adults have the power," Pruvost says. "Guignol gets to act against authority. He gets to do what's forbidden."

Before the performance, Pruvost rings a brass hand bell to call his audience to the show.

The theater fills with eager children, along with parents and grandparents. I sit near the front to watch Guignol in a production titled "The Singing Competition."

You needn't speak French to see that Guignol sets the tune to which the other characters dance. As he polishes off his adversary with expertly administered whacks of his large stick, the children near me rise as one, cheering on their hero as if in gleeful reenactment of the storming of the Bastille.

With his dog, Minochet, Guignol wins an aristocrat's bag of gold, then leads the audience in a merry sing-along. The children know all the words to the popular nursery song.

Pruvost worries that the rough-and-tumble personality of Guignol has been diluted over the years. Along with a partner who helps him work the puppets, Pruvost is doing his best to restore the edge of authenticity.

He points out that Guignol's exploits began by appealing to adult taste. "The satire on TV is closer in spirit to how Guignol started," says Pruvost.

In the 1800s, an unemployed silk worker named Laurent Mourguet invented Guignol in Lyon. Mourguet had been a street peddler before trying his hand as a tooth-puller in an era before dentistry. His puppets originally were intended to attract, and distract, customers - comedy as relief from the pain of life.

Since Mourguet was illiterate, the Guignol shows that evolved were not written down. "It's oral tradition," says Pruvost. "I take from what I've seen; I adapt and improvise."

The character of Guignol is so well known that puppeteers in our day feel free to introduce him into fairy tales and revamped versions of "Three Little Pigs."

One of the largest puppet theaters in Paris is at Luxembourg Garden, and I go there to see how Guignol will fare in a show called "The Sultan and His Treasures." Again, a brass bell calls the audience at show time.

The production is elaborate and glittering. There are chorus lines of pirates in turbans, and the audience claps in rhythm to dance numbers reminiscent of a Broadway musical.

Guignol is the center of attention, instantly recognizable with his wide eyes and the pigtail of a late-18th-century silk worker.

The children shout advice to him during the show, frantically pointing to a villain hiding in the underbrush of an exotic island where the sultan's daughter has been taken.

Not that Guignol needs help to make the story come out right. He cuts through plot twists like a force of nature.

"He rewards the good and punishes the wicked," Francis-Claude Desarthis, the theater's proprietor, tells me later.

Desarthis inherited the Guignol concession at Luxembourg Garden from his father, who built the theater 75 years ago. He apprenticed as a puppeteer at 13 and has been at it for nearly half a century.

"A lot of well-known people have come to this theater," not just children, he says. "[Eugène] Ionesco wrote my father to say how important it was for him as a theatrical experience to watch these shows."

The elder Desarthis casts a long shadow. As caretaker of the family heritage, the son reproduces all the productions just as they were in his father's time. So watching Guignol at this theater is like entering a time warp that takes you back to the Paris children knew in the 1950s.

But Desarthis bemoans the shifting of taste and custom. Business is off. Years ago, older children were innocent enough to enjoy Guignol, "but now it's only 4- and 5-year-olds who come," he says. "Children are spoiled by TV and computers. Families now go away for the weekend."

Desarthis gives a shrug of the shoulders that makes me wonder about Guignol's fate.

For now, if you find yourself in one of the great parks of Paris, listen for the hand bell. An ageless rascal is calling you to mischief.