From beach to forest to cave, under Bermuda’s spell 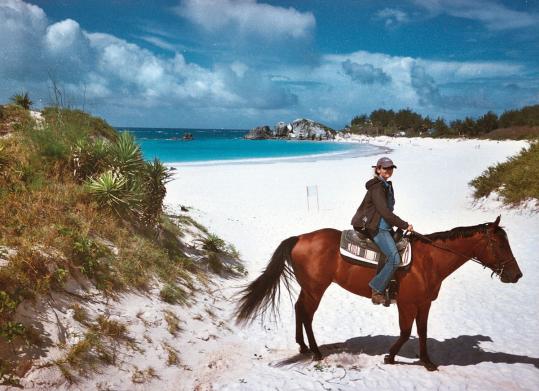 SOUTHAMPTON PARISH, Bermuda - Soft and cushiony, with a shade of pink to enhance the dramatic effect, the sand on the beaches of Bermuda is better than advertised. Hemmed in by jagged rock formations and backed by cliffs, the southeastern shoreline, where the finest beaches lie, is a mix of horseshoe-shaped coves filled with tanning bodies and small jewel-like pockets of sand with just enough space to contain a family or two. This sublime stretch of coast serves as the ideal welcome mat for the waves that have rolled some 600 miles from the coast of Cape Hatteras, N.C., the closest land mass to the west.

Look closely at the ocean and you might misconstrue the clear waters as gentle. Yet this often angry surf has thrust so many ships onto the thorny reefs that surround the island that the term Bermuda Triangle was coined. There are more than 350 documented shipwrecks, including Spanish galleons from the late 16th century, Confederate blockade runners from the Civil War, European luxury liners that went down in the early 1900s, and immense World War II freighters. I was inside one of those freighters, The Hermes, 13 years ago when mysteriously I almost went to my own watery grave.

On assignment to write a scuba diving story, I was 70 feet below the ocean’s surface staring at the pilothouse wheel, which was coated in a slick layer of barnacles. I had just made the descent and my tank was close to full. That was until I labored to get another breath and noticed that my tank was on empty. My partner had raced ahead to view the captain’s quarters, leaving me alone. I quickly swam up the stairwell of The Hermes to the upper deck and then surged with all my strength to the surface while slowly exhaling. I still remember the sun pouring down on my head as I popped above the waterline, gagging and sucking in as much oxygen as possible.

I swam over to the scuba boat, crawled inside, and relayed to the outfitter what had just occurred.

“Must have been a faulty tank, mate,’’ he said in his thick Aussie accent. I thought momentarily about tackling him overboard but I didn’t have the strength. I took off all my equipment and soaked up the rays, happy to be alive.

Even though Bermuda is only a 90-minute flight from Boston, I never had the urge to return, until now. I realized I spent so much time underwater on that first trip that I didn’t give the 21-mile-long island a decent chance. On this trip I would sift my toes through the thick sand, content to look at the sea from a distance. I would bike on a former railroad route, horseback ride on a ridge above those pink sands, and visit an underground cave and its deep lake, where stalactites reflect off the watery surface to resemble the city of Atlantis.

Across the street from that exquisite beach at my hotel, I rent a “pedal-bike,’’ the term used by Bermudians for a bicycle. I cruise up and down a short hill and quickly come to an opening on the Railway Trail. From 1931 to 1948, the Bermuda Railway carried more than 14 million passengers from one end of the island to the other. Then came the advent of the automobile and the line was pulled to make way for a walking and biking corridor.

I head west along the northern shores and immediately notice the cruise ships docked in the distance. Soon I’m biking through a tunnel before entering a lush forest walled in on either side by rock. Occasionally, I have to bike on a road to make it to the next section, remembering to stay to the left hand side, as one would expect in this British overseas territory. Sweet-smelling flowers such as white oleander, purple morning glory, and red hyacinth are in bloom as I make my way on a paved portion of the route into Somerset Village.

Here, I find what is reported to be the smallest drawbridge in the world, mentioned in historical records as far back as 1620. I walk across the red-brick arch, staring at the fish that congregate in the waters below before making my return trip. Children in uniform play cricket and residents tend to gardens as I realize that I’m privy to a Bermuda few tourists witness, away from the island’s beaches, golf courses, and the central hub of Hamilton.

“The Railway Trail is where the children learn to bike. It’s not nearly as crowded as the streets,’’ says Catrin Glawischnig as I follow her on horseback the next morning. Glawischnig left Austria three years ago and has fallen under Bermuda’s spell, leading horseback riding trips on arguably the most spectacular stretch of scenery on the island. I’m atop Gypsy, a 10-year-old brown and white horse who loves stopping for snacks of wild fennel.

A budding botanist, Glawischnig points out the tall cedar trees, fields of wild mustard, the spiky Spanish bayonet yucca, pink oleander flowers, twisted rubber trees, and blooming cacti as we make our descent onto the trails of South Shore Park. Perched on a ridge, we spot Warwick Long Bay, the first of many beaches we would find, and the crystal clear aquamarine waters that ring the island. Buttressed by sculptures of rock, petite Jobson’s Cove is a favorite for young families who wade in the shallow surf. Early sunbathers have already laid claim to the prime real estate on Horseshoe Bay, the most popular beach on the island.

Glawischnig spots the dark clouds of an impending shower in the distance and we retreat uphill, looking at the tops of bay trees whose leaves form a red canopy. The first drops of rain start to fall as I leave Gypsy in the barn and run over to where my driver, Ron, is waiting. He laughs and says that in Bermuda, a shower lasts about two minutes, but leaves you drenched.

“The other half of the island is probably dry,’’ he notes as he drives over to one of his favorite childhood haunts, Spittal Pond. This nature preserve is beloved by bird-watchers who can spot the white longtail birds making nests in the cavernous cliffs, the black-billed cahow flying overhead, and egrets feeding on the shores of the pond. More surprising are the wild hens, roosters, and their young surrounding us as we park in the lot.

“They’re a nuisance. All over the island,’’ Ron says as we walk through the chicks to a trail that leaves us above the ocean waters. Ron used to come here not to bird-watch but to check out the fish. Within seconds, we spot schools of blue parrotfish feeding off the reef.

He leaves me at the entrance of Crystal Caves on the eastern end of the island. In 1905, two boys playing cricket watched their ball disappear down a hole, only to discover this massive cave. Four years later, the voluminous space opened to the public who were invited to paddle the deep waters. The boats are no longer in service, but you can still walk atop a pontoon bridge and see the many intriguing formations reflected off water as clear as gin.

“Each drop of water that falls on your face is a cave kiss,’’ says our guide, Colin. “It will give you one day of good luck,’’ he adds before pointing out stalagmites that look like totem poles and stalactites that resemble organ pipes and an alligator head.

As I exit the cave, I adjust my eyes to the sunlight and stop for an ice cream cone around the corner at Bailey’s. The rum and ginger ice cream is rich and sweet. Relaxing at an outdoor table, in no rush to go anywhere, I conclude that spending a sunny day in Bermuda on land is a day of good luck.

Stephen Jermanok can be reached at www.activetravels.com.