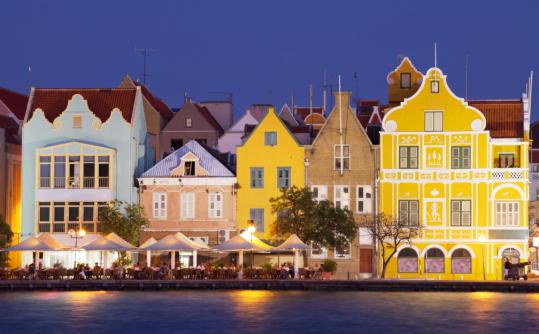 WILLEMSTAD, Curaçao — On a humid November morning I learned that when a square-jawed, tan, and smiling gentleman who refers to himself as Captain Goodlife offers you a ride, it is tough to say no.

Especially when his water taxi skims at white-knuckle speeds over the stunning turquoise sea at Playa Santa Cruz. Eventually Captain Goodlife — I never tire of that name — stops at a spot where you can dive off the boat and snorkel into a cave where the sun reflects off the blue water and turns the walls a stunning shade of cerulean while tropical fish mingle below your feet.

“Make sure you tell everyone about it,’’ says the captain, who is also known by his real name, Juni Obersi, once we’re back on land. Meanwhile, Obersi’s wife is serving platters of seafood and grilled meat to a group of Dutch tourists.

The truth is, I would prefer to keep Captain Goodlife and Curaçao a secret. The island, 40 miles off the coast of Venezuela, is part of the ABC islands with Aruba and Bonaire. Seized by the Dutch in 1634, Curaçao remained a territory until last October, when it became a self-governing country within the Kingdom of the Netherlands. The most industrialized of the former Netherland Antilles, Curaçao does not rely on tourism as its sole industry. As a result, it has remained a bit of a hidden jewel.

The island, however, is hardly undiscovered. It is filled with tall, blond tourists who speak Dutch rather than the local language of Papiamentu (a Spanish-Portuguese-Dutch- English dialect). Europeans are everywhere. But it is mostly unknown by US tourists. When my partner, Patrick, and I told friends that we were planning a trip to Curaçao, we received blank looks. A few asked, “Like the liqueur?’’

That unfamiliarity is one reason Curaçao feels like an escape rather than a destination. The island is filled with honest-to-goodness characters such as the aforementioned Captain Goodlife and herb gardener extraordinaire Dinah Veeris, whom we saw singing to a sick tree at her farm. It is a curious place where one moment you’re soaking in gorgeous ocean views, and the next you’re smelling oil from a nearby refinery servicing the Venezuelan oil fields. The landscape is lush green, but there are cactuses growing everywhere.

“It’s unique because we have so many cultures here,’’ Veeris says as she serves us a tasty ruby-colored drink extracted from something growing in her garden.

In addition to the Arawak Indians who settled the island, the Spanish, Dutch, French, and English occupied Curaçao at one time or another. Its proximity to South America and its role in the slave trade turned the island into a hodgepodge of languages, cuisines, and architecture. It’s probably best known for its rows of pastel colored buildings that look like they were constructed in Amsterdam and painted in Miami, a stretch that is now designated as a UNESCO World Heritage site.

But for most who visit the island, its greatest assets are the dozens of gorgeous beaches just a short drive from Willemstad. There are beaches where you can rent chairs and order cocktails and snacks, and there are beaches with more cats and iguanas sunbathing than people.

At one point, we wondered if we would get the opportunity to enjoy any of those beaches. Curaçao lies outside the hurricane belt, and for the trip, we made the foolish assumption that we would be safe from tropical storms. But our first night on the island, Hurricane Tomas paid a visit. Shortly after sitting down for an al fresco dinner at the Gouverneur De Rouville restaurant, we felt the first few drops of rain, which quickly turned into a deluge.

After moving inside, we found ourselves trapped as streets quickly flooded, cars floated by, and the lightning refused to relent. After about four hours, when it was clear the rain was not going to stop, we ran across the street through knee-deep puddles to our hotel, Kura Hulanda.

By the next morning, Tomas had departed, leaving 10 inches of rain and millions of dollars in damage in his wake. The beaches were not an option, so we made our way to the Floating Market that lies alongside the canal, with produce shipped fresh from South America every morning. Nearby, the stores in the Punda area of Willemstad range from high-end chains such as Calvin Klein and Lacoste to electronics and jewelry stores.

But most stores remained closed as they dealt with the cleanup. By the afternoon, we were feeling restless and decided to take a drive to the northwestern side of the island to see the cliffs at Boca Tabla at Shete Boca National Park. The one fortunate side effect of the storm was the sight of giant waves crashing against the rocks. The park itself has a rocky, scrub-covered landscape that looks as if it belongs on another planet.

By late afternoon, the rain had mostly stopped and the sun was beginning to peek through the clouds. In a rare and wonderful moment, we found a nearby beach with just a handful of people. We stretched out on the sand and almost forgot that a hurricane had grazed the island less than 24 hours before.

The weather was less of a concern the next day because we were planning to spend it underwater. We were headed to Substation Curaçao, which bills itself as the world’s first and only private tourist submarine. This is no glass-bottom boat. The tiny five-person submarine is certified to go as deep as 1,000 feet, among coral reefs and marine life that not even the most accomplished divers are able to observe. The $2 million mini-sub was purchased by Adriaan “Dutch’’ Schrier, the man who started the island’s Royal Sea Aquarium Resort, and who later expanded the facility to start the Curaçao Dolphin Therapy and Research Center.

Substation Curaçao seems like an ideal expansion of this aquatic empire, and after filling out several forms and hearing a quick safety lesson, Patrick and I were shoehorning ourselves into the vessel, which looks like it comes from the set of a 1970s Raquel Welch sci-fi movie.

There is nothing particularly frightening about the sub, with the exception of the price tag for an hour: about $650. This is lazy man’s scuba diving at its best. We went down to 300 feet and moved among shipwrecks and reefs. Patrick, a marine biologist and science-type by trade, pointed out all the species of fish we were observing. I was awestruck by the views.

For most of the week, we were fairly obsessed with all things oceanic, from Captain Goodlife’s tiny boat to the $2 million sub, but there is also fascinating history and culture in Curaçao, even at our hotel. The Kura Hulanda was a resort that was restored in 1998 by Jacob Dekker, a Dutch businessman. Previously a neglected and decaying portion of the Otrobanda neighborhood, the historic quarter was rebuilt by Dekker into a charming collection of hotel rooms, restaurants, shops, and even a museum dedicated to the island’s African slave trade history.

Kura Hulanda is central to Willemstad, but still feels like its own private neighborhood, a surprisingly quiet escape from the bustling town. An even more private escape was the recently opened Hyatt Regency Curaçao in remote Porta Blancu. Located on hundreds of undeveloped acres of the island, the Hyatt has sparkling new pools, a golf course designed by Pete Dye, and a wonderful restaurant named Shor. There we dined outside, looking over the ocean and the lightshow provided by thunderstorms raging far offshore.

The only drawback to the Hyatt was a hotel beach that quickly sent us back up to hotel pools. We were more than happy, however, to get back in the car and discover other beaches. In between occasional rain showers and periods of gray, we wound up at peaceful spots such as Grote Knip and Cas Abao. We didn’t even mind accidentally landing on the crowded Lions Dive and Beach Resort, where wall-to-wall Dutch tourists tipped back bottles of Amstel to celebrate the island’s bike race that week.

Those Netherlanders, along with the tropical storm, iguana soup, aloe vera plantations, and ostrich farms, were more than enough to make Curaçao a fantastic retreat from its more predictable Caribbean neighbors.

Where to stay
Kura Hulanda
Langestraat 8 (Otrobanda)
Willemstad
877-264-3106
www.kurahulanda.com
The eight-block complex of rooms and restaurants includes a casino, sculpture garden, museum, two pools, shops, and cafes. $130-$1,000.
Hyatt Regency Curaçao
Santa Barbara Plantation
Porta Blancu, Nieuwpoort
011-599-9-840-1234
www.hyatt.com
Everything about the newly opened 350-room beach and golf resort set on 1,500 acres feels luxurious. $250-$1,100.
Where to eat
Restaurant & Café Gouverneur de Rouville
De Rouvilleweg 9, Willemstad
011-599-9-462-5757
www.de-gouverneur.com
A sprawling menu in a historic building along the waterfront.
Bistro le Clochard
Riffort (Otrabanda), Willemstad
011-599-9-462-5666
www.bistroleclochard.com
Located in the historic Fort Rif, this French and Swiss restaurant has a very private patio with stunning views of the waterfront.
What to do
Substation Curaçao
Bapor Kibra (Next to Sea Aquarium Curaçao)
011-599-9-461-6666
www.substation-curacao.com
The world’s first mini-sub for tourists allows anyone to dive deep and look at sea life, $650.
Captain Goodlife
Playa Santa Cruz
011-599-864-0438
For $20, the amiable Juni Obersi will take you out in his water taxi. He will drop you at a secluded beach or take you out for snorkeling.
Dinah Veeris Den Paradara
Seru Grandi
105A Weg Nar Fuik
011-5999-767-5608
www.dinahveeris.com
The herbalist preserves native plants in her gorgeous garden. Her guided tour $6, unguided $4, children $4/$2.