A family cruise divided by 10, or is it each experience times 10? 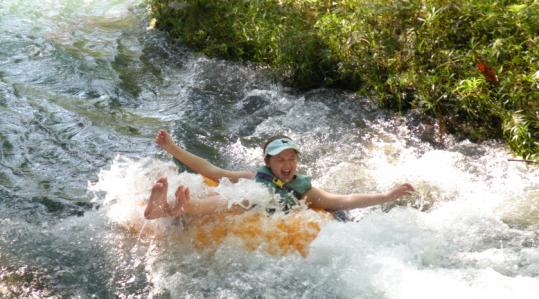 “No, it’s jade colored,’’ chimed in her brother Max.

“I was the first-grade teacher who taught colors,’’ added my stepmother, Ginny, “and I definitely think it’s aqua.’’

Peering down at the river as it snaked through the jungle-like interior, I had to agree with Ginny. We were in the hills above the town of Ocho Rios, where our cruise ship, the Ruby Princess, had docked. After a 30-minute drive on a rutted road, climbing out of civilization into an emerald green wonderland of ferns, banyan trees, and overripe bananas, we were ready for takeoff on our tubing adventure.

We planted our bums inside the tubes in the cool refreshing water and off we went with the gentle rapids through the Jamaica of yore. We cruised under a stone bridge built by the Spanish in the 17th century, and past a 200-year-old cottonwood tree, whose wood was once used by native Arawak Indians for their carved boats. Now and then the current would pick up and I’d spot my 79-year-old dad and my 10-year-old daughter whooping it up as they bounced off the rocks and each other.

This was the ideal I was searching for when I booked 10 members of my extended family on a Caribbean cruise last February. Indeed, tubing down this mountain river was the unanimous highlight of the trip. Yet, the reason we chose a cruise was not only the time we spent together, but also the time we spent apart. We each have our likes and dislikes and none of us felt compelled to be in each other’s company every waking moment of the day.

Days at sea, the two boys would hit the hot tubs under the big Jumbotron at one of the four pools and watch movies. Then they would amble over to the 15th deck to grab a slice of pizza and dessert at the ice cream parlor. The girls would be painting ceramics, swimming, or playing paddle ball on the top deck. My wife would be working out in the fitness center, taking a spin class, or indulging in a bamboo massage, where bamboo sticks are soaked in oil and rubbed against your body. Dad and Ginny enjoyed the lectures on art history and how to cook a decent gnocchi, while my sister, her husband, and I could be found reading on the 16th deck while a steel drummer played Calypso variations of classic Caribbean fare like “Copacabana.’’ I also liked swimming in one of the two adults-only pools at the fore of the ship.

We would all reconvene daily at 6 p.m. to have dinner together at the Botticelli Dining Room. Unveiled last November, the Ruby is the latest addition to the Princess Fleet. Berths were more spacious than other cruise lines I’ve experienced, equipped with a spacious balcony to take in the views. Where the ship excelled was in the public spaces, the lobbies and restaurants, with a nice mix of coziness and opulence. Kids and adults in our group sat at two separate tables with window views under the large chandeliers.

Like all cruises, dining was a gluttonous feast and the kitchen didn’t disappoint. We ate such fare as prime rib, Alaskan king crab legs, Cornish game hen, Barramundi fish, lobster tails, rack of lamb, all washed down with a good selection of wines. The children had the same menu and were treated like kings and queens by the servers as they extended their diet beyond pasta and grilled cheese sandwiches. Dressed in their finest attire on formal nights, they dug into the steak or bleu cheese burger with gusto, always saving room for that gargantuan slice of Baked Alaska or small tub of spiced chocolate pudding.

There were two other restaurants on board, Sabatini’s, featuring Italian cuisine, and the Crown Grill steakhouse, but the food was so good at Botticelli that we never felt the need to venture anywhere else. Plus, we had our special tables overlooking the water and the same servers every night granting our every wish. Dad and Ginny are lactose intolerant, and they were catered to nightly with entrees of sea bass without cream sauce, a special soy ice cream for dessert, or fresh raspberries and blackberries topped with a scoop of sorbet. The maitre’d even went out of his way to provide dairy free scones and muffins the next morning.

Stuffed to the gills, we’d waddle over to the nightly shows at the Princess Theater to watch comedians crack jokes about how much food we would consume that week, see Broadway song-and-dance numbers, and watch a Vegas-style crooner belt out Sammy Davis tunes. Much to the kids’ delight, there were also impressionists and magicians on the small stage at the Explorers Lounge. After the show, I would usually call it quits, while my ageless dad and Ginny would hit a few more clubs listening to jazz and R&B and dancing into the next day.

Flexibility even extended to our excursions away from the ship. After joining us on the White River in Jamaica, the older folks wisely decided to forgo the snorkeling-with-stingrays jaunt the next day in the waters off Grand Cayman Island. The water was calm inside the reef as we jumped off the boat onto the shallow sands of Stingray City. At first, people yelped as the large prehistoric-looking creatures bounced off legs looking for squid. Slowly, we became more relaxed as the naturalist on board held one of the stingrays and we touched its wings, which felt like slimy mushrooms. My daughter was even brave (or foolish) enough to kiss the critter.

Afterward, we went snorkeling in far rougher seas and I was happy Dad hadn’t joined us. My brother-in-law stayed on the boat, screaming for his kids to come back as waves toppled over us. After swallowing a gallon of water and seeing very little fish, I followed his cue, as did the children. Our final excursion was far more relaxed, and I wish we all had done it together, but everyone opted out except my immediate family.

When the four of us reached Cozumel, we were taken to a private beach club and jumped into double kayaks that featured a clear bottom. We paddled over a reef, spotting some blue angelfish through the water. Far superior, however, was the snorkeling we did once we left the kayaks behind. We walked up the beach and, donning flippers, mask, and snorkel, waded into an underwater national park. Within seconds, we were peering at a psychedelic-colored stingray, blue chromis, sea fans, and large brain coral. Hovering over one of Mexico’s famed cenotes, where a cave of freshwater meets saltwater, was like jumping into the local aquarium. A sea turtle floated by, dispersing schools of neon-colored fish. The more intrepid snorkelers dove underwater to spot a moray eel peeking out from behind a rock.

Afterward, we dined on freshly made chips and homemade guacamole on the white sand. Then we headed back to the ship. My wife and I headed to the 16th floor for a mojito with my sister. The kids went to play ping-pong.

When we returned from Israel in January, I would tell everyone about seeing the Western Wall and the Roman ruins of Caesarea, while my daughter would show her scrapbook full of unusual yellow toilet paper and a packet of Sweet & Low with Hebrew writing. If she were writing this story, she would have a completely different take on our cruise together. And that’s all right. Each individual gets to create his or her own cruise experience, even when traveling within an extended family.

Stephen Jermanok can be reached at www.ActiveTravels .com.

Princess Cruises
800-774-6237
www.princess.com
The Ruby Princess is offering 10-day jaunts in the eastern and southern Caribbean this fall and winter, starting at $799 per person.

Chukka Caribbean Adventures Freeport Shopping Center
Montego Bay, Jamaica
1-877-424-8552
www.chukkacaribbean.com/jamaica.php
The River Tubing Safari is one of the many adventures offered by this outfitter. Adults $66, children $48.