Iconic peaks, above and below 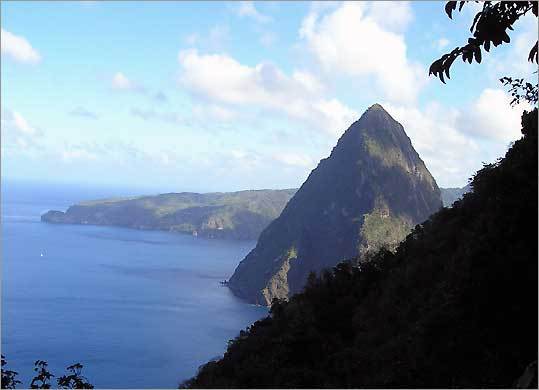 SOUFRIÈRE, St. Lucia -- On the road approaching the mountain's base, I had caught a hint of the sulfurous air that creeps southward from the nearby volcano, a dormant caldera that still bubbles and smokes with the aftermath of the blast that left the Pitons in its wake.

But on the southern flank of Gros Piton, that noxious air was gone. The trail to the peak's summit begins in a meadow fringed with all things lush and tropical: bananas, guavas, mangoes, papayas, passion fruit, and soursop. My guide, Virginia, 30, who was raised in the small, isolated community at the foot of the mountain, said the clearing's abundant flora inspired local residents to name it the Garden of Eden.

Paradise is the cliché of choice when describing Caribbean isles, but the sensual appeal of places like this corner of St. Lucia seems to make it inevitable. The Pitons , the two soaring verdant peaks on the island's southwest coast , more than any Caribbean landmark define the richness of the islands.

It's not their height that is impressive -- Gros Piton is 2,619 feet and Petit Piton, though more dramatic, only 2,460 feet -- it's their steepness and symmetry. Navigating the island's sinuous roadways, travelers repeatedly stumble upon fresh perspectives of the Pitons. The two peaks define St. Lucia: Hotels promote their ``Piton views," the mountains' profiles adorn the national flag, even the island's ubiquitous beer bears their name. So dramatic are the mountains that the United Nations named them a World Heritage Site two years ago .

Rising violently from the ocean south of Soufrière, the Pitons are indeed -- as their French moniker suggests -- brilliant green spikes, instantly identified by sailors and tourists. For the visitor to St. Lucia, Gros Piton and Petit Piton offer a concentration of much of the island's attractions: In their shadow you find evidence of the island's geological roots, turbulent history, its hospitable residents, and , above and below the turquoise waters , its rich natural life.

Dramatic in themselves, the Pitons are only remnants of a much larger mountain that exploded in a volcanic eruption more than 20,000 years ago. The caldera of that dormant volcano -- Sulphur Springs park, which St. Lucians call ``the Caribbean's only drive-in volcano" -- daily draws buses full of tourists who gather at the edge , holding their noses and marveling at the ash-laden bubbling broth.

But the Pitons themselves offer quieter pleasures to both hikers and snorkelers. I decided to sample them, first by climbing Gros Piton, later by snorkeling along the base of Petit Piton, whose vertiginous slopes plunge into the sea, transformed into steep coral walls rich in marine life.

``Some climb the mountain with their feet, most just with their eyes," said my taxi driver , Christopher . He navigated carefully along the rough, twisting dirt road that leads from the Vieux Fort road south of Soufrière to the Gros Piton Nature Trail. Several times he had to ford the L'Ivrogne River, only six inches or so deep but subject to flooding, he said.

Soon we reached the Fond Gens Libre (Village of the Free People), a community of roughly 115 residents founded during a slave rebellion in 1748. There I met Virginia, who would conduct me up and down the mountain barefoot.

The trail up Gros Piton is well constructed and easy to follow but very steep, with a vertical gain of 2,000 feet. After passing through the ``Garden of Eden," we came upon one of the caves used by runaway slaves centuries ago. It was about 20 feet in diameter and at most three feet high, and must have been cramped quarters indeed for the dozen or more people who hid there.

Halfway up, we rested at a cliff that gave us the hike's best views of Petit Piton to the north. The smaller but steeper twin can also be climbed, but only by those in very good shape and able to pull themselves upward on fixed cables.

The second half of the hike up Gros Piton is much steeper, and in places straddles steep cliffs. Wooden railings have been installed in places to keep hikers safe. At the top we arrived among a trove of wild tobacco plants, and the trail diverged. To the right it ended at a small clearing where you can see the southern part of St. Lucia at your feet, and, on a clear day, the island of St. Vincent. To the east is Mount Gimie, at 3,118 feet St. Lucia's highest mountain. Backtracking, we soon reached a vantage point to the north, where we could again glimpse Petit Piton, somewhat obscured by the jungle around us.

Our descent was on the same trail we climbed. The hike takes about four hours , although another guide said some out-of-shape hikers had taken seven hours the day before.

Climbing the mountain reveals only a partial glimpse of the Pitons. Like an iceberg, the mountains' story continues under water, where their steep slopes plumb the ocean to depths of up to 1,600 feet, yielding walls of rock and coral that make a rich habitat for reef fish.

Unlike some Caribbean islands, where snorkelers must be ferried to coral reefs, this colorful world can be reached near Soufrière by simply wading in from shore.

The day after I climbed Gros Piton, my family and I visited Anse des Pitons, the bay that separates the two mountains. It is the site of a large luxury hotel, the Jalousie Plantation, but visitors have access both to the beach and to the hotel's dive shop and beachside restaurant.

The view from the shore is spectacular, with Gros Piton looming overhead on the left and Petit Piton on the right. At the base of the smaller mountain, a line of small buoys mark s off a narrow marine park hugging the shore where snorkelers can swim a safe distance away from boat traffic.

The reef, which in spots is only a few feet below the surface, is rich with brilliantly colored fish and coral: yellowtail damselfish , stoplight parrotfish , triggerfish , scrawled filefish , barracuda, squirrelfish, and of course sergeant majors that dart amid colonies of sea fans, gorgonia , staghorn and brain coral , and barrel sponges. Within a few feet of Petit Piton's base, we saw a flotilla of eight tiny reef squid , grouped in a line, which darted away at our approach, then formed again instantly in the same pattern.

A few feet farther out, the reef drops precipitously, out of the range of snorkelers but popular among scuba divers for its visibility.

On the far side of Petit Piton, below the north-facing slopes of the mountain and more easily reached from Soufrière, is the tiny community of Malgretoute . Because there is no big resort there and the beach is rocky, Malgretoute reveals a quieter side of the mountain. Still, it offers excellent underwater reefs to explore, and a small, sleepy snack bar named Benny's. When we visited , we had the beach and the reef to ourselves.

Floating in the water there as I paused from snorkeling , I looked up at Petit Piton's towering wall draped with near-vertical greenery. A hummingbird darted among the vegetation, a dark-green blur at first, then frozen in place like an ornament hung on a tree. Its movements echoed those of the colorful fish below me. The symmetry of the life above and below the waterline seemed to echo the symmetry between Petit Piton and its twin. All seemed right with the world -- sort of like paradise, I'd guess.