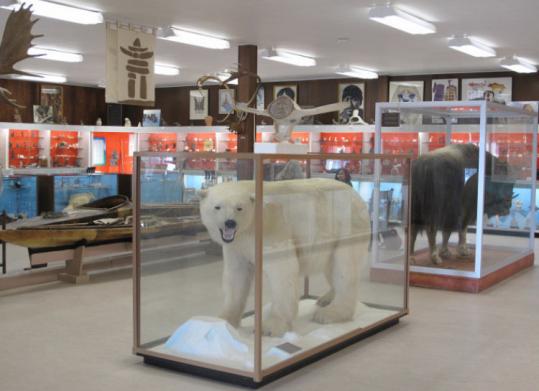 The Eskimo Museum in Churchill, Manitoba, is a “treasure house’’ of art and artifacts of Canada’s native peoples. (Hilary Nangle for The Boston Globe)
By Hilary Nangle Globe Correspondent / May 8, 2011

CHURCHILL, Manitoba — Most people come here to see polar bears. Some come to kayak or snorkel with beluga whales, a few to view the northern lights. While nature-based tourism is the lure, Churchill’s arts heritage is reason enough to visit this tiny town just south of the Arctic Circle, where tundra meets timber and the Churchill River flows into Hudson Bay.

Churchill is the gateway to Canada’s north, a harsh, treeless world of rock, ice, snow, and sea that is rife with wildlife. Over the centuries, the Inuit, Dene, and Métis peoples have drawn from the land not only their tools and materials with which they create — artstone, ivory, bone, and fur — but also their inspiration. From ancient carvings to contemporary drawings, their art reflects their lifestyle, culture, and spiritual beliefs.

The soul of Churchill’s arts heritage is the Eskimo Museum, owned and operated by the town’s Roman Catholic mission. Oblate missionaries began living among the native peoples here in 1912, and over the years they collected carvings of stone, bone, and ivory along with other artwork and artifacts that documented their makers’ worldviews. In 1944 Bishop Marc Lacroix opened a museum to display the works and educate visitors about Inuit culture. Today the collection comprises more than 800 contemporary sculptures and about 3,000 prehistoric and historic artifacts.

“I think the collection tells the story of ingenuity in the face of harsh living conditions; the missionaries were very interested in that,’’ says curator Lorraine Brandson. “They encouraged people to explain their way of life by making carvings and bringing them to the missions as a way to open a conversation.’’

Brandson’s interest parallels that of the early missionaries. “I’m always amazed at the cultural ingenuity from the technical aspect,’’ she says, gesturing to a carving depicting a hunter harpooning a seal through a breathing hole.

The museum is neither large nor sophisticated, but it is, as Brandson says, a “treasure house.’’ Glass cases filled with ancient tools and carvings made from whalebone, antler, ivory, basalt, soapstone, and walrus tusk line the walls. All are remarkable in their detail. “The Inuit have an intimate knowledge of the land and what’s out there. They had to, or they wouldn’t survive. They’re keen observers, and they take that to art,’’ Brandson says.

Some of the sculptures interpret natural phenomena such as the northern lights, or show activities such as seal, bear, and muskox hunting, fishing, and dogsledding. Others are functional, such as spearheads and fish hooks carved from ivory. A few show the gradual transformation of the north as modern ways were introduced, such as a carved walrus tusk depicting the area’s first airplane landing, and a chess set, with igloo castles and bear pawns.

“It’s very obvious from the sculptures that the Inuit believe both humans and animals have souls and that each species can transform into each other,’’ Brandson says. “You can see that in the carvings. For them, what you see, what you’ve seen, what you dream is true.’’

While the sculptures are the heart of the collection, other displays complement them. Gazing from sculptures depicting a polar bear or muskox hunt to taxidermy mounts of each helps put the event in context. I imagine skimming across Hudson Bay in kayaks crafted from caribou skin, dressed in sealskin and animal pelts.

Similar traditional garb is sold at the Northern Images gallery a few blocks away. The gallery, a division of the Inuit- and Dene-owned Arctic Co-operatives Limited, supports the culture and the artisans, says manager Brenda Atkinson. Also here are sculptures, wall hangings, prints, and crafts. Many are decorated with icons of the north: polar bears, whales, ptarmigan, and dogsleds.

Just down the street is Penny Rawlings’s Arctic Trading Co. “My main objective is to buy from as many different native groups across Canada as possible, to promote Canadiana,’’ says Rawlings, who has been working with native artists since 1978.

Beadwork, one of the store’s specialties, decorates mittens, purses, slippers, and mukluks. “We collect the beadwork from all over the province,’’ Rawlings says. She also employs in-house artists, who often have learned the craft from their parents or grandparents. It’s tedious work, tracing the pattern onto the leather, and then stringing the beads and sewing them on. Beading a pair of moccasin vamps can take six to eight hours.

Beading is familiar to me, but not so birch bark biting, a traditional Cree art form that uses the same technique as making a paper snowflake. “I think originally it might have been used as a pattern for beadwork,’’ Rawlings says. “The artist takes a paper-thin piece of birch bark, folds it into quarters, and then uses the eye tooth to tap into the bark.’’ When opened, the result is a lacey symmetrical pattern that appears like an etching in the white bark.

Sharing the wall are framed works of brightly colored three-dimensional flowers on velvet backing. “That’s caribou and moose hair tufting,’’ Rawlings says. She also employs artists who specialize in this art form. To tuft fur, the artist takes dyed animal hair and pulls bundles of it through a backing with a needle, loops it, and then knots it in place, before trimming it. Rawlings points to another framed work. “That’s caribou fur sculpting. It’s a new art form devised by Myrtle de Meulles,’’ she says.

“How often does someone get to create a whole different art form?’’ says de Meulles, a Métis elder and storyteller, when I meet her at the nearby Métis Heritage Hall. The idea came to her in a dream. “All of my good ideas come in dreams,’’ she says.

She begins by sketching a design on the back of a hide. Then she cuts it apart, turns the pieces over, and trims the fur. She carves in the details, such as the wings of an eagle, using sharp scissors. “It brings it out as a real image,’’ she says, pointing to a detailed scene depicting whales, polar bears, and the northern lights.

De Meulles’s designs draw from her heritage, and as she starts relating stories of her life and her people, I begin to understand the art of the north. The sculptures, wall hangings, moose hair tufting, and caribou fur sculpting are not simply decorations, not just art using local resources, but cultural artifacts, ways of preserving traditions, telling stories, and keeping a heritage intact.

On my last day, I meet Carolyn Bjorklund, a Dene elder who is zipping around town on a four-wheeler. I can’t help but admire her handsome beaded leather mukluks. “I make these and mittens,’’ she says. I want a pair, but she needs three days to craft mittens. “When I return,’’ I tell her, and as I say the words, I know I will. The northern lights are what brought me here, but it’s the people, the art, and the heritage that will bring me back.

Hilary Nangle can be reached at www.mainetravelmaven.com.