Kingsbrae Arms a sumptuous destination all its own 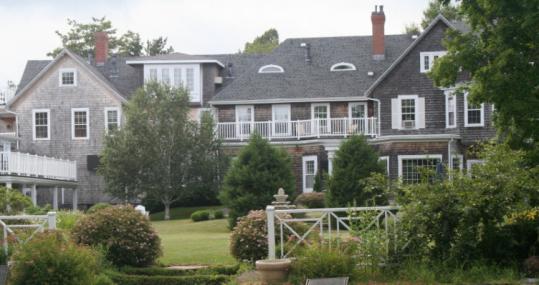 By Stephen Jermanok Globe Correspondent / May 8, 2011

ST. ANDREWS — When Harry Chancey and David Oxford first saw the country manor that would become their cozy yet sophisticated inn, Kingsbrae Arms, it was not love at first sight. The turn-of-the-century estate had been abandoned for over a decade and was in need of extensive restoration. But the two men saw the potential of the house and exquisite grounds, which sit next to a 27-acre, city-owned garden that would open to the public in 1998, the same year Kingsbrae Arms was selected as the first Relais & Châteaux property in Atlantic Canada.

As former owners of the Centennial House in East Hampton, N.Y., Chancey and Oxford knew a thing or two about refurbishing a classic home. Kingsbrae Arms was built in 1897 by a family with holdings in Shanghai who filled the house with Chinese porcelain, jade, screens, and furniture. The innkeepers used this history to blend Oriental rugs and vases in the parlor with a rich Canadian flair in locally made birdseye maple canopy beds and mahogany armoires in the guest rooms.

Trying to work their magic indoors, the duo could not resist being outside, seduced by the resplendent garden. Sitting on a peninsula surrounded by the sea and steady trade winds, St. Andrews provided an ideal climate for both flower and vegetable gardening. That, coupled with a bounty of seafood from the Bay of Fundy, had the innkeepers quickly immersed in the locavore culture.

“We met Tim the lobster fisherman, and Dwight the mushroom forager who would deliver fiddleheads in May, chanterelles in August,’’ said Chancey. “We realized it was foolish to have the same menu every evening. Depending on what our purveyors brought to us each day, we would create a different multicourse menu that night,’’ he said.

Last July, I caught up with Chancey and his chef, Scott Johnson. First stop was the inn’s organic vegetable and herb garden, where plantings included licorice-tasting tarragon, nasturtiums, spotted trout lettuce, and Ronde de Nice, a nuttier squash most often found in Provence. These are supplemented with tomatoes, beets, and carrots farmed down the road.

The main entree that evening was a line-caught halibut, courtesy of a fisherman who dropped off a 24-pounder. We started with a Jonah crab and periwinkle mousse, chock-full of meat, and a lobster and scallop soup. After a salad of fresh greens topped with New Brunswick blue cheese, came the halibut. The meat, lightly flavored with butter, salt, and dill, was so fresh it cut like a slice of salmon sashimi. We ended with wild blueberry cake, topped with mint ice cream, made, once again, from local product.

Johnson is returning to his native Maine this summer. Taking his place will be French-trained Guillaume Delaune whose resumé includes stints at -starred restaurants including Roger Vergé’s Le Moulin de Mougins in the French Riviera, and more recently, as sous chef at XO, the restaurant inside the St. James Hotel in Montreal.

“My passion for cooking started when I created my first menus from a fish I caught myself,’’ said Delaune. It sounds as though, like Chancey and Oxford, he has found an ideal spot.