Floating in the wild, trailing orcas and other beasts 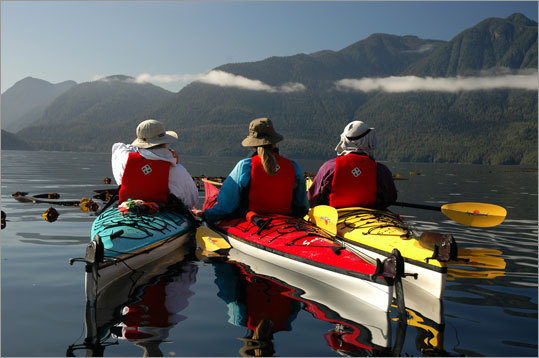 JOHNSTONE STRAIT — We sat on a rocky ledge 15 feet above the water watching the moon rise over Vancouver Island, just 3 miles south across a salty strait. A light haze hung in the air and the mountains stood dark against a twilight sky.

My fellow campers and I took turns looking through a high-powered spotting scope to view the moon’s deep craters, while others kept their eyes on the water in search of porpoises, sea lions, and orcas. Several puffs of vapor wafted across the water and soon we had spotted two orcas arching out of the water as they passed through a moon beam reflecting on the channel. At such a distance, the whales lacked detail, but their tall dorsal fins gave them away.

Two passed by, followed by a third.

“Pffff,’’ we heard from somewhere just offshore. “There’s another one,’’ someone said.

“No, that’s a Dall’s porpoise,’’ said Pilkington. “You can tell by the sound of the blow’’ — a short, small burst of air.

Since it was our first night in this remote setting in southern British Columbia, we had several more days to learn the subtle sounds that distinguish the area’s marine life.

We had signed up for a four-day kayaking adventure on the Johnstone Strait, where we would stay at a wilderness base camp on West Cracroft Island. The camp overlooked a mountainous, undeveloped stretch of Vancouver Island’s east coast, and the adjacent Robson Bight Ecological Preserve, a 2-kilometer-wide, 9-kilometer-long protected marine zone. The preserve harbors big schools of salmon and draws more than 200 killer whales, or orcas, to feed from June to October. From here, we would explore small coves in search of wildlife such as black bears and bald eagles, and, we hoped, see orcas as they cruised along British Columbia’s Inside Passage.

Our group included five solo travelers, two friends, and one couple. Two participants lived on Vancouver Island, but others had come from as far away as England and Australia. We ranged from novice kayakers who sometimes held their paddles upside down to competitive kayakers like Greg Roberts, 44, who had been on extreme paddling trips in some of the most treacherous waters in the world.

Getting here proved adventure enough. From Vancouver, the main entry point for most visitors, it took two ferry rides and a 2-hour drive just to reach Quadra Island, where our outfitter, Spirit of the West Adventures, was based. Then cellphone service shifted from sketchy to nonexistent as we motored three hours north of Quadra to the wilderness camp aboard a water taxi called the Island Fury. This leg of the journey took us through an area called The Jungle “because it’s just a mass of islands,’’ said our captain, Jock Palmer, and through the infamous Seymour Narrows, a stretch of water known for its strong rip currents, bubbling rapids, and whirlpools.

Eventually, we landed at West Cracroft Island, where Spirit of the West Adventures had constructed a seasonal camp on that rocky ledge overlooking 5,000-foot peaks and one of the last old-growth stands on Vancouver Island. The camp had a kitchen and lounge area made of driftwood, and eight tents pitched on individual wooden platforms that faced the water. Each tent had a canvas tarp overhead for rain protection, and we could store food and other supplies in bear-proof storage containers.

After a briefing that addressed the area’s “hazards,’’ such as how to deal with a cougar or black bear encounter (“yell loudly’’ if you see a cougar, Pilkington said, and “back away slowly’’ if you come across a bear), we set off in our kayaks, spending the afternoon getting familiar with the boats and the area.

“Do the orcas come here to feed or mate?’’ someone said, as we floated among the bull kelp in a small cove.

“They come here to feed, form super pods, mate, and rub on the beaches,’’ said Pilkington. “There are four rubbing beaches in the area, which is very unique. Orcas go there to rub their bellies and the tips of their fins on the sand. Researchers think they do it for fun, for pleasure, and to get off the parasites.’’

All we spotted that day were a couple of seals and plenty of purple starfish clinging to barnacled rocks along the shore. The next day, we paddled west along undeveloped West Cracroft Island. We saw a bear walking along a beach, a half a dozen Dall’s porpoises, a sea lion, and one orca on the other side of the channel. We passed Swaine Point, where researchers have placed a hydrophone underwater that captures and broadcasts live orca sounds on a local station, ORCA-FM (88.5 FM).

After crossing the channel to Vancouver Island, we had lunch on an unnamed beach, where we ran into a man in a rowboat with a makeshift sail who was attempting to circumnavigate the island with his dog. Still, no orca close-ups.

Day two brought much of the same: We spotted porpoises, sea lions, and lots of starfish, plus a pod of transient whales off in the distance as we were paddling back to camp. At night, we sat on driftwood logs around the campfire or explored until the last light disappeared around 8.

The food rivaled any backcountry fare I’ve ever had. One night, we had wild coho in a teriyaki sauce, dill potatoes, whole-wheat baguettes with basil, tarragon, and garlic butter, and caramelized bananas with brown sugar, raisins, rum, and whipped cream. One morning, we feasted on “fruit of the forest’’ pancakes, which had salal berries that one of our guides had picked just minutes before.

Day three began with an unusual twist: “Did you see the bear this morning,’’ Mariano Cash, another guide, asked me. “It was six feet from your tent, turning over rocks.’’ Thankfully, I hadn’t heard a thing.

As we set off from camp that final day, we saw another bear on a beach, flipping over big rocks as if they were pebbles. Even from a couple of hundred feet away, it looked bigger than my tent. A sea lion popped up just 30 feet from us as we paddled and an eagle watched us from its perch on a small island.

That afternoon, our guides spotted two pods of orcas heading our way, one of which was swimming up the middle of the strait. We paddled toward the middle of the channel and positioned ourselves so we would remain more than 300 feet from them and out of their path. We stopped and watched. The orcas swam closer and closer. They would probably pass a few hundred feet to our right, Pilkington said. Then he realized that they had changed course.

“Back up!’’ Pilkington said, and we quickly back-paddled.

The whales approached faster than expected and were suddenly right beside us. A brief silence was followed by a burst of air and a splash as one whale surfaced just 25 feet away, its 6-foot-tall dorsal fin looming overhead. All that came to mind was that there was a giant body below that enormous fin. I felt small and powerless, yet I was mesmerized by this majestic animal.

No one spoke as the whales swam past. Then someone broke the silence: “That was worth it.’’

“You don’t know whether to take a photo or just experience it,’’ someone else added.

“I don’t even think I was breathing,’’ said Speakman, wiping away tears.

“That was A37,’’ Pilkington said. “You can tell because of the saddle patch [the white spot behind the fins] and the marks and scars. He’s part of a group of three orcas that they actually call the A36s. They’re extremely intelligent and playful,’’ he added. “They knew exactly where we were and came over to check us out.’’

Pilkington went on to explain that it’s OK if the orcas come close to us, but that we are not allowed to approach them within 300 feet, or to get in their way, according to local guidelines for viewing marine mammals.

We ended the day with a hike through a temperate rain forest on West Cracroft Island to a lookout point called Eagle Eye. From our cliff-top perch, we saw another pod of about 15 resident whales heading east, the perfect ending to our wilderness adventure.

“That was a pretty awesome day,’’ said Pilkington. “You don’t normally see a sea lion, a bear, an eagle, a porpoise, white-sided dolphins, and orcas up close.’’

“Or find out you had a bear foraging just six feet from your tent,’’ I added.

Spirit of the West Adventures 1380 Hooley Road
Heriot Bay, British Columbia
250-285-2121
www.kayakingtours.com
Runs four-day Johnstone Strait Ultimate tours using the West Cracroft Island camp as a base ($1,100 per person) and six-day Johnstone Strait Expedition tours on which participants paddle to the strait starting from a remote lodge in the Broughton Archipelago ($1,440).