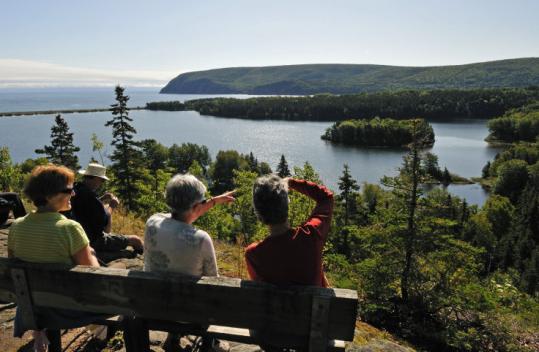 Ingonish is a rural community on the panoramic Cabot Trail, at the eastern entrance to Cape Breton Highlands National Park. (Nova Scotia Department of Tourism/Wally Hayes)
By William A .Davis Globe Correspondent / May 2, 2010

HALIFAX, Nova Scotia — By some estimates as many as 25 million people in North America can trace their family to this province in Atlantic Canada. A lot of these descendants live in New England, particularly Massachusetts.

Thanks to the Internet and its vast resources, genealogy has become a popular leisure activity, often a retirement hobby. To get Americans with Nova Scotia roots to come up and discover this beautiful and culturally rich corner of the continent along with their family story, the province has launched “Routes to Your Roots,’’ an innovative Internet and genealogy-based promotion.

The new website www.novascotiaroots.com is a combination trip planner and genealogical research tool that allows roots travelers before they set out to collect specific facts about their families along with practical travel information such as accommodations, attractions, and dining. The core of the site is a database containing 50,000 surnames going back 200 years or more, a million birth, death, and marriage records, and information on 27,000 locations.

Scottish names are particularly common here, and researching some of them in depth could take you all over the province. The website helps narrow the search.

Look for MacDonald, for instance, and more than a dozen places where that family lived in the 18th century — and where descendants live today — are highlighted on a map of the province. Orange circles mark the places, the larger the circle the greater the concentration of people with that name.

The place with the most MacDonalds is Cape Breton Island at the eastern end of the province and connected by a causeway. A famous beauty spot, Cape Breton is home to the Cabot Trail, one of the world’s great scenic driving routes. Settled by Scottish Highlanders, it is also known for its vital Scottish culture, which in summer includes Highland games, folk dancing, and bagpipe competitions.

Inside each of the map’s orange circles is a blue pin-shaped marker. A click on the pin brings up the name of the archive best able to help with family research, along with contact information and directions. For Cape Breton, this is Cape Breton University in Sydney.

Anyone searching the website for a common English surname such as Brown or an Irish one like Murphy will probably be referred to the large orange circle representing Halifax, the provincial capital and biggest city. Here the place to research your family is Nova Scotia Archives and Management, the provincial archives, with records from the entire province.

The commercial and cultural center of Nova Scotia, Halifax is an attractive city that evolved around its harbor. Looming over the city center is a massive granite citadel, built in the mid-19th century when the British Empire was at its zenith. Now a historic site and museum, in summer the citadel is the scene of military demonstrations and parades featuring kilted marchers and bagpipe bands. And, every day at noon a cannon is fired from the ramparts, just as it is at Edinburgh Castle in Scotland.

Nova Scotia also has a community of about 10,000 French-speaking Acadians who have a different history and accent from their cousins in Quebec. Most live in a string of small villages along St. Mary’s Bay in the southwest corner of the province, an area called the French Shore that is known for its natural beauty.

According to the Routes to Your Roots site, the place to research Acadian family histories — with names such as Comeau, Cormier, Belliveau, and d’Entremont — is at Université Sainte-Anne in Church Point. The university is one of the smallest in the country but has a large collection of books and documents relating to Acadian history. Sainte-Anne’s is also known for its summer French language immersion courses.

Another place to learn about all things Acadian is at The Historic Acadian Village in Pubnico, a living history museum overlooking the bay that re-creates a typical rural Acadian community in the early years of the 20th century. Pubnico was founded in 1653 and residents include many descendants of the first settlers.

William A. Davis can be reached at bill@davistravels.com.