Nature is the connector on Vancouver Island 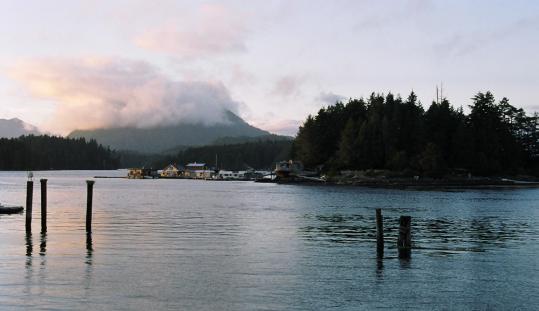 VANCOUVER ISLAND, British Columbia — We had driven for some time on Highway 4 without seeing another car, in a wilderness more vast than anything I had experienced. I checked my cellphone. No reception. A bank of clouds moved in above tall, densely packed trees and long shadows reached across our path. I envisioned grizzlies appearing from behind the trees.

My husband, Tom, and I were making a 100-mile trek to the west coast of Vancouver Island, through Pacific Rim National Park Reserve, traversing old logging roads that weren’t paved until the 1980s.

Suddenly, Tom slammed on the brakes. We had just pulled up to a single lane of traffic at the crest of a hill. Stretching down the mountainside and up the face of the next peak were cars, campers, and motorcycles, all at the mercy of a flagman in the valley.

A few hours later, with traffic a distant memory, we reached the Wickaninnish Inn, sitting on a point that extended into the Pacific Ocean. After relaxing on our balcony, which nestled in pine treetops, we headed out for a walk along the water.

Chesterman Beach is a 2-mile strand pressed between majestic Douglas firs and the sea, a shoreline speckled with broad, glistening slabs of stone. Cupped between these outcroppings, whole universes exist. In one tide pool, sea anemones waved their green arms; in another, starfish in sherbet colors lay below the surface. A bleached piece of driftwood straddling two rocks was fringed with long, thin ribbons of seaweed, from which tiny white gooseneck barnacles hung, making a delicate tinkling sound in the late afternoon breeze.

We later learned that there is a Nuu-chah-nulth First Nation expression meaning “everything is one,’’ a philosophy rooted in western Vancouver Island and very much in evidence here.

According to Curtis Cook, executive director of the Clayoquot Biosphere Trust, the Nuu-chah-nulth people have lived here for millennia. Their communities flourished along the wild, west coast, in balance with the Pacific and the ancient rain forest. But over the past 150 years, settlers engaged in unsustainable extraction of the abundant timber and marine life. By the 1980s, the damage to Clayoquot Sound from logging led to increased collaboration to protect this rare ecosystem. As a result, the sound was designated a UNESCO Biosphere Reserve in 2000.

“The interconnectedness of all living things is both a simple and complex principle. To the Nuu-chah-nulth . . . [it] is not even second nature, it is first nature,’’ Cook said. “They understand that if you harm a part of your environment, you harm yourself. Lower salmon stocks affect food supply for larger fish, marine mammals like whales, as well as bears, wolves, and humans. The impact is like knocking over a line of dominoes.’’

Artie Ahier, owner of Sobo restaurant in Tofino, considers himself a link in the area’s larger community.

“We have the glamorous end of things, but for us to look good, the salmon fishermen getting up at 4:30 in the morning on a crummy, wet day have got to be passionate about what they do,’’ he said.

“It’s a small world here on the island, on the edge of the rain forest, and we try to help each other out,’’ Ahier continued. “I can go to any of the other restaurants in town and say, I’m out of this or that, and they’ll provide it, and they know I’ll do the same.’’

Another day, pulling into the 12-acre Tofino Botanical Gardens, we were struck by gigantic-leafed, prehistoric-looking plants called gunnera, found all over the area. Beginning our self-guided tour, we wandered through the kitchen and herb gardens.

“One of our mantras is that a garden is a good place to learn how to take what we need from nature without diminishing it,’’ said George Patterson, garden director.

At the cusp of the Old Growth Boardwalk, we studied a “nurse log,’’ a miniature universe of plants and insects that transforms the dead wood into new growth. Indeed, throughout one of the few remaining virgin forests on the Tofino Peninsula, we saw huge towering trees rising from these life-giving stumps.

Eventually we reached the shore and mudflats, an ecosystem that hosts up to 330 species of 200,000 migrating birds each spring and fall. We trailed after a brilliant blue Steller’s jay with a its plumed black head, as it rustled in the bushes and darted ahead of us on the path.

Offshoots from the main forest trail lead to cul-de-sacs featuring art that celebrates the varied cultures that have made Clayoquot Sound home: the Nuu-chah-nulth people, pioneer homesteaders, Japanese fishing families, and hippies. Sculptures include a psychedelic mural on an old VW bus, a copper cougar with a verdigris coat that seemed ready to pounce, an immense primitive totem head, an elegant gray wooden heron posing in the reeds of a lily pond, and a wire humanoid stationed at a desk with a rusted typewriter.

According to Patterson, most of the sculptures are by Michael Dennis, who lives on Denman Island, off the eastern coast of Vancouver Island. He uses local, natural materials, such as salvaged cedar pulled from old logging sites, cast-off pieces that would normally be burned.

“In creating his pieces, he thinks a lot about ancestors, shadows on the walls of caves, reflection, fire,’’ Patterson said. “His work . . . addresses a lot of universal questions and concerns that everyone has — what are we, what are we a part of, where are we from?’’

Cook echoed this sentiment. “In many business meetings and presentations, a Nuu-chah-nulth blessing is given at the outset. . . . We remember that our choices and decisions can have far-reaching consequences . . . maybe not today or tomorrow but eventually. We are reminded of our responsibility and accountability to all things on this planet.’’

What to do
Tofino Botanical Gardens
1084 Pacific Rim Highway
Tofino
250-725-1220
www.tbgf.org/gardens
Twelve acres of gardens, forest, and shoreline that explore the relationship between culture and nature. Adults $10, children 12 and under free.
Tla-ook Cultural Adventures
250-725-2656
www.tlaook.com
On the “Cluptl-Chas’’ excursion, guests paddle canoes over fishing grounds as the guides tell the history of the Tla-o-qui-aht people. Return to the beach for a seafood feast.
$140 per person for six hours.
Browning Pass Charters
890 Campbell St.
250-725-3435
www.browningpass.com
On the Bear tour, it’s not unusual to see bears feeding on the shoreline, eagles on their nests, seals, harbor porpoises, blue herons, and much more. $85 per person.
Pacific Rim National Park Reserve of Canada
250-726-3500
www.pc.gc.ca/eng/pn-np/bc/pacificrim/visit.aspx
Wickaninnish Interpretive Centre includes information center, interpretive facility, gift shop, and restaurant. Adults $7.80, children 6-16 $3.90