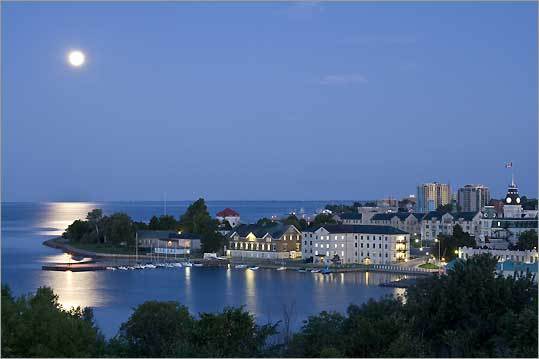 KINGSTON, Ontario - The tramp ferry from New York crosses the St. Lawrence River every half-hour. It's a short trip, but when you land in Ontario, you may think you've crossed the Atlantic instead.

Kingston is an Old World city. On Princess Street you'll find modern bookstores and Internet cafes inside Georgian brick shells built for taverns or liveries. The shutters are peeling, the tuckpointing flaking. At the Rose & Crown, an English pub, Anglo-Canadians dig into steak and kidney pie and buy their Cadbury chocolate bars.

With all due respect to the Northeastern United States, the north shore of Lake Ontario is the real New England. It was settled in the late 18th century by Tories fleeing the American Revolution - Loyal Americans, they called themselves, for their devotion to George III. More than two centuries later, their ancestors are still keenly British, remaining loyal to the crown.

Queen Elizabeth visited in 1984 to dedicate the Loyalist Parkway in honor of the pioneers who carried her great-great-great-great-grandfather's flame. The narrow streets of the city were mobbed. Marlene McCracken, chairwoman of Kingston's branch of the Monarchist League, was in the crowd. She is at every royal appearance, most recently Prince Edward's trip to Fort Henry last year.

"That's our history," McCracken says. "Canada is the way it is because we have a monarchy. Canada is a diverse country. We can appreciate other cultures more if we have those roots to fall back on."

McCracken was married on July 17, 1976, a day she remembers not just for the ceremony, but because it was the only time the entire royal family was in Canada, to see Princess Anne ride in the Montreal Olympics. That morning, McCracken was flustered because she didn't know how to do her nails. So she looked at a picture of the queen and copied her manicure.

Called "Limestone City," Kingston has a pillared City Hall, with a four-eyed cupola announcing the time in each direction, built from the stone. It's just up the waterfront from Queen's University where full-length photographs of Queen Elizabeth and Prince Philip loom over the Council Chamber. In the basement is the Royal Way, a gallery of memorabilia from the Windsors' visits.

The most colorful place to experience British Kingston is Fort Henry, built during the War of 1812 to protect the St. Lawrence from marauding American neighbors. In July and August, students dressed as redcoats perform the Sunset Ceremony with fife and drums, a drill squad, a mock battle, and fireworks over the river, to the strains of "Rule Britannia."

The United Empire Loyalists are a losing-team counterpart to the Daughters of the American Revolution. They have their own flag - a Union Jack without the diagonal St. Patrick's cross - and a Latin motto: Ducit amor patriae, or Patriotism leads me. Allison House, home of the Loyalist Heritage Centre, is a severe Victorian dwelling overlooking the Loyalist Parkway in Adolphustown. Its tall, narrow windows, peaked doorway arch, and pinch-shouldered height all suggest piety, temperance, frugality, and reverence for the crown.

That's where I met David Smith, who with two of his buddies was hitching up a bateau they planned to use at a War of 1812 reenactment in Sackets Harbor, N.Y. They are members of the Canadian Fencibles, military nostalgists who have grown from playing with toy soldiers to dressing like them, donning the kits the king's men wore in their battles against the republic to the south.

Back in Allison House, Smith and his mates sat on a Chippendale sofa, under a portrait of George III, and relived a war that every Canadian learns about in seventh grade.

This close to the border, Canadians like to distinguish themselves from their US neighbors. Smith once declared that if Ontario ever became a state, he would emigrate to Britain so he could remain a royal subject.

"In North America, what makes us different from the people across the lake is that quirk," he says of the monarchy. "When we confederated in 1867, the great threat was that once the Union Army was done, Lincoln was going to turn on Canada. A lot of Americans thought it was their destiny to possess all of North America."

In the center's gift shop I found "The Quinte Spirit," a CD of Loyalist folk songs featuring a 16-year-old Avril Lavigne, who hails from nearby Napanee. Across the road is a church cemetery with a gravestone inscribed: "William Buttan Who Died October 1843 AE 84 Yrs. also of Margaret His Wife who died February 1844 AE 80 Yrs. They came here as UE Loyalists in 1783. Fear God Honour the King."

Two miles from Allison House, the Glenora Ferry runs every 15 minutes. It crosses smooth, sheltered Adolphus Reach, landing riders on Quinte's Isle, an asterisk-shaped island punctuating the Lake Ontario shoreline. Here Loyalist Parkway signs are everywhere: silhouettes of a Colonial soldier and his bonneted wife before a giant crown. A short walk around town turns up a schedule for the local baseball team, the Dukes, and a flier inviting folks to "Discuss Our Loyalist Roots" at the Wellington Women's Institute Branch.

Beyond Quinte's Isle, but still in Loyalist country, is Port Hope. Its downtown could be the of an English village: Above the storefront awnings are ranks of high windows, set in pinkish Georgian brick. Ontario is full of four-square small towns built on the British model, but few are as well preserved. Antiques stores line Walton Street. But the most Anglocentric establishment is The British & More, which has "Coronation Street" DVDs in the window and a sign advertising a tea room.

"This part of Ontario has a lot of expats," says owner Debbie Gatien, who is from Kent. "There's a lot of retired British people here. They travel down here because they can get a lot of candy and things they ate at home. Once they come in here and buy our chocolates, they won't go anywhere else. We have Cadburys with full milk and no wax filler, like they sell in Britain."

It was mid-afternoon in Port Hope, so I had the cream tea - a pot of tea and a raisin scone with Devon double cream and strawberry preserves.

To go farther west, take the 401. There's also a more scenic drive along Highway 2 - the King's Highway. You'll run into the suburbs of Toronto where they're too modern to think of themselves as royal subjects.

Edward McClelland can be reached at tedsgarage@yahoo .com.