Out from behind the wheel to Whistler 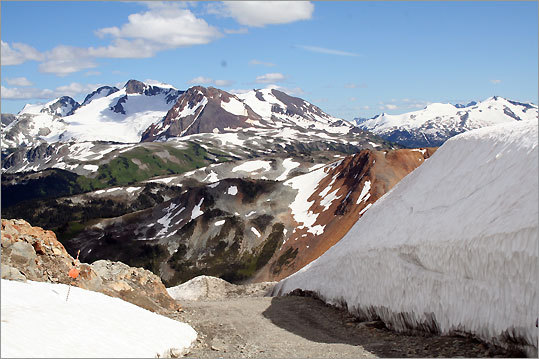 By Stephen Jermanok Globe Correspondent / May 4, 2008

VANCOUVER, British Columbia - As the train nears the town of Squamish, we round another bend and see for the first time the white dome atop 8,787-foot Mount Garibaldi. Soon the Whistler Mountaineer climbs a steep grade through Cheakamus Canyon, where a foamy river tumbles below through the craggy gorge. My family of four takes it all in as we stand in the open-air observation car, built by the in 1914. The wind whips through our hair; the brakes screech; my daughter waves at the conductor in the front of the train; and a smile seems to be permanently plastered on my face.

My usual summer vacation with the wife and kids is a long driving trip, say along the California coast, inland to Utah's five national parks, or from my house in Newton to the Amish Country of Pennsylvania. The kids are no doubt fighting over something in the back; my wife is getting car sick, and I'm white-knuckling on Interstate 95, weaving between way too many trucks. The vacation part kicks in only after we arrive at our destination.

But in British Columbia, the modes of travel are not relegated to the "How to get there" section of the story. On the contrary, they are often the highlight of the trip. Doing research last summer before our departure, I was downright giddy to learn from my wife that we didn't need to rent a car here. We could take a three-hour train ride on the Mountaineer from Vancouver to Whistler, hop a floatplane for an hourlong flight to the port of Victoria, the provincial capital, and ferry on to Seattle.

The Mountaineer leaves from Vancouver every morning in summer at 8:30. Views of the city and the forest of Stanley Park can be seen as the train hugs the waterfront, passing the exclusive homes of West Vancouver. We're sitting in the Glacier Dome seats, where the glass ceiling offers a wide open vantage point for scenery. Train staff serves a hot breakfast as we make our way into Howe Sound, a glorious body of deep blue feeding into the Pacific Ocean and backed by the Coast Mountains.

As the Mountaineer heads north away from the coast and high into old-growth forest, we stroll to the open-air compartment to watch rock climbers scurry up the cliffs outside of Squamish. The train slows near two impressive waterfalls, Shannon and Brandywine, before making its final ascent to the lofty peaks of Whistler. Some folks on board will simply head back to Vancouver on the 3 p.m. return trip, but we have plans to stay for several days.

Best known as a world-class ski resort and home to the 2010 Winter Olympics, Whistler is just as attractive in summer. We dropped our bags off at the hotel and took a gondola ride to the mountain's Roundhouse Lodge, where we had lunch on a patio surrounded by snowcapped peaks. Mountain bikers zipped by, dressed in helmets and knee and elbow pads, ready to battle the trails. Another chairlift, the Peak Adventure, took us to the summit, where we walked down 1,000 feet on a rocky path back to the restaurant. It was mid-August, and snow was still on the ground, so we had a snowball fight.

The next day Lisa and Jake went on the longest zipline in North America while Melanie and I canoed the River of Golden Dreams. A bald eagle flew overhead as we grabbed our paddles and followed the current that flowed from the eastern end of Alta Lake. We were soon navigating the narrow S-curves as we cruised through the pines, with Whistler standing tall in the backdrop.

Green Lake was our departure point for the floatplane flight to Victoria. We waited on the docks with our luggage and watched as the 18-passenger DeHavilland Twin Otter made a graceful landing and motored over to us. Boarding, we quickly learned that taking a floatplane above 8,000-foot peaks is not for the faint of heart. Sure, the scenery was spectacular as we hovered right above the serrated ridges, couloirs, and anonymous lakes, but you felt any significant puff of air would send you sprawling into that same terrain.

Jake grabbed my arm and closed his eyes as we floated over the peaks and back down to sea level. We were soon out over the ocean amid the countless islands off the coast. One of the largest, Vancouver, is home to Victoria. The plane made a sweeping descent over the skyline, splashing into the busy Inner Harbor.

Talk about wonderful planning. We grabbed our luggage and walked across the street to the Fairmont Empress, where we would stay for the next two nights. Celebrating its centennial this year, the Empress, which looks like a grand château, is known for its afternoon tea. We devoured the three-tiered tower of dainty sandwiches filled with smoked B.C. salmon and cream cheese, and buttery scones topped with strawberry preserves, all served on the same Royal Doulton china used by King George VI and Queen Elizabeth on their visit to the Fairmont Empress in 1939.

Leaving the old world behind, we hopped into a high-speed zodiac to go whale-watching. Traveling up to 30 knots and bouncing on the waves, the children laughed as we made our way out to sea. On the rocks leading to a lighthouse, we spotted sea lions and harbor seals. With Washington's Olympic Peninsula off to our right and the lights of Victoria looming to our left, the zodiac picked up speed in pursuit of a pod of orca whales. Suddenly a whale jumped out of the water, and then we saw the dorsal fin of another.

Our final stop in the province was the legendary Butchart Gardens north of Victoria. We strolled around the soothing waters and bamboo trees of the Japanese Garden, looked at the dazzling display of dahlias, and stuck our noses in many of the 250 species in the Rose Garden.

Which reminds me: When you don't have to worry about driving, you really can stop and smell the roses.

Stephen Jermanok, a freelance writer in Newton, can be reached at farandaway@comcast.net.