Straddling two worlds at the DMZ as tensions run high 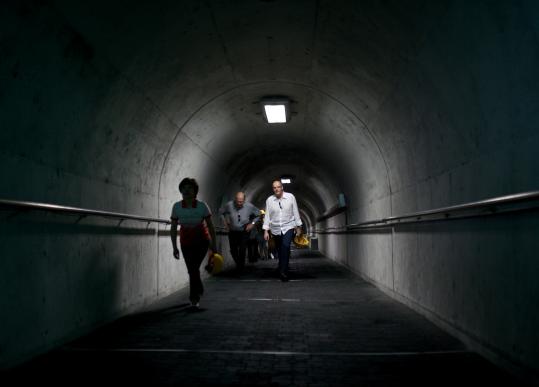 “You see that?’’ said Paul Yi, my childhood friend, pointing to an unremarkable looking Kumho Tire billboard over the highway. “It’s a tank trap. If North Korea invades, we’ll blow it up and it will block the road.’’

We were just a few minutes outside Seoul on a tour bus headed to the Korean Demilitarized Zone, which is within about 30 miles of the city’s metro population of over 20 million people.

Though the DMZ, a roughly 160-mile long, 2 1/2-mile-wide stretch of land dividing the two Koreas from coast to coast, is considered the most heavily militarized border in the world, it is also a popular tourist attraction. Paul and I had signed up for a tour of the Joint Security Area, the most militarily tense island of territory in the DMZ straddling the official border between the Democratic People’s Republic of Korea in the north, and the Republic of Korea in the south.

Besides the tank trap, one of the first visual signs of militarization on the highway out of Seoul is where the road follows the confluence of the Imjin and Han rivers, along which the border runs parallel for a while. Here one can see a continuous fence topped with razor wire, and every few hundred yards a manned military watchtower. An armistice agreement signed in 1953 means that while active fighting has ended, the two countries are still technically at war.

At the DMZ I was required to show my passport and sign the Visitors Declaration (UNC REG 551-1), which warns that: “The visit to the Joint Security Area at Panmunjom will entail entry into a hostile area and the possibility of injury or death as a direct result of enemy action.’’ It made for menacing reading, but I couldn’t help wondering why there are near-daily tours here if it were so dangerous.

By the time we entered the heart of the security area after passing through Checkpoint Charlie (Korea’s equivalent of the more famous Checkpoint Charlie in divided Berlin), our guide seemed a bit anxious, and mentioned for the third or fourth time that, “you can feel the tension in the air.’’ She warned us not to put our hands in our pockets once we left the bus, lest a North Korean soldier open fire in fear that someone is reaching for a concealed weapon.

From an area known as the Sunken Garden we left the bus in silence in two single-file lines, walked through one entrance of a large South Korean building called the Freedom House, and out another entrance to a terraced set of steps facing North Korea. A couple hundred feet in front of us was Panmungak, North Korea’s main building in the area. Between the two buildings was a row of slender, single-room breadbox-shaped structures painted in UN-blue and bisected by the official border known as the military demarcation line.

Still silent, we were led by a military escort into one of the structures, the Military Armistice Commission Conference Room, where for decades the North and South have maintained communication and tried to hash out agreements. Guarding the far exit, the door leading into North Korea, was a South Korean soldier in black aviator sunglasses standing in a modified “junbi’’ (ready) stance from Taekwondo.

“You will notice a row of microphones running down the middle of the table,’’ said our guide, noting that the microphones are left running 24 hours a day and continuously monitored by officials on both sides. “This is the official border, so half the room is in North Korea. You may walk around and take photos for a few minutes. But please don’t touch anything.’’

I had roughly two minutes to mill around in North Korea. It may only have been inside a one-room building with an armed guard blocking the exit, but the combination of nerves and excitement blurred the experience. Paul and I were still taking turns posing for photos in the North when our escorts urged us back into single-file lines and back into South Korea.

The second half of the day was more relaxed, and included a visit to the Third Infiltration Tunnel, a nearly mile-long, 6-foot-diameter tunnel allegedly built for invasion by the North Koreans. We also stopped by the Dora Observatory, a small hill from which one can see the closest North Korean city, and the world’s tallest flagpole, a 525-foot tower hoisting a 600-pound flag built to exceed a nearby South Korean flagpole that stands 330 feet tall.

These last sites had a much less serious tone. Though the area beyond the parking lot at the infiltration tunnel, for instance, was marked off as a minefield, the whole scene felt a bit like Disneyland meets the Korean War, with children running around and posing next to cartoonish statues of military police.

I was left with more questions than answers after the tour, particularly about what the DMZ means for families on both sides longing for reunification. To the south, in Seoul, are millions of young people seemingly more concerned with the latest fashions and bands than the various threats from the north, which now may include functional nuclear weapons. And to the north cycles of famine and oppresssion are said to threaten the population.

Then there is the fact that the DMZ is an accidental ecological reserve. There are plants and animals thriving here that survive nowhere else in Korea. There have even been calls to protect the wildlife in the DMZ in the future: to keep people out once there is no longer a need to keep people from crossing.

It’s a lot for a visitor to consider, especially while standing with a foot on either side of the line.

A number of organizations provide half-and full-day tours to the Korean Demilitarized Zones sites and the Joint Security Area. One cannot visit the JSA independently, and there are strict daily limits to how many tourists can enter the area. People of some nationalities may not be allowed to visit the JSA on the South Korean side without extensive background checks. Plan ahead and ask about restrictions, including dress code and age limits. The concierge desk at large, international hotels in Seoul can also help book a tour for you, though Booking through USO/KoriDoor directly is the least expensive.
USO
affiliates.uso.org/korea
The USO tour fills up early and is available only certain days of the week. Call or e-mail in advance. USO tours are booked through KoriDoor, and there is a 50 percent discount for members of the military: www.koridoor.co.kr. Combined DMZ/JSA tours cost $70 plus 10 percent tax and do not include lunch.
Korean Veterans Association/JoongAng Tour
jsatour.com/eng/dmz/main.asp
Combined DMZ/JSA tours cost $100, including tax and lunch.
Panmunjom Travel Center
koreadmztour.com/english/tour/tour2.htm
Combined DMZ/JSA tours cost $100, including tax and lunch.