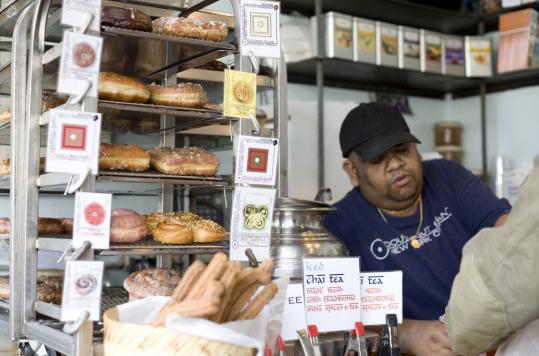 Isreal's rounds are all made from scratch, and they're bigger, puffier, and more yeasty than anything you find at Dunkin' Donuts or Krispy Kreme. They are also a lot more whimsical. He uses fresh seasonal fruits, makes his own jams, and roasts his own nuts. In this competitive city, the Doughnut Plant has a cult following and Isreal is becoming the doughnut king. His Tres Leches doughnuts (invented for Cinco de Mayo) and Blackout doughnuts (filled with chocolate pudding and topped with devil's food cake crumbs) are both classics.

All the doughnuts are made on Grand Street, Isreal's sole North American outpost. New Yorkers who aren't up for a trip downtown can find Doughnut Plant doughnuts at 40 shops, including Dean & DeLuca, Citarella, and Zabar's. Isreal doesn't ship, but he has 10 shops in Tokyo, where he sells doughnuts with glazes such as yuzu, green shiso, and black sesame. In the last year, he's also opened four shops in Seoul. Isreal travels to Asia a few times a year to visit the shops, which he owns with a partner. When he's in New York he spends most of the time at his Lower East Side bakery, dealing with the business and working on new ideas. "The creative side of it is what I really love," he says.

On the wall of the Doughnut Plant in New York, there's a black and white photograph of Isreal's grandfather, Herman, a bespectacled old baker loading gingerbread men into an oven. Herman Isreal owned a bakery in Greensboro, N.C., from 1935 to 1965. Mark Isreal, 45, was just a little boy when his grandfather passed away, but in 1994, Mark resurrected his grandfather's recipe for eggless yeast doughnuts. For five years, he fried and glazed them, mad-scientist style, in his East Village basement and sold them to shops around the city.

"This was before chefs were doing dessert doughnuts at fancy restaurants," says Isreal. "At that time, it was just the chains. I saw the possibility of taking doughnuts to an artisanal level. Nobody had done it before."

In 2000, Isreal opened Doughnut Plant in a storefront and everyone, it seems, has found him.

Artisanship runs in the family. A window seat next to the counter is tiled with multi-colored doughnut tiles made by Marvin Isreal, Mark's 77-year-old father, who lives in North Carolina. The Marvin Isreal window seat is a nice place to sit, smell the doughnuts frying, eat the one you've chosen, and watch the world go by on Grand Street. Then get a doughnut for the road.