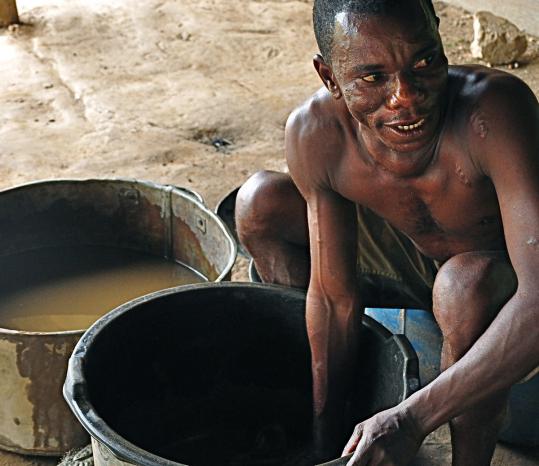 OBUASI, Ghana - A pump roars on the muddy bank of the Ofin River, drawing its yellowish waters into nearby sluice boxes. Kwami, my driver and guide, stops the car by a makeshift roadside building. The structure is humble, but I’m still excited. After all, it is a real gold mine. I am in a country that for years has been known as the Gold Coast and which has one of the largest gold reserves on the planet. Today, I’m hoping to find some.

Ghana is dotted with thousands of small and mostly illegal gold mines like the one I’m about to visit. Foreigners rarely come here, and Hadji and Isaac, two local miners, are happy to show me around. Hadji leads me toward the river and teaches me how to use a gold pan - how deep to submerge it in water, how to shake it around and around to wash out the dirt. Then Isaac takes over. His job is to mix slippery mud with mercury in order to separate the gold. He does it with his bare hands. He hasn’t heard of mercury’s high toxicity, and grins widely as he shows me a tiny nugget he has found. A day’s worth of work.

Forty minutes later, as I walk toward the car across the yellowish mud of the riverbank, I glimpse at my boots. They are covered in gold dust.

The town of Obuasi, where I plan to visit one of the largest gold mines in the world, is only half an hour away. The road we take is almost empty, its sides swollen with greenery. Each time it rains, the gold from the soil gets washed out onto the tarmac, turning it into a harvest zone for the locals, a gold bonanza.

The first obstacle in Obuasi is finding someone to lead me underground. Although the South African mining company Ashanti officially offers tours of its tunnels, they are surprised when tourists show up. The second obstacle is the gear. Almost everyone who ventures into the mines is male, and all available protective clothes are size XXL. So when I’m finally ready for the tour I look like a clown, dressed in a floor-length blue coat and boots that, at six sizes too big, fall off my feet.

Yet this fashion disaster is worth it. Led by two guides, I descend deep under the surface of Africa, stepping lower and lower into silent darkness. When we turn our headlights off for a few minutes, it’s so pitch black I can’t even tell if my eyes are still open. A strong draft makes it hard to walk, to talk, to breathe. As we reach the end of the rocky corridor, Nicolas, one of the guides, shines a light onto a wall ahead. The wall shines back: From top to bottom it’s streaked with gold.

After the tour, I head north to Kumasi, the capital of Ashanti Kingdom. Founded in the 17th century, the kingdom is still very much alive, and is a constitutionally protected state within the Republic of Ghana. “We look to our king for directions,’’ says a guide in the Prempeh II Jubilee Museum, where I admire protective amulets, royal insignia, and other artifacts of Ashanti culture. “The king is much more important to us than the president. The president lies, the king doesn’t,’’ says a taxi driver who takes me to the famous Kejetia market, the biggest in West Africa.

Heat, chaos, dust - the market is an overwhelming but fascinating place. Nearly 30 acres, over 10,000 stalls selling everything from cassava roots and fake iPhones to grilled fruit bats. Thousands of those bats blacken the sky, circling over the zoo and Mampong Road that leads to the market. Many of them are infected with rabies, endangering the lives of those who dare hunt them. Even though the bat kebabs do smell rather tasty, I am not tempted. Instead, I head to the centrally located Vic Baboo’s Cafe for a plate of curry.

After a few days of exploring the kingdom, I head south. An alarmingly speeding government bus takes me from Kumasi to Elmina on the Atlantic coast. Here, on a windswept shore, stands a 15th-century Portuguese fortress, the oldest European building this side of the Sahara. It is massive, whitewashed with black spots of mold, smelling of humidity and darkness. At the beginning it was used as a gold trading post (hence the name, Elmina, from “the mine’’). In the early 16th century, 24,000 ounces of gold were shipped from here each year. By the 17th century the story of Elmina became less shiny, as the gold trade was replaced by the trade in slaves.

Now, 400 years later, when I enter one of the tiny, damp cells of the Elmina castle, the door suddenly shuts behind me with an ominous thud. I’m trapped. For a second, I panic. I try to force the gate open. Nothing. A few minutes later a smiling face appears in the viewer. My guide. “You are lucky,’’ he says. “It was a joke. You are free to go.’’ But millions of slaves were not. From forts like this they were shipped across the ocean, never to return.

The town of Elmina has got to be a more cheerful place. All dressed in white, a wedding party parades down the dusty streets that smell of smoked fish and peeled oranges. Goats graze on banana skins, children play with kites, and colorful fishing boats bob in the small port.

If it’s peace and quiet you are after, just head not even 2 miles down the coast and you reach Elmina Bay Resort and its stunning, undiscovered beach. Coconut palms, golden sand, crashing waves, and no other tourist in sight - this is a dream come true. After dusk, when I savor a freshly caught and grilled grouper at the hotel’s restaurant, the ocean’s horizon comes alive with dots of yellowish lights. These are the boats of local fishermen, tiny nuggets of gold against the black, African night.