On the roof of Africa, every life in the wild 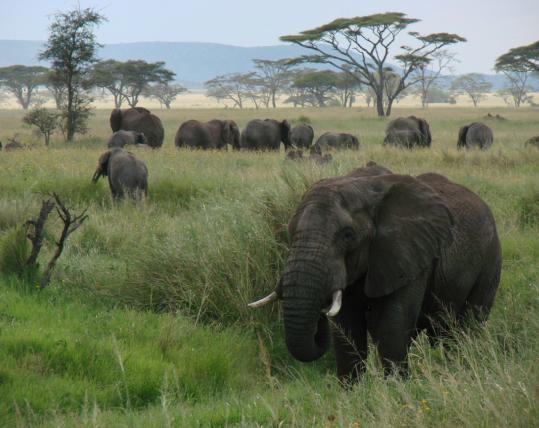 Conservation and law enforcement have helped protect some species in the Serengeti ecosystem, including elephants like these grazing in a Kenyan acacia grove. In the Masai Mara Game Reserve, with her cub beside her in the high grass, a cheetah watches her observers. (Photos By Erik Heinrich for The Boston Globe)
By Erik Heinrich Globe Correspondent / May 1, 2011

MASAI MARA, Kenya — It’s midnight on the high Mara plateau. I’m sitting next to a smoky campfire, staring up at the Milky Way — what the Masai call “the mother’s placenta’’ — listening to a troop of fearsome men sing the glories of their noble race. The hot, panting chant is like a steam locomotive that strikes fear in the heart of any living thing that might pass this way. “Huh! Huh! Huh! Huh!’’

Above it, Ole Rongo, a celebrated warrior at least 6 feet 6 inches tall, carries one storyline after another with a loud, singsong voice. There are glorious tales of lions killed in feats of valour, cattle stolen in cunning nighttime raids, and young girls’ hearts won and lost in open pastures. Each stanza ends with a single, collective “ahh!’’ — the equivalent of “Amen!’’ in this great outdoor church of the Mara, where the Masai are still masters of all they survey.

“It’s too bad we don’t have a goat to eat,’’ muses Ole Maitai, younger half-brother of Rongo whose name means cow’s harness. I turn to Ole Nasi, chief of this village. “How much for a goat?’’ We negotiate a fee of about $30 and in seconds our camp is transformed into a butcher shop.

Shanks, haunches, and rib slabs are stuck to pointed sticks and positioned over the campfire. A short while later as Ole Nasi and I work on a leg of barbecued goat washed down with Tusker beer, the chief tells me of the “mother’s placenta.’’ It turns west from here like some electric superhighway of the gods, first to Lake Victoria, the largest freshwater body on the African continent, then beyond to the Congo and Atlantic Ocean. The Masai tumbled from the placenta with their cattle and one day they will all return to it, the chief says.

Shortly after sunrise the next morning, I am picked up in a converted Land Cruiser by Tony and Jeremiah of Micato Safaris, a top operator started more than 40 years ago by Felix and Jane Pinto, a Kenyan couple. I had given up a comfortable bed in an oversized tent with a flush toilet to spend a night with the Masai, but it was worth it. Now, my pants splattered with goat’s blood, it’s time for serious safari action as it was in the glory days of Teddy Roosevelt and Ernest Hemingway.

A sleek cheetah and cub we spotted yesterday along the edges of the Masai Mara Game Reserve here in southwest Kenya are at the top of the list. We watched her stalk a waterbuck, who tore clear before she could strike with her lethal burst of speed. Today we are hoping for a kill. As we drive through open country we pass a lumbering herd of hundreds of African buffalo. The males’ curved horns can rip apart Buick fenders like soft cheese.

To the Masai the Mara is “the spotted country,’’ a name that comes from the flat-topped acacias, thorntrees, and termite mounds that cover these vast grasslands and green hills. But for all its grandeur, Kenya’s top game reserve is part of the larger Serengeti ecosystem, a territory that is perhaps Africa’s greatest remaining animal sanctuary, roughly the size of Massachusetts.

What sets the Serengeti ecosystem apart from other great African game reserves, including South Africa’s Kruger National Park and Botswana’s Okavango Delta, is that it traces the route of the Great Migration. This epic journey from Kenya’s southwestern highlands to Tanzania’s shortgrass plains is made each year by more than 2 million herbivores, mainly wildebeests and zebras. Not only do these beasts have to run a daily marathon that sucks up all their strength, but they also need to survive hazards that include crocodile-filled rivers and rough neighborhoods controlled by gangs of marauding hyenas and lions.

When I was last here 12 years ago, the migration was in decline, along with predators and most species of antelope. Since then, Kenya and Tanzania have taken impressive strides to repopulate the ecosystem by cracking down on illegal construction, farming, and poaching. Kenya has gone so far as to ban all hunting within its borders.

“There she is,’’ whispers Tony, 40, pointing to our cheetah. The cheetah is hunched over a Grant’s gazelle she must have killed less than an hour ago. She’s so close I can see her amber pupils burning like hot coals. Slowly this queen of the Mara begins to nibble on her prey.

On my last night in the Mara, I work on a whiskey sundowner from the deck of the Mara Safari Club, now part of Fairmont Hotels & Resorts, co-owned by Prince Alwaleed bin Talal of Saudi Arabia. Fairmont’s other East Africa properties include The Norfolk Hotel in the capital, Nairobi, featured in Sydney Pollack’s film “Out of Africa,’’ and the Mount Kenya Safari Club, previously owned by Hollywood legend William Holden.

I have had a stellar day. Around noon, just inside the main gate to the game reserve, we came upon more than 200 elephants in the space of 10 minutes. The sight was mind-boggling, but these days it is not unusual to find elephant herds numbering in the thousands on the Serengeti.

On the return drive cross-country we come upon lions baking on smooth stones or piled upon one another in secluded thorn bushes. Near camp I spot a scrappy, black-maned male with old scars over his snout and under his eye. Tony pulls out his phone and plays back the frenzied sound of a pack of hyenas on a kill, recorded a few weeks earlier. The solitary male immediately perks up. He can hear the party but can’t smell it or figure out where it is. Finally he realizes we are messing with him and gives me a cold stare, as if to say, “You faked me out this time. But I’ll be seeing you again.’’

Two days later I am chasing down the Great Migration on the sprawling prairie of Tanzania’s Serengeti National Park. The wildebeest and zebra hordes are still moving south, eating all the grass in their path. The altitude here is about two-thirds that of the Mara, which rises a mile above sea level, but I’m still on the roof of Africa.

Herbivores are drawn to the Serengeti plain, the biggest part of the ecosystem, by monsoon rains that turn the phosphorous and calcium-rich soil into an ocean of grass. It’s this super-nutritious vegetation that revives wildlife, worn out by the great trek, and builds up suckling calves who will need strength for the return journey north.

Late in the day we locate a column of wildebeest loping toward water 6 miles off. These long-suffering survivors are patient if nothing else. “You can stand in this same spot all afternoon and they’ll still be coming,’’ says Augustine, a professional hunter turned safari guide.

Looking north to south I can see at least 2,000 wildebeest on the move, part of a bigger mob that numbers around 20,000. They are making for a shallow creek miles south, whose water they can smell from here.

I have had spectacular encounters throughout this trek, but one piece of the puzzle is still missing. Driving to the Seronera airstrip to catch a Twin Otter bush plane out of the Serengeti, I carefully scan the thick vegetation from the raised roof of our Land Cruiser. Then as we crest a small hill, the branch of a yellow-fever acacia overhanging the road holds our prize — a young leopard swatting at flies with a long rudder-like tail. It’s a glorious sight that puts a big smile on all our faces.

Within sight of the airstrip, we lurch to a stop on the haunches of a scruffy male lion with paws the size of snowshoes. He refuses to budge. This encounter is the best farewell I could ask for and a reminder of who remains boss in this stunning wilderness. I think back to my night with Chief Ole Nasi. When the Masai return to the “mother’s placenta,’’ they will miss this beautiful and savage country.

Erik Heinrich can be reached at erik4166@gmail.com.

What to do
Micato Safaris
15 West 26th St., New York
212-545-7111 800-MICATO-1
www.micato.com
Top-notch operator makes guests feel like family. Offers a wide variety of packages and custom options, including ballooning over the Mara and the Serengeti’s Great Migration. The company over 40 years has reached beyond East Africa to include Botswana and South Africa. For information about rates and packages visit its website.
Where to stay
Micato partners with Fairmont Hotels & Resorts, which has three marquee properties in Kenya: the Norfolk in Nairobi, Mara Safari Club, and Mount Kenya Safari Club. The Mara Safari Club offers luxury tents overlooking the Mara River. For information about rates visit www.fairmont.com.
Where to eat
Bush lodges, including the Mara Safari Club, offer extensive buffet options for all meals, including a la carte and wine list for dinner. Room service available.