Roaring sound and a dense mist announce Victoria Falls, which stuns viewers today as it did the explorer David Livingstone in 1855 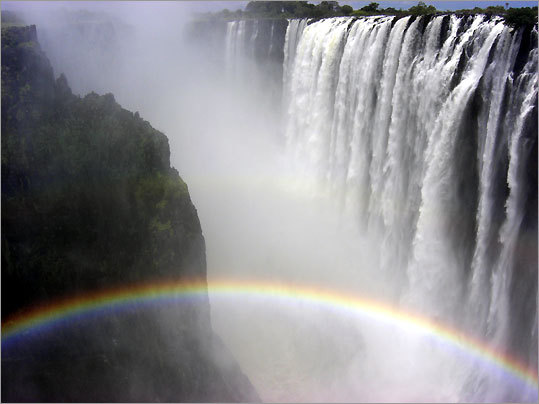 Victoria Falls is among the widest in the world. (David Abel/Globe Staff)
By David Abel Globe Staff / June 21, 2009
Text size – +

LIVINGSTONE, Zambia - Before our raft capsized in a muddy river teeming with crocodiles, before we found ourselves eye to eye with the jittery parents of a newborn giraffe, before a horde of monkeys raided our tea platter and swiped our sugar cubes, we boarded a rickety bus in sweltering Windhoek, Namibia, for a long journey into the night.

As the desert sun bled over the horizon in a rainbow of crimson, we left the Namibian capital for a 22-hour ride to Livingstone. But the trip nearly ended before it began. Shortly after the driver pulled onto the one-lane highway, two police cars with flashing lights forced us to stop on the bush-shrouded shoulder. The officers chatted with the driver, and then, inexplicably, we were off again, into an increasingly dark night, the bus’s headlights the only sign of humanity in the visible distance.

“They were my friends,’’ the driver told me later at a rest stop. “We know the police. They don’t worry us; what worries us is running into animals. They’re attracted to the headlights.’’

He said he had been luckier than other drivers and had slammed into only a few antelope-like animals in the years he had been making the night trip to Zambia. Yet the prospect of colliding with large, antler-bearing creatures provided too much roadkill for thought as we sped through the darkness. Then the air conditioning cut off, and my girlfriend and I squirmed as we tried to sleep, the sweat pooling in our open eyes as we questioned our wisdom.

It was the last leg of a monthlong trip earlier this year that began in Johannesburg, and we were ready to have someone else do the driving after navigating thousands of miles in a compact rental car on treacherous roads in South Africa and Namibia.

When we finally crossed the border a day later and arrived in Livingstone, the driver deposited us on a dusty road in the damp heat of this small, growing city, which has become an increasingly popular base for exploring Victoria Falls since the political and economic implosion of neighboring Zimbabwe. (On the map, Livingstone, or Maramba, is closely surrounded by three other countries: Namibia, Botswana, and Zimbabwe.)

Like a knight in a shiny SUV, Richard Chanter, a British expatriate and local DJ, was waiting to pick us up and take us to the nearby lodge he has owned for the past decade. He helped us get our bearings, and after much-needed showers, we set off to explore the city in the remaining light.

We walked down several small streets marked by gaping potholes and crowded with everyone from students in their bright school uniforms to the elderly hauling groceries on their heads. We found our way to the main street, where old, diesel-spewing trucks, bright blue taxis, and loud motorcycles raced around each other in an ungainly minuet. Along the side of the road, beneath decaying cement buildings, we browsed wood carvings, beaded bowls, wire sculptures, and other trinkets at the local tourist market.

The next morning, Chanter drove us through the city, to the edge of what the Scottish missionary doctor and explorer David Livingstone discovered in 1855 and called Victoria Falls, in honor of the British queen. Zambians call it Mosi-oa-Tunya, or the Smoke that Thunders, a name we would soon come to appreciate.

He dropped us off by a scrum of trinket merchants and a one-room museum, where we were directed to a gate, paid the equivalent of a $20 fee, and carefully made our way down a narrow path through a lush bower. Before we could see anything, we felt its presence. A fine drizzle began to soak us, and then we could hear the low thunder. As we made our way down an increasingly slick path, we caught a glimpse between the foliage. And there it was: the mighty wall of water and the cloud of mist rising hundreds of feet into the sky.

The 360-foot-tall falls, more than twice as high as Niagara, stretches out over a mile and is among the world’s widest. Here the wide placid Zambezi River bordering Zambia and Zimbabwe is transformed. The closer we came, the more the drizzle turned into a squall. But with rainbows arcing in every direction, wild flowers leaning off moss-covered rocks, and water cascading down in a soothing symphony, we were mesmerized for hours, oblivious to the cold shower as we dawdled along the edge and looked through the fog to Zimbabwe.

We dried off later at the Royal Livingstone, a five-star hotel less than a mile from Victoria Falls, where guests pay more than $900 a night. It was a peculiar place in a land where many people live in thatch-roofed villages, and it felt uncomfortably anachronistic with black waiters in white gloves and long-tailed tuxedos serving mainly white tourists. But we couldn’t pass up the hotel’s famous afternoon tea, and its beckoning buffet of cakes, cookies, and other gooey treats.

Any concern we had about the legacy of colonialism faded as we discovered more pressing issues. While we nibbled on crumpets and slurped pudding on the riverside patio’s leather couches, we noticed a few vervet monkeys staring at us. They seemed cute and entertaining as they frolicked on the manicured greens. What we learned was that they were even more interested in us, particularly what we had on our plates.

We soon found ourselves at the center of a daily duel between the turquoise-testicled monkeys and the patio’s lone security guard, a young man armed with just a slingshot. The monkeys worked together to foil the guard, climbing on the hotel’s roof, lurking behind the couches, feinting in different directions. Whenever the guard turned his head, they took turns darting toward our table, climbing up and grabbing whatever they could, making it a less than leisurely lunch.

“They’re very smart,’’ the guard said after one monkey crept into the dining room, opened a drawer, and rifled through it for goodies before being chased away.

The next day, after more fun with the monkeys, we unwittingly decided to test the boundaries of other wildlife in the area. We had learned that a giraffe in the bush that surrounded the hotel had recently given birth and thought we might try to catch a glimpse of the calf. A driver at the Royal Livingstone offered to take us on foot to find the giraffe, which wasn’t difficult, given their size.

But it was a brief tour. As we cut through the dense foliage following our guide, we spotted a giraffe’s pointy ears. The giraffe spotted us, too, and looked at us intently as we approached. Moments later, its mate came into view, looking at us with a less curious gaze, and then it began moving toward us.

So we ran, following him out of the bush in a sprint, at once afraid to look back and sad we didn’t get to see the baby.

Having had our fill of adventure on land, we decided to explore the river. The day before we left Livingstone, we set out on a rafting trip down the Zambezi, Africa’s fourth largest river and home to crocodiles, hippos, and something even more menacing: a series of Class 5 rapids, which the local rafting companies dubbed “Commercial Suicide,’’ “Gnashing Jaws of Death,’’ and “The Terminator,’’ among others.

We learned the power of the warm river within minutes, and over the course of several hours, we probably spent more time overboard than on the raft. At one point, one wave of whitewater overturned our boat, flipping it from the front to the back, dumping all nine of us, including our guide. I was launched about 10 feet and spent a few seconds underwater scrambling for air. It was good fun.

The guide assured us not to worry about the crocs or hippos, as the water was moving too fast for them to feed on us. But our interest in swimming flagged when we saw a few of the toothy reptiles sunbathing on rocks jutting out of the river.

By that point, the trip was nearly done, and we were on our way back to Livingstone - sore, exhilarated, and ready for a vacation from our vacation.

The next morning, after five days in Zambia, Chanter dropped us off at the small, local airport. We sucked in the humid air and admired the billowy clouds as we walked across the tarmac to our Johannesburg-bound plane.

As our plane took off and climbed into the hazy sky - we were happy to no longer be traveling on sketchy roads - we could see a broad expanse of central Africa for miles, varying hues of seemingly untouched green in every direction, except one.

Before our plane banked into the clouds, the pilot drew our attention to what looked like smoke rising from the ground. In the distance, we could see the deep gash in the green. It was our last glimpse of Victoria Falls.

Chanter’s Lodge
(See above)
Hearty local dishes, outdoor seating, and good service; about $20 for two.
Kamuza
Mosi-oa-Tunya Road
Spicy Indian food, with a Zambian twist; about $30 for two.
The Royal Livingstone
(See above)
Five-star meals. Don’t miss the afternoon tea, which features all kinds of cakes, puddings, and cookies; $18 a person.