Riads offer an exotic gamut of choices in Marrakech 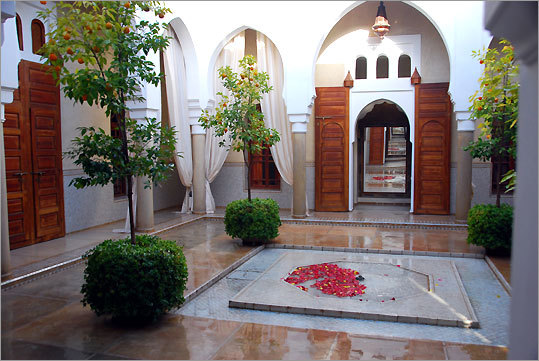 The Sublime Ailleurs riad is secluded and self-contained. Talaa 12 is located in the medina, the oldest part of Marrakech. (John Nicholas Riccard for The Boston Globe)
By Victoria Abbott Riccardi Globe Correspondent / June 14, 2009
Text size – +

MARRAKECH, Morocco -- It's hard not to fall under the spell of this place, a bewitching blend of smoking meat, colored slippers, spices, camels, and calls to prayer, all set against the backdrop of the snow-capped Atlas Mountains.

Morocco's third-largest city, founded in 1062 by a band of warrior monks from the Sahara, is cleaner and safer than ever. In addition to stylish new restaurants, nightclubs, and shops, Marrakech boasts a bevy of boutique hotels, including the recently renovated La Mamounia, a celebrity hangout of five-star luxury on the outskirts of town.

But the best lodgings are not necessarily the most expensive or elite. For travelers seeking an authentic way to experience the culture, staying in a riad is the way to go, particularly during the low season when plenty of choices are available. These traditional homes with a handful of guest rooms have authentic Moorish architecture, peaceful central courtyards, and rooftop terraces, where you can enjoy breakfast alongside views of the city.

Elana Stern, a branding specialist from Philadelphia, was searching with her boyfriend, Todd, for a place to stay here.

"We always seek out places that are unique to the destinations that we travel to and a riad was a natural place to look," said Stern. "They have a history to them, a local flair, and are run by people who live in the area." After thumbing through Fodor's, the couple settled upon recently-renovated Talaa 12. Featuring a rose petal-filled fountain in a serene inner courtyard, the seven white-walled rooms were richly decorated with woven blankets, red throw rugs, and leather cushions.

"The interior was incredibly genuine, elegant and well appointed," said Stern, who also ate dinner there one night in the cozy sitting room next to a glowing fire. "It was one of the culinary highlights of our trip," she said, referring to her vegetable tagine. "It was subtle yet spicy, and very reasonably priced."

One advantage of staying in riads is the value they offer, both for accommodations and meals. Marrakech boasts over 2,000 riads with more opening all the time, in part because buying and renovating these properties has become a popular venture. The cost to buy a riad, according to a Marrakech real estate site, ranges from about $190,000 for an un-renovated two-bedroom home to over $1 million for a fully renovated five-bedroom residence.

When choosing and booking a riad, use a reliable source, since some poor families rent rooms in their home under the guise of a riad. My husband and I used the website Tablet Hotels to choose and book four properties. In addition to informative descriptions, the website offered photos and helpful customer comments. Three of our riads, including Talaa 12, were in the medina, the old part of town.

For many travelers, staying in the medina offers both convenience and excitement. After a day spent getting lost in the labyrinth of dusty streets, stepping into the quiet confines of a riad offers instant relaxation. The atmosphere is hushed, candles flicker from cut-metal lanterns lining the path to your room, and the chaos of life outside falls away.

After several days at Talaa 12, we were curious to sample a riad outside the medina and took a 30-minute taxi ride to Sublime Ailleurs, a posh resort-style riad situated in a desert-palm grove area called La Palmeraie, where rumor has it Leonardo DiCaprio is building a home. Constructed in 2001, Sublime Ailleurs consists of two private villas and a main building sheltering four spacious bedrooms with fox quilts, red velvet drapes, and smooth stone floors.

The four rooms overlook a pillared courtyard, complete with a green mosaic tiled fountain leading to a terrace, swimming pool, and shaded gazebo set with deep white sofas. Like many of the riads in its class, Sublime Ailleurs caters to people eager to do little more than sunbathe, enjoy spa treatments, and dine by candlelight on Moroccan specialties like lamb and potato tagine in a romantic tent for two.

Back in the bustle of the old city, we checked into our third riad, Dar Warda. It was the least expensive and we quickly understood why. Hidden down a dark, stinky, cobbled alley filled with puddles and howling cats, our room was snug and had a clogged sink and shower drain.

"This riad is for those who are more adventurous," said a French woman we met who was staying at Dar Warda for the sixth time. "The staff is really nice. It's unpretentious, simple, and intimate." She was right. With only four rooms, Dar Warda was very homey. The manager was extremely nice, the bed exceptionally comfortable, and the breakfast of pancakes, honey, fruit salad, coffee, and fresh orange juice a fortifying start for a day in the souks.

One of the drawbacks of staying at a riad can be the lack of some amenities, such as a concierge or room service. In places like Dar Warda, finding someone to help make a dinner reservation, call a taxi, or bring a cup of tea was virtually impossible. Only the fancier riads, including La Villa des Orangers where we spent our last two nights, have abundant, trained staff.

Only a 10-minute-walk from the grand Place Jemaa el-Fna square, La Villa des Orangers is a quiet sanctuary with white-glove service and an understated grace. Part of the Relais & Châteaux group, it has three pools, two restaurants, and a traditional Moroccan hamman (extravagant bath), along with 27 rooms and suites and myriad sitting areas lighted by candles and shaded by orange trees. It's a bit of a splurge, but well worth it for the comfort, service, and style it delivers.

After days spent immersed in the dusty, noisy, vibrant street culture, we decided to relax at La Villa des Orangers, venturing out for little more than an occasional slipper purchase and cup of mint tea. By ensconcing ourselves in this refurbished 1920s Moroccan home, the former residence of a magistrate, we were able to fully appreciate the beauty and richness of our surroundings and of all that we had seen, savored, and discovered in this enchanting city.

Victoria Abbott Riccardi can be reached at VARiccardi@rcn.com.

Talaa 12
12 Talaa Ben Youssef
40000 Marrakech-Medina
011-212-24-42-90-45
www.talaa12.com
A small, beautifully renovated riad in an excellent location with quiet, elegant rooms, efficient service, and modern amenities, including a small spa and dinner service. Rooms from about $200-$325 with breakfast.
La Villa des Orangers
6 rue Sidi Mimoune
40000 Marrakech
www.villadesorangers.com
This luxurious riad has a spa, several pools, two restaurants, and numerous Moorish-style rooms and suites, some with private terraces. Rooms from about $455 are discounted 30 percent June 15-Sept. 10 and include transfers from and to the airport and hotel, breakfast, a light lunch, nonalcoholic drinks in the room or salon, and laundry service.
Sublime Ailleurs
B.P. Poste Principale Gueliz 2309
40000 Marrakech
www.sublimeailleurs.com
Secluded and serene, this sumptuous riad is completely self-contained with restaurant and spa services available. Rooms from about $260 with breakfast and airport transfers.

Guidebooks: Fodor's, Frommer's, and Eyewitness Travel Guides to Morocco all have listings of Marrakech riads ranging from simple to expensive.