On a timeless trek under a harsh sun and radiant stars, the beauty of the Sahara and its people is revealed 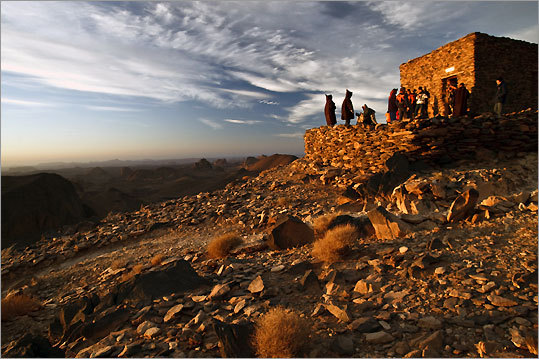 Pilgrims congregate at the hermitage of Pere de Foucauld at Assekrem in the Hoggar Mountains. (Joe Ray for The Boston Globe)
By Joe Ray Globe Correspondent / February 15, 2009
Text size – +

TAMANRASSET - In the city of nomads, a brief encounter with a half-blind nun leaves us with words to live by on a trek into the Sahara: "We only see well with our hearts."

Swallowed by the desert the following day, its foreign silence, beauty, and endlessness force me inward. I stare out from the ridge of a mountainous dune. The big issues that have not found firm homes in my heart and mind are cast onto the sand like items from a drawer flung empty.

I was looking forward to the desert void, but had no idea what to expect. A small group of friends who had been several times before organized a trip into the southern Algerian Sahara and Hoggar Mountains with a local agency. They promised we would sleep under the stars, climb dunes to their tops, and see mountains that would have made the late Western movie director John Ford green with envy.

There were a few downsides: They talked so much about the stringy camel meat we would be eating that I brought extra floss. A false alarm. There were the hygiene stories: "Showering" is a moist towelette rubdown. Asked where the restrooms are, your guide may simply grin and make a sweeping gesture across the landscape.

Desert silence is disconcerting, melting time and perspective, leaving you listening to the blood swish through your veins as Polaris and the Southern Cross play cat and mouse across the night sky. Later, the sense of time dissolves and the silence becomes addictive: literal quiet comfort that allows the beauty of the desert and the people who live here to reveal themselves.

"We don't follow time," says guide Abdou Zounga as we share a pungent lamb, barley, and vegetable stew called chorba. "No one here ever asks what time it is."

Zounga, 30, is a Touareg, desert nomads descended from Berbers who have roamed the northwest African desert for millennia. Though he earned a degree in computer programming and had a desk job in the city of Tamanrasset, the call of the desert was too strong.

"Sometimes the Touareg are hard people and the Sahara can be a hard place," says Zounga, "but even when life is hard, it is beautiful."

This is understatement. Even in the age of satellite phones and GPS tracking, the desert quickly hobbles or kills the unprepared. The traditional Touareg headscarf known as a cheche (or tagelmoust) that seemed so awkward to wear on the first day eventually becomes soothing, protecting from wind, sand, and sun. As we drive, I ask about the hundreds of car-sized mounds of rock that line the trans-Saharan nomadic trails. "Those are burial mounds that predate Islam and Christ," says Zounga.

Even with expert guides, there are moments when a visitor wonders whether they will have their own trailside tomb: Tires can blow several times a day, rims warp, wells run dry.

These situations lead to a set of survival rules. If you find water, top off your cans. If you find firewood, take it. If someone needs a hand, help him. These are not suggestions - this is the desert.

Over the course of a few days, fear of the unknown is replaced by a heightened sense of surroundings. Our first night out, we sleep beneath a freestanding rock arch hundreds of feet high. With no light pollution, the stars are so bright that picking out the principal constellations becomes tricky. Orion has a bow-shaped string of stars to his side that I've never seen and all seven sisters of Pleiades are visible. One moonless night, I take a 10-minute walk to the top of a dune and, once there, realize I've done it by starlight.

In some spots, rock formations bubble out of the ground like inverted mud pots - testament that the desert was the seabed millions of years ago. Elsewhere, top-heavy rock formations rise hundreds and thousands of feet into the air, their bases literally sandblasted by time. In one spot, heat and humidity have taken a tall column of rock and cleaved it in two, leaving it looking like a couple standing in the sand, locked in an embrace.

This beauty is the backdrop for life as a Touareg, and while nomadic life may be losing ground to the modern world, there's a romance to it that makes you believe it will hold on for a few more generations.

"One of the first things I learned as a child was respect for my elders," says Zounga, explaining a system where the final say always goes to the oldest in a group. As part of a team of guides, this might mean he calls the shots on one trip and washes dishes on the next, all depending on the ages of the others.

Aside from an old-fashioned respect for elders, one of the most important traits that Zounga explains is solidarity among Touaregs, no matter which country they are from. Another is sharing whatever you have, whether it's with someone who needs it more or as a way to express gratitude.

Salah Kberat, our lead-footed Touareg driver and guide, loses his sunglasses on one of the first days into the trip. A few days later, he hits the brakes in the middle of nowhere, makes a U-turn, and drives back a few hundred feet to where he's spotted a pair of shades in the sand that fit him perfectly. He flashes a million-dollar grin and gives a yelp of joy. Five minutes farther on, we come across a herd of goats followed by a young shepherd holding a newborn kid. Our guides stop to talk with him and, saying goodbye, load him up with oranges while Kberat puts his new sunglasses on the shepherd. Easy come, easy go - a louder yelp, a bigger smile.

These lessons become even clearer later in a wadi (dried riverbed) garden in the desert. Fearing the ethnic and religious violence in their native Nigeria, Touareg farmer and shepherd Mohamed Ali, his wife, Salaam, and their infant daughter, Zarnat, joined the thousands of refugees who have fled their country in the past year.

"Before, I was a shepherd, but my sheep were being stolen and I had to flee with my wife and child," Ali says. "Eight of us came in a clandestine taxi from Nigeria. We've had no news from our family who stayed behind."

Sitting across from Ali, it's hard to imagine - let alone digest - his story, yet some of the problems he could face here are alleviated by his Touareg roots. He has found work as a gardener in this tiny cooperative, selling vegetables to passersby and to the farm owner who sells in the markets of Tamanrasset.

At the end of our talk, he asks me to take a few photos of him and his daughter and I show them to him on the camera screen. He smiles, takes a ring from his finger and hands it to me. It's not an exchange or a veiled attempt to ask for money, but like Kberat's sunglasses, a gift.

I look to Kberat, who has been translating, on how to return the ring without insulting his friend. He says a few words to Ali, nods, and I hand it back.

"I told him that the gift was ours in meeting him."

Visa
US citizens must obtain a $100 tourist visa through the Algerian embassy. Information can be found here: www.algeria-us.org/content/view/38/35/.

Guides
A guide service is not only a must but also a legal requirement in the Algerian Sahara. Typically, you're met at the Tamanrasset airport and dropped off there when you leave. "Tam" tends to be used as a base on the first and last nights of a trip.
Prices vary by agency, whether you are traveling by 4x4 or camel, how many people you travel with, and your itinerary. Count on $641-$1,282 per week, all-inclusive. If what you eat is a concern, discuss that with your agency before you go.
Working knowledge of French is useful, but tour operators will make sure that an English-speaking translator is part of your group.

Guide agencies
Akar-Akar
Abdou Zounga and Salah Kberat's employer is one of the oldest and most respected tour operators in Tamanrasset. Food is good (three square meals a day), staff friendly, and management works hard to accommodate your needs. Their booking for English-speaking clients is run from France:
011-33-2-47-50-66-10
akar-akar.net
Agence Mero-N'Man
The agency's name translates into "what the soul desires," which is especially helpful if you wish to take a camel trek across the desert.
011-213-293-44201
E-mail mrjrouani@hotmail.com or info@meronman.com