Following your nose to a man of his craft 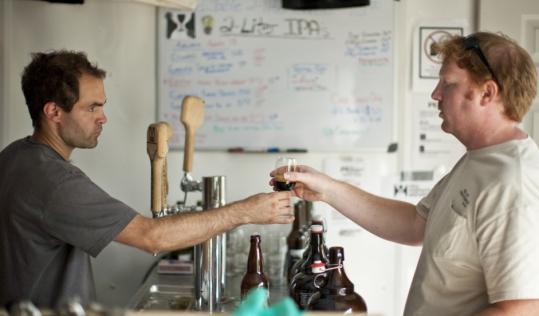 GREENSBORO BEND — To find the brewing world’s whiz kid, I drive the can’t-get-there-from-here east-west trek from New Hampshire to Vermont, with dubious cellphone service and dwindling roads that get smaller and narrower like a ball of unraveling string: interstate, state highway, county road, dirt road.

As a New Hampshire boy, I remember childhood trips into Vermont’s calmer rolling hills and deeper greens, and I like finding the Northeast Kingdom as I remember it.

It’s strange to think that some of the best craft beer in the United States is coming out of an unfinished garage in upstate Vermont — so remote that the closest well-known town is Stowe, an hour away — but here it is.

I had come to meet Shaun Hill at Hill Farmstead Brewery on a hunch. Hill had worked in Copenhagen for one of my favorite brewers, Anders Kissmeyer (former master brewer at Carlsberg), and the wonderful brewery-restaurant Norrebro Bryghus. Through Kissmeyer, Hill had pointed me in the right direction for an assignment on where to find good beer in Brussels. He gave oddly specific instructions that suggested an impressive knowledge and a funny sense that if he shared his contacts, I had better not bungle the story. He had a reverence for the brewers that suggested he wanted to become part of the canon.

I kept tabs on Hill when he returned to his native Greensboro and started his own small brewery. I had a feeling he was up to something good.

When I arrive, he’s in the middle of a phone conversation laden with beer-making jargon — clogged filters and failed beers that taste of green onion — so he shakes my hand, walks into a shed, and returns with a freshly-poured pint for me to ponder while he finishes his call.

It is a perfect introduction.

The beer — what I later learn is the Nelson Sauvin IPA — has a cloudy amber color and the nose is a wonderful wallop of green grass, pine, and grapefruit. A sip reveals a strong but not overwhelming hoppy presence with a beautiful, long, bitter finish and a bit of grapefruit tang. This trip is not in vain.

Despite his arrival on the Vermont beer scene less than a year ago, Hill is already maxed out, making a batch a day, cranking out about 20,000 gallons of beer a year, sold in kegs to local bars and in growlers from the brewery.

We sip beer and philosophize on his front porch, split a pizza, and call it a day. Before I crash on a mattress on the floor in a room that looks like it belongs on the set of “Twin Peaks,’’ I note a to-do list on the kitchen table that reads: WASH KEGS, PAINT KEGS, PAINT HOUSE, TEND TO HOPS.

His old gambrel needs some serious TLC. Even the brewhouse — essentially a freestanding oversized garage — is a work in progress, surrounded by dozens of kegs awaiting a refill. “It’s kind of a garage,’’ he says, “but I call it the brewery.’’

Hill is up tending the next morning at five, pouring a giant vat full of water that he’ll boil and “condition.’’ Making sure the water consistently tastes the way he wants it to is his first step in turning it into beer. Soon, the air is full of hot malt that smells so good, it makes me wish I had eaten more at breakfast.

Once he’s moving, talking to Hill or holding his attention gets tricky. At 32, he’s still got a bit of college boy in him and an accidental hairdo that reminds me of the spiky-haired guy in the musical group The Prodigy, but there’s also a good splash of optimism and a sense of his own potential.

“I started this company as an extension of myself. I feel guilty when I’m not working,’’ he says, before a pause. Some things on his list will wait, but not the brewery.

“Every girlfriend I’ve ever had tells me I’m challenging,’’ he adds with a smirk that suggests he might see the truth in what they’re saying — not that he’s going to change.

Though he uses the occasional exotic ingredient such as Japanese hops in the Sorachi Ace IPA, Hill is after a purity in flavor, the beautiful object derived from a true process.

Watch him work and you understand he’s got an intuitive understanding of every aspect of the brewing process. He may talk about a goal of, say, IBUs (international bittering units), or use gauges and thermometers, but he does every step by feel and taste. As he works, he listens to a mix called “For Mom’’ with Bon Iver, Ryan Adams, and Jeff Tweedy. There’s an automatic ease to his style — the sixth sense of being able to turn a valve or grab a tool without having to look at it, the odd ability to make clearing used malt from a tank look like dancing.

He’s also got a surprising bit of flex that occasionally crops up. At one point, mid-process, with eyebrows and eyelashes covered with malt dust, things aren’t going exactly as he wants and he just shrugs, says “not much you can do’’ to himself, and keeps brewing.

In the meantime, people start trickling in and out from Hill Road. They aren’t curious passersby. They are a mix of first-name-basis regulars in for a growler refill, beer geeks, and well-informed foodies on a mission. They crowd around the tiny bar in the corner of the brewery where, Wednesday through Saturday afternoons, visitors can buy a growler, watch Hill work his magic, and try a sample or three.

This day’s batch has just received a big dose of hops, delivering what he calls a desirable “dankness.’’ The beers he makes end up with near-primary colors, complimentary to Vermont’s deep greens and browns. The nose is both pure, with easy to identify aromas, and complex, going from something that’s nice to share with friends to something that can trigger an emotional response. Take a sip and you can’t help but smile.