Their familiar places put them in a creative state of mind 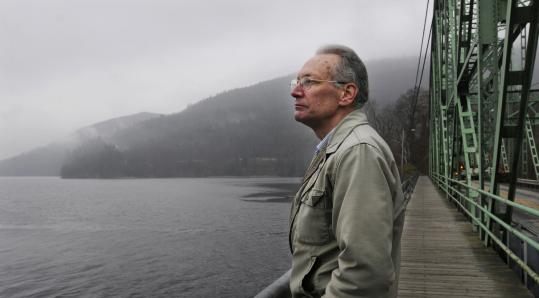 Archer Mayor on the Brattleboro-Hinsdale bridge in the city where his detective hero is based. (Christine Peterson for The Boston Globe)
By Diane E. Foulds Globe Correspondent / December 12, 2010

IRASBURG — The cliffs of Lake Willoughby plunge so deeply that “when Jane thought of the hundreds of feet of dark, frigid water just below the surface, the bottoms of her feet tingled.’’

The passage is classic Mosher. Taken from his novel “On Kingdom Mountain,’’ it is an homage to place. The heroine, Jane Hubbell Kinneson, is a wilderness holdout battling to preserve a mountain threatened by the construction of a highway.

Perhaps more than any other living author, Howard Frank Mosher’s work is steeped in the natural features of Vermont. Of his 11 books, nine were inspired by the hills and villages that loom every bit as large as the people who inhabit them. Most of them are set in the state’s sparsely-populated corner known as the Northeast Kingdom, a region fraught with contrasts — tight communities in harsh surroundings, poverty beside breathtaking views.

A realm of desolate roads where snow lingers well into April, it is also Mosher’s home. He distinctly remembers his first glimpse of Lake Willoughby’s cliffs, and how glacial they appeared. Four decades later, the image resurfaced in his prose: “She sipped her fortified tea and looked across the narrows at the soaring cliffs of Kingdom Mountain’s west side. In places, springs seeping out of the escarpment had frozen to a glittering aquamarine.’’

Ann McKinstry Micou, who studied the state’s literature for the 2005 book “A Guide to Fiction Set in Vermont,’’ discerned two primary themes: an outsider’s struggle for acceptance, and the impact of change on traditional values and lifestyles.

Crime novelist Archer Mayor might be the exception. Though his fiction is also imbued with a sense of place, he is more apt to dwell on the mundane: the Brattleboro storm drain, for instance, where a street bum hangs out in his novel “The Ragman’s Memory,’’ or the rundown buildings of Bellows Falls. Although Mayor’s hero, detective Joe Gunther, is based in Brattleboro, he spends the entire narrative of “Borderlines,’’ the second in Mayor’s detective series, in St. Johnsbury, and is often on the move.

Besides Brattleboro, Mayor says, “I’ve also chucked people over the edge at the [granite quarry], off the ferry into Lake Champlain, and down the tube of the Harriman Reservoir glory hole. In the book I’m writing now, number 22, there will be a scene at the erstwhile greyhound park in Pownal.’’

By contrast, Mosher finds so much material in the Northeast Kingdom that he rarely ventures out. Born in the Catskills in 1942 and a graduate of Syracuse University, he and his wife, Phillis, came to Orleans in 1964 to teach high school. “The snowbanks were six feet high,’’ he recalls. “It looked like an abandoned movie set. There wasn’t a soul in town except for two guys having a fistfight in the middle of the street.’’

The job interview was conducted by the superintendent, a “shrewd old Vermonter’’ whose demands left them daunted. Then he asked if they like to fish. They did. “I want to show you something,’’ he said, and led them to the Willoughby River.

“As we looked down at that water in the twilight, we saw the most beautiful trout — 20 to 25 inches long,’’ Mosher said. “You could see the crimson flash as they jumped out. They would sometimes jump three to four to five feet, and sometimes hit the ledges and flip-flop. It is one of the most splendid sights in Vermont to see.’’

That clinched it. Mosher began teaching English, his wife science, and they settled in Irasburg, a town four miles west. His first novel, “Disappearances,’’ came out in 1977, echoing that first day: ‘ “Evangeline,’ my father called. As usual he drew out her name in his best oratorical style, stressing the last syllable. ‘Spring is here, Evangeline. The trout are jumping the falls. Wild Bill and me had to boot an officer of the law down into the whitewater.’ ’’

Ten books later, the falls are still on Mosher’s list of favorite destinations, along with Lake Memphremagog. The best view, he said, is from a hill outside of Newport, where the curving shoreline reminds him of Maine. Another of his cherished spots is Wenlock Woods, a 2,000-acre wilderness-turned-wildlife-refuge that inspired his 1978 novel, “Where the Rivers Flow North,’’ later made into a film starring Michael J. Fox and Rip Torn.

Where people are concerned, the author became fascinated with Reverend Alexander Twilight, Middlebury College’s first African-American graduate. In 1836, the preacher came north and built Athenian Hall, a four-story stone schoolhouse in tiny Brownington. The story eventually found its way into Mosher’s 1989 novel, “A Stranger in the Kingdom.’’

“You could pick it up and put it down on Middlebury campus,’’ he said of the schoolhouse, “and it would fit right in.’’ The narrative is based on an infamous incident in Vermont, the 1968 shooting of a black clergyman’s house in Irasburg.

“What’s remarkable is that it’s such a tiny, peaceful-looking, pastoral village,’’ Mosher said, “and yet, at the same time, it was the site of one of the most racist incidents in New England history.’’

He used Irasburg again as the setting for “Waiting for Teddy Williams,’’ a 2004 coming-of-age story about a pitcher who wins the World Series. “A month after the book was published, the Red Sox won,’’ he said, chuckling. “Sports Illustrated called and asked if I was psychic.’’

Julia Alvarez differs from Mosher in that she sometimes sets her novels outside Vermont, even though she lives here. Yet she draws inspiration from strolling the countryside, especially the fields around Bread Loaf, the summer campus of the writers’ conference at Middlebury College.

“Bread Loaf permeates my work beyond literalness — i.e., oh, that tree is in this novel, that pasture made its way into this poem,’’ Alvarez explained. “It’s the place our songs want to get to, a silence that contains all our words and more.’’

The school does appear in some of her poetry, although it’s the atmosphere that she connects with, she said, the quality that remains after the “to do of summer is over, and the glory of autumn is gone, and the huge silence of coming winter’’ has descended.

“I can’t be there without feeling myself deep inside the work of some of my favorite writers,’’ she said. “From that spring of both writers and place springs my little rivulet of language.’’

Diane E. Foulds can be reached at dianefoulds@burlingtontelecom.net.

How to get there
Willoughby River Falls
Orleans
From Orleans, go east on Route 58, towards Brownington, for 0.2 mile. Go left at the “Brownington’’ sign and continue 0.1 mile to the Vermont Fish and Wildlife parking area.
Lake Memphramagog
Newport
For the best view, go to Shattuck Hill, which is just off Route 5 between Newport and Derby. Park in the Shattuck Hill Road turnoff across from the Community National Bank.
Wenlock Wildlife Management Area
Ferdinand
From the junction of Routes 102 and 105 in Bloomfield, travel 6.5 miles west on Route 105, then go left onto South America Pond Road and park in the lot on the right. Heading east on Route 105, South America Pond Road is about 9 miles from Island Pond.
Athenian Hall
The Old Stone House Museum
Brownington Center
www.oldstonehousemuse um.org
Irasburg
Four miles west of Orleans on Route 58.
Bread Loaf Mountain Campus
1192 Route 125, Ripton
www.middlebury.edu/blwc
Writer information
www.archermayor.com
www.howardfrankmosher.com
www.juliaalvarez.com