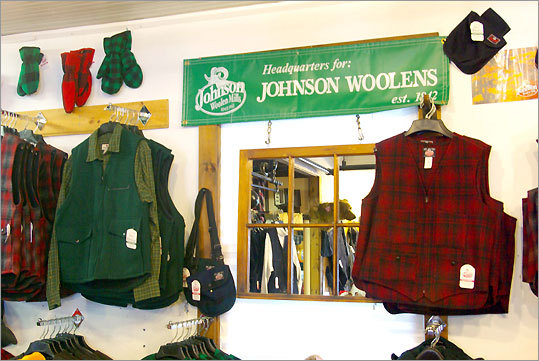 JOHNSON, Vt. - Authentic New England style never goes out of fashion: the lobsterman in yellow bib overalls, the woodsman in L.L. Bean waterproof boots, or the hunter snug in a red or green plaid Johnson jacket.

Johnson Woolen Mills opened in 1842 on the banks of the Gihon River and has dominated this north-central Vermont community ever since. You can still buy old-fashioned wool iceman's pants so heavy that they practically stand up by themselves.

But the bestseller these days, says Rachel Longley-Wood, manager of the factory store, is the red-and-black or green-and-black plaid jac-shirt.

"Hunters tend to stick with one or the other," she says. "Vermont doesn't require orange, but it's coming."

Visitors entering the store cannot help but be impressed. It looks like a plaid explosion, with racks and piles of shirts, vests, jackets, and coats for men, women, and children. Hunters mittens, caps, and suspenders (clip or button) round out the classic outfit for the autumn woods.

The woodsy plaids have acquired a certain cult following, crossing over from practical clothing into the world of fashion. Johnson even augments the bright plaids with more muted tones. The company has sought an expanded market by introducing tote and bitty bags, potholders, wine cozies, and dog beds.

The factory store occupies the original woolen mill, as Johnson no longer weaves its own cloth and does all its manufacturing in a smaller facility next door. The store is open every day, but weekday visitors often get a chance to see the factory in operation. The most impressive tool is a saw operated by two workers that cuts through a thick pile of layered woolens, making the pieces for dozens of items at once.

Of the hundreds of woolen mills that once dotted the country, Johnson claims to be one of only four left, and the only one in New England. Longley-Wood says that about 35 people work in the factory, "but we're expanding. Japan is buying from us. It's the lively colors."

At a time when most American clothing is made overseas, more than 80 percent of the Johnson Woolen Mills' revenue comes from overseas sales, as the company had to find some way to expand beyond its traditional base. No one needs more than one hunting outfit, and Johnson woolens seem almost indestructible.

Longley-Wood, a native of the village, is expecting her first child, but she's not stocking up on children's winter clothing. She's looking forward to reclaiming children's pants and jackets passed down to her from her older brother and then to their cousins. "They'll be coming back to my family now," she smiles.