A sport of kings, knights, and nomads 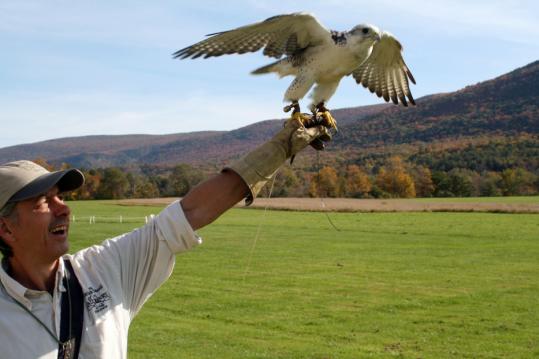 "Just hold your arm out straight, keep your hand open, and he'll come," the falconer said.

The moment peels away time and place: The signal of the raised calfskin gauntlet has been shared by ancient Persian kings, knights of medieval France, and nomads in present-day Mongolia, who trained birds of prey to hunt game for the table, and later, for sport - pheasants, rabbits, even turkeys, depending on the size of the raptor.

The romance of this ancient sport, which probably originated in central Asia at least 3,000 years ago, is one of the reasons I had leaped out of bed with unusual energy that frosty morning, flashing on images of fur-hatted Mongols galloping across the steppe with eagles on their fists. Today's introductory lesson would not be a hunt, but simply acquaint me with how a falconer handles birds.

The anticipation of working with a creature as wild and fierce as a bird of prey sent a tickle of fear down my neck, which only added to the excitement.

Now, this was it: Standing on a tall, T-shaped perch about 100 feet away, a Harris hawk stretched his black wings, more than 3 feet across, tip to tip. He dropped, cinnamon-red shoulders glowing like fiery epaulets. He swooped low across the lawn. He was coming fast.

At the last moment, he arced upward to descend upon my gauntlet from above, his leg bells jingling. Beetle-black talons, surprisingly dainty, extended from his screaming-yellow feet.

A hawk's talons can grip with a pressure of 100 to 200 pounds per square inch, allowing it to seize prey almost three times its own weight. So the barely detectable squeeze of his toes through the gauntlet came as a surprise. This hawk weighed more than a pound and a half, but felt even lighter. He gulped the smidgeon of raw beef that the falconer, Rob Waite, had smeared on my glove. The bird's beak, yellow like his feet, was hooked like a miniature scimitar.

The handsome, regal bird didn't seem to mind his folksy name. "Harris hawks are the Labrador retrievers of the birds of prey," said Waite, a native of Buckinghamshire, England, who managed this sole branch of the British School of Falconry, at the Equinox Resort in Manchester.

The breed inhabits the high deserts of Central and South America and the Southwestern United States, which are cold enough to allow the birds to acclimate to Vermont winters. Just as important, for teaching purposes, they are the rare social birds of prey, meaning that in the wild, they live in loose family groups and hunt cooperatively. This makes them easier to train to tolerate human contact than most of their loner kin. Hence, falconry isn't only about falcons, the long-winged species known for their plummeting vertical dives, called stoops.

"If you hunt with any bird of prey, you're a falconer," Waite continued. "The term is about using the bird for hunting."

This distinction, as far as he knows, sets the Equinox program apart from at least three of the four other falconry schools affiliated with luxury hotels in the country. "It's really important to us that we're not seen as doing only things that are fun to watch. We teach what a real falconer has to learn," said Waite.

Why falconry? "In a luxury hotel, golf and spas are now almost standard," said Michael Chagnon, the director of sales and marketing at the Equinox, adding that the world's oldest sport seemed compatible with the resort's other outdoorsy offerings, including programs in Land Rover driving, flyfishing, shooting, and archery - all part of the growing demand by well-heeled travelers for adventurous and educational pursuits. "Our guests like to learn something."

The lesson began with a walk through the hawk barn, where some of the birds, hearing Waite's voice, shrieked from their roomy stalls. McNabb, a cross between a gyrfalcon and a lanner falcon, roosted in aloof silence. After introducing Elsie, an African tawny eagle with a 6-foot wingspan, Waite took Elmer from his stall and walked to a tack room stocked with gauntlets, barn coats, and tall rubber boots. A scale stood on a table in front of a white board listing names, weights, and dates.

"This sport is part art and a lot of science," Waite said, weighing Elmer to check that he was at his correct flying weight of 1 pound, 6.5 ounces. The phrase "flying weight" gets at the science: feeding the bird enough to keep it healthy, yet hungry enough to return when called.

Determining this magic number relies not on a formula, but on trial and error. "When you call the bird and it just sits up in the tree and looks at you, it's overfed," Waite said.

Birds of prey don't perform to please humans, he explained. That would be a waste of calories, which they instinctively conserve to survive. Here they work for one reason: that pea-sized scrap of meat on the gauntlet. Underscoring the point, Elmer's eyes rarely stray from Waite's hand.

Waite then reviewed Elmer's gear: on each leg, a bell to help the falconer locate him in the brush (most hawks are ground feeders) and a jess, a short leather strap that the falconer wraps around his or her fingers. On one leg the hawk wore a silver band stamped with a tracking number, to identify him if he takes an extended trip. Finally, a slender plastic antenna, attached to a tiny transmitter, hangs from one leg, in case he's out of earshot.

Waite also wore some specialized gear, chiefly the gauntlet and a traditional leather hawking bag with pockets for game, lures, food for the hawk, a knife, and permits. At 43, he had practiced falconry for 29 years, starting in the countryside of southern England, where he grew up. "I was taught by the Fords," he said, referring to Emma and Steve Ford, who are among the world's leading falconry experts and the founders of the British School of Falconry. The original school is now at the Gleneagles Hotel, near Edinburgh.

The one at the Equinox, which began in 1994, has been a hit with hotel guests and the general public alike. "We had about 1,500 participants that first year, and we now have about 2,500," said Waite, who attributes growth to word of mouth and repeat visitors.

With Elmer's weight and gear checked, Waite coaxed him onto the gauntlet with a snack, passed me a gauntlet of my own, and headed for the lawn.

Waite noticed a faint breeze and shifted his position. "Hawks always fly into the wind," he said. "They hate ruffling their feathers."

With that he drew his gauntleted arm straight back and then forward, releasing Elmer's jesses. In seconds, the bird was staring back at us across the green. "Hawks can see the tiniest movement over a huge distance," he observed. He raised his arm, and Elmer glided to the glove.

Then it was my turn. Elmer hopped to my arm (for a snack) and allowed me to "cast" him into the air. Soon he was gazing at us from the perch.

"Try raising the arm without the glove," Waite suggested. I did, and Elmer didn't budge: Gauntlet equals food. "Now, the gloved arm," he prompted. Elmer swooped to my gauntlet and snatched his reward.

After that, we walked down beside a strip of woods, where Elmer "followed on," flying free and stopping to wait for us in the trees. Then he dropped into the high grass. Catching up to him, we saw that Elmer, his beak speckled with blood, had scarfed down most of a mouse. After the feast, Waite fingered the hawk's crop, gauging the amount he had eaten and mentally deducting it from Elmer's dinner.

The lesson over, Waite returned Elmer to his stall and brought out McNabb, the falcon, for exercise. The bird wore a leather hood to calm him. Unhooded, his staring eyes spoke a wilder and more chilling language than Elmer's beady appraisal. Waite cast McNabb and began swinging a lure - a pair of pheasant wings tied to a cord wound around a spool. The falcon streaked past, diving after the feathery tidbit.

Finally, Waite let McNabb catch it. The falcon mantled - covering the fake prey with his wings - while tearing out tufts of feathers. Only when Waite tossed a scrap of meat in front of the bird did it drop the lure.

We marveled at the creature's skill. "Some colleagues of mine observed a mother falcon teaching its young to hunt in the wild," Waite said. "She flew above them with a pigeon she had killed and dropped it for them to catch."

He gazed up toward a distant mountain, as if the spectacle were taking place just out of sight. "Now that," he said, "would be something to see."