University of Vermont tour touches the gold and the tarnish 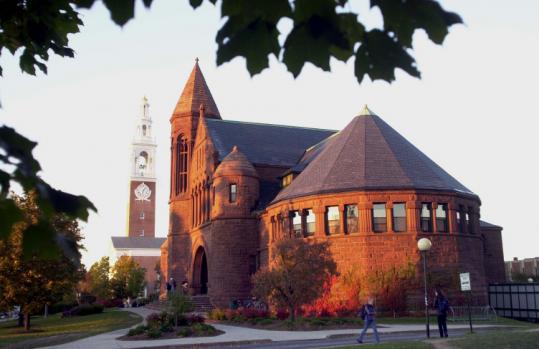 BURLINGTON, Vt. - A statue of Ira Allen stands at the heart of the campus green, his expression one of contemplation. The University of Vermont's 18th-century founder looks a model of erudition, and indeed, the institution bears marks of his influence. Its seal was forged from his design, and the chapel bears his name. But as every student learns, things are not always what they seem.

Allen was as much scoundrel as visionary. In establishing the college, his aim was not so much to enlighten minds as to elevate the profile of New Columbia, the name he had coined for the Republic of Vermont. It is one of the many revelations offered in the campus's new historic tour.

Leading the two-hour walk is William Averyt, 64, a retired UVM business professor with a passion for local history. He tells us that in 1780, Allen, who suffered legal and financial troubles for much of his life, offered to cough up 4,000 pounds and 50 acres from his real estate company if the Legislature would charter the school. His generosity was accepted in 1791, the year Vermont joined the Union as the 14th state.

It took another decade for the university to get started. "It was a heathen wilderness," Averyt said. When classes did commence, he said, "It was a one-man affair." The Rev. Daniel Clarke Sanders served as president, faculty, librarian, and dorm supervisor; the students - all four of them - lived in his two-story home. Until the early 20th century, it was customary for ministers to serve as college presidents, and chapel was compulsory.

While Sanders's home has disappeared, 12 structures in the central campus area are on the National Register of Historic Places. Among them is Billings Library, an 1888 Romanesque jewel that architect Henry Hobson Richardson considered his best work. A few of Richardson's students, who went on to form the noted firm McKim, Mead, and White, drew up the plans for the Greek-columned Waterman building along with the towering Ira Allen Chapel. Hidden within the Old Mill, a flat building reminiscent of a textile plant, is yet another historic place of worship, a dazzling second-floor chapel lined with Tiffany glass. The students gave the Old Mill that name for a reason, Averyt said: "This is where faculty grinds us down into pieces every day." Most stunning of all is the palatial Grasse Mount, an 1804 masterpiece positioned for watching sunsets color Lake Champlain.

But even more remarkable than its structures are the intellectual giants who passed through them. James Marsh, university president from 1826 to 1833, made it the first in the country with a varied curriculum offering elective courses and individual departments. It was the first to form an English department that taught Shakespeare, rather than the usual diet of Latin and Greek.

In "The Metaphysical Club," (Farrar, Straus and Giroux, 2002) author Louis Menand describes Marsh's philosophy as "educational organicism." By the time Marsh had finished, Menand writes, UVM "was one of the most respected institutions of advanced learning in New England."

Marsh's writings influenced the development of the American Transcendentalist Movement, and later, the thinking of John Dewey, an 1879 graduate. Dewey, whose grave lies beside Ira Allen Chapel, became one of the country's foremost philosophers and educational reformers. Another thinker was Frederick Billings, a lawyer and railroad magnate who graduated in 1844 and later built and endowed the Billings Library. He lined its shelves with the books of George Perkins Marsh, whose famous tract "Man and Nature" inspired America's environmental movement. Playwright Royall Tyler, who wrote "The Contrast," taught here from 1811 to 1814, and the university's main theater is named after him.

The university's history is rife with anecdotes, including the medical students who robbed graves for anatomical study, the War of 1812 soldiers who used the gold-domed university as a barracks, and the UVM president whose home was probably a stop on the Underground Railroad.

And there was the time the campus green was lost. Allen, plagued by bankruptcies and lawsuits, used it to pay off a creditor. Tried in England, jailed in France, sued by his own family, and forever falling prey to new quixotic schemes, Allen returned to Vermont in 1801 to find his commercial empire in shambles, but his university growing.

Today Vermont's largest institute for higher education has an enrollment of 10,000, and, yes, a green. Intent on resuscitating Allen's reputation, banker and philanthropist James Wilbur would pen his biography in 1928, commission the statue, donate $200,000 for the Ira Allen Chapel, and leave an archive and trust for the creation of the Wilbur Collection of Vermontiana, which came endowed with Allen's writings.

It would have warmed Allen's heart. On the lam for unpaid debts, he fled Vermont in 1803 and never returned.

Diane E. Foulds can be reached at dianefoulds@burlingtontelecom .net.

Historic tours of UVM
802-656-3131
uvm.edu/historictour
Free 90-minute guided tours of the University of Vermont campus are given at 9 a.m. on Saturdays through Oct. 11 starting from the Ira Allen statue on the campus green at Main and South Prospect streets.