Treat yourself to summer

California’s Mission San Juan Capistrano may have its swallows, but the 17th-century Baroque San Miguel church in Alfaro, Spain, is stork central in Europe. More than 400 nests of white storks cover the towers and roofs of the church. Ornithologists say it is the world’s largest single concentration of the birds. The young begin to fledge across the summer, and parents and chicks alike take to the air late in the afternoon, giving the small city an animated majesty. Happily, Alfaro is on the southern edge of the famed La Rioja wine district, where you can break from bird-watching to visit wineries and feast on distinctive northern Spanish cuisine. www.alfaro.es, www.lariojaturismo.com
PATRICIA HARRIS 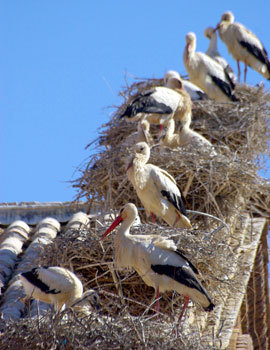